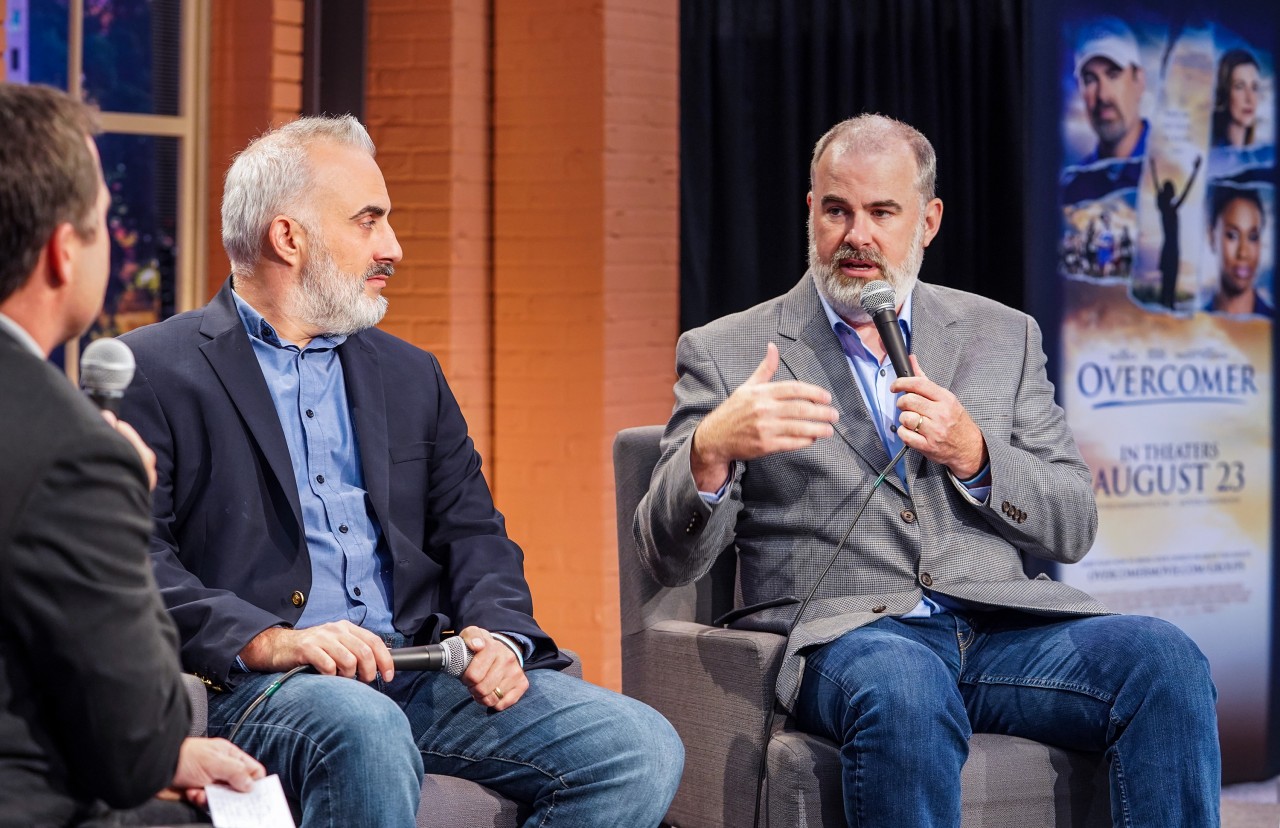 BIRMINGHAM, Ala. (BP) — Alex and Stephen Kendrick have an ambitious vision for their new movie, “Overcomer.” And the vision has nothing to do with winning any awards or box-office glory. 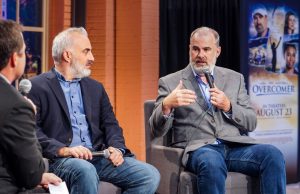 Alex Kendrick, writer and director of “Overcomer,” and his brother Stephen (center) discussed the movie (their sixth as a team) June 11 in the exhibit hall of the SBC annual meeting in Birmingham.
Photo by Kathleen Murray

Instead, they say, it’s about helping people discover their identity in Christ.

“When the church rises up and knows who she is in Christ and knows she is forgiven, redeemed, loved and chosen, she is going to operate differently,” Alex said. “We want you guys to be bold in your faith, to have the confidence to know I am forgiven because God says I am. I am loved because God says I am, regardless of my feelings and regardless of what the world says about me. That’s going to impact our behavior. That’s going to impact how we express our faith. That’s what we want with this film.”

The new movie, set to debut Aug. 23, is the sixth movie made by the three Southern Baptist brothers: Alex, Stephen, and Shannon. All three are active members of Sherwood Baptist Church in Albany, Ga. Alex and Stephen shared their hopes for the new movie June 11 during a live question-and-answer session on the Cooperative Program stage during the 2019 Southern Baptist Convention annual meeting in Birmingham, Ala.

The movie tells the story of a championship-level high school basketball coach who loses half of his team when a factory in his small-town closes and families move away. As he transitions to become the school’s track coach, he wrestles with the nature of his identity and what happens when he can no longer find his identity in his work.

“Like our previous films, we went through the stage of, ‘God, what should this movie be about? What theme should we focus on,'” Alex said. “After a season of prayer, He said, ‘Identity in Christ. Remind my church who they are in Christ.'”

The culture today, Alex noted, is trying to redefine identity and “who gets to tell you who you are.”

“We believe your Creator gets to define who you are,” he said.

The Kendrick brothers talked about some of the things they do to try to keep Christ central in the creation and production of the movie. They described a process that begins with prayer and then moves on to discerning a theme for the film. They also discussed how during the production of the movie they have a time of prayer every day and have pastors share devotionals with the cast and crew daily.

The movie was filmed in Columbus, Ga., and nearly 80 churches, across racial and denominational lines, helped support the film in some manner, Stephen said.

LifeWay Christian Resources is producing 11 different resources to help churches engage the movie’s content as part of their ministry efforts.

“How many times have you watched a movie that made you laugh or cry and the next day, you didn’t care anymore?” Stephen asked. “It’s very important to us that when the credits roll on a film and people are very interested and hungry to study fatherhood or prayer or whatever else — that they dive into God’s Word to see what He says about it.

“All of these resources are based on Ephesians,” he said. “That’s the undergirding foundation. We walk through what does Ephesians teach us about our identity in Christ, who we are in Him, who we were apart from Him and how we can live that out on a daily basis. That is our heart. The Great Commission is our heart.”