Anthony Jordan, executive director-treasurer of the Baptist General Convention of Oklahoma (BGCO), gave his final address to the BGCO Board of Directors, as Board members met Feb. 6 at the Baptist Building. 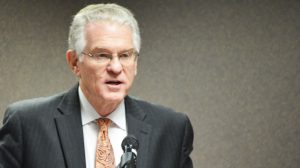 Anthony Jordan address the Baptist General Convention of Oklahoma Board for his final time as executive director-treasurer.

“What do you say in your last address to the board, and what do you say after 22 years?” Jordan asked. “That’s almost a fifth of the history of Oklahoma Baptists. That’s pretty amazing.

“First is ‘Thank you.’ I’ve come to conclude, after all these years that, sometimes, simplicity is the best. I can tell you the gratitude that I feel in my heart for Oklahoma Baptists and for this board, in the privilege of working with you, it is beyond description for me.

“I could never have dreamed as a little boy in Skiatook that one day I would have this great privilege.

“I would tell you this, in all of this, the One who deserves the most thanks, even above my Oklahoma Baptist family, is my Lord Jesus,” Jordan continued. “What an honor to serve Him. That He would allow me the privilege of leading such a great people as Oklahoma Baptists is beyond description. That He would allow me the privilege of standing in the pulpits of hundreds of our churches across the years and to proclaim His Word, that is as good as it gets.”

Jordan shared his appreciation and gratitude to work with many state leaders, as well as many BGCO staff members, over his years of service. He finished his address singling out three aspects that have been “woven” through his years of leadership, and he said he hopes the three characteristics will never go away as focal points of Oklahoma Baptists.

He first mentioned that Oklahoma Baptists are to be a people who take the Gospel of Jesus Christ “from the front door of the church to the ends of the earth. That our passion is to be involved in helping people come to know our Savior. We have no greater challenge, no greater ministry, no greater work to be done.”

“We are a convention of churches,” he said. “If this state is ever to be won to Christ, it is the church that will do it. Falls Creek cannot. CrossTimbers cannot. All the efforts that we put out from this building will utterly fail because the bottom line of it all is we exist in order to help the churches, and the churches are given the responsibility for winning this state, this nation and this world to Jesus Christ.”

The second aspect Jordan mentioned was for Oklahoma Baptists to continue giving faithfully through the Cooperative Program.

Jordan said he tells every church where he preaches that they are “on the other side of the world preaching the Gospel” because their church gives to the Cooperative Program.

The final point of emphasis Jordan made regarding his leading Oklahoma Baptists is on the commitment of valuing the sanctity of human life. Jordan mentioned both his children were adopted and were “robbed from the abortion mill.”

“I have the privilege of having children because others cared enough to provide life for them,” he said. “I have said on numerous occasions, and I want to be in this concluding hour with you, I hope when they ‘close the lid,’ I will still be yelling ‘Save the babies.’”

Board members offered Jordan a standing ovation when he concluded his address.

/// BGCO Board votes not to move forward on Tulakogee camp acquisition 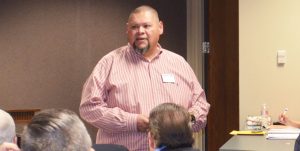 Mike Keahbone, BGCO first vice president and pastor of Oklahoma City, Cherokee Hills, offers a passage of Scripture and prayer at the beginning of the Feb. 6 Board meeting.

In November 2017, news was shared that the BGCO board of directors were pursuing the acquisition of the Tulakogee Camp and Conference Center in Wagoner from the Tulakogee Board of Directors. After a thorough due diligence process, which included an environmental analysis and legal review of the lease agreement with the U.S. Army Corps of Engineers, an update was given to board members at this meeting.

Board members were told about significant barriers to moving forward with the acquisition that came about during due diligence, including an insurmountable issue that was found relating to the land lease. Despite attempts with the Corps of Engineers to amend the lease to include language that would protect the BGCO religious freedom in use of the camp, no changes were made.

Board members agreed with the Executive Committee recommendation and voted not to move forward with the acquisition.  Jordan, who said he and the committee were disappointed that the Tulakogee acquisition was unable to happen, explained this process has created a fresh awareness of the opportunity for camp ministry in northeastern Oklahoma.

Jordan further noted that he regretted it would not be at Tulakogee, and the BGCO will continue to seek a presence in northeastern Oklahoma.  Jordan also said CrossTimbers Children’s Mission Adventure Camp near Davis has outgrown the number of campers it can receive each summer, so the intention would be to find a location in northeastern Oklahoma to support CrossTimbers.

Oklahoma Baptist University President David Whitlock announced Ford Hall has been completely renovated and is now open. He said there is an excitement among students and faculty

who are able to use the well-known music hall. Whitlock said Ford Hall, which was originally built in 1952, is “drop-dead gorgeous” after the renovations and all of the pianos in the hall are Steinway pianos.

Greg McNeece, president of Oklahoma Baptist Homes for Children (OBHC), said OBHC has a “new focus,” by saying OBHC wants to be a part of what the local church is doing. Emphasizing his church ministry background, McNeece said OBHC is embracing a new philosophy of focusing on how to impact the local church to do what God has called it to do.

“I believe God is calling (OBHC) to be a part of what the church is doing. We are not separate. We are a part of,” McNeece said. “So we want to embrace that and do what God has called us to do.”

Robert Kellogg, president of The Baptist Foundation of Oklahoma (BFO), said 2017 was one of the best years BFO has had in its history. “Assets intended to expand Kingdom impact in ministries increased from $59 million to $442.7 million,” Kellogg said, sharing that BFO has distributed $106.07 million to ministries in the past five years.

Bill Pierce, president of Baptist Village Communities (BVC), shared how blessed BVC is for obtaining three new villages last year in Cordell, Grove and Miami from Baptist Healthcare of Oklahoma. “We have been talking to them for a lot of years about these three villages, and God brought it about.” Pierce emphasized how BVC has been working to get more presence in western Oklahoma. Now BVC has villages and services in Cordell, Elk City and Lawton. Overall, BVC is working in 13 Oklahoma cities, Pierce reported.

Rusty McMullen, chairman of the Mobilization Committee and pastor of Sayre, First, reported many new churches are having an impact in their communities. He mentioned Emmitt McKenzie who started a church plant in Watonga and baptized 14 Native American men and women in January. McMullen also highlighted the BGCO Church Planting network has planted 13 new churches in the past year.

Scott Watkins, pastor of Kingfisher, First, was elected to complete an unfilled three-year unexpired term on the OBU Board.

Ray Foreman, member of Tulsa, South Tulsa was elected to complete a one-year unexpired term for on The BFO Board.

The BGCO Board also approved the BGCO to endorse chaplains trained through the Oklahoma Baptist Chaplaincy program.

The BGCO Board will meet again May 22 at the Baptist Building. 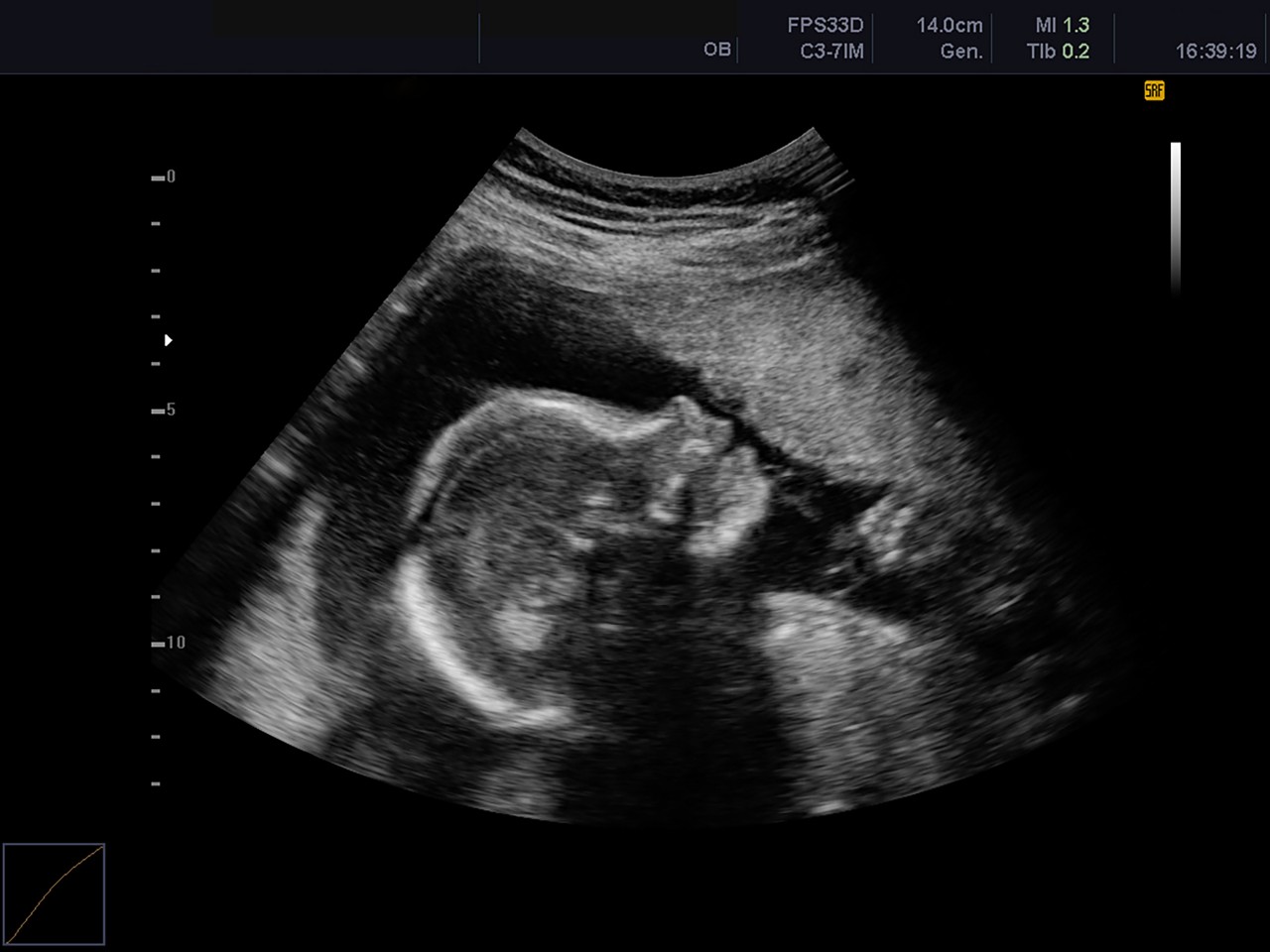 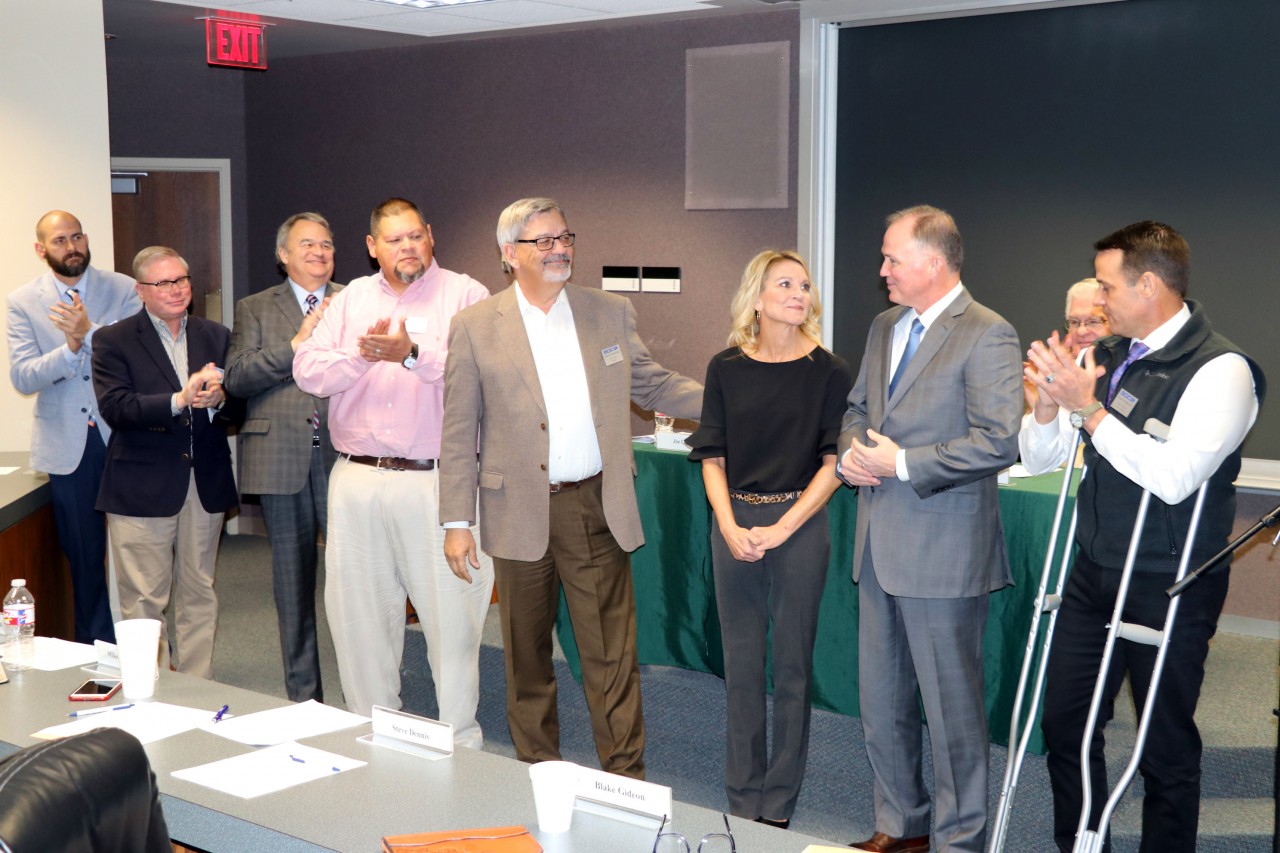 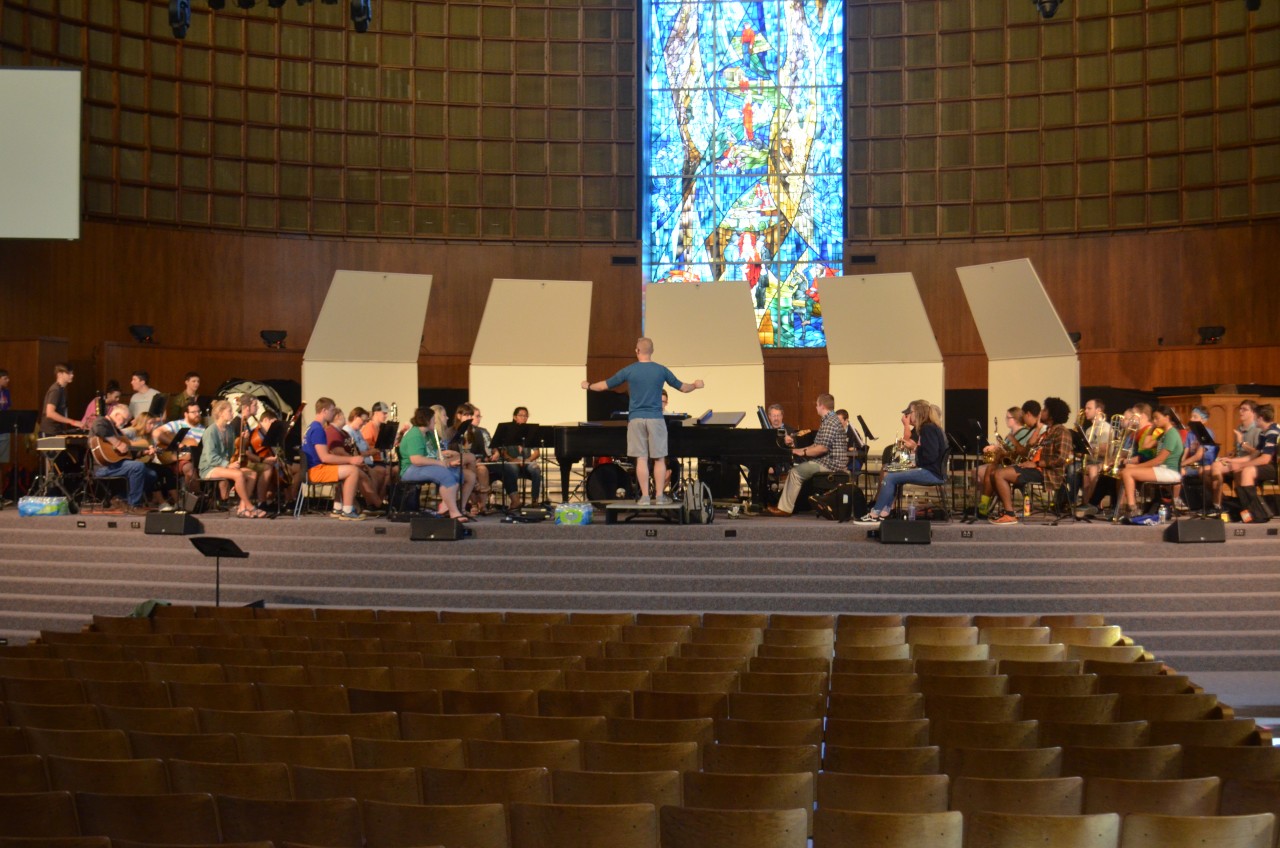 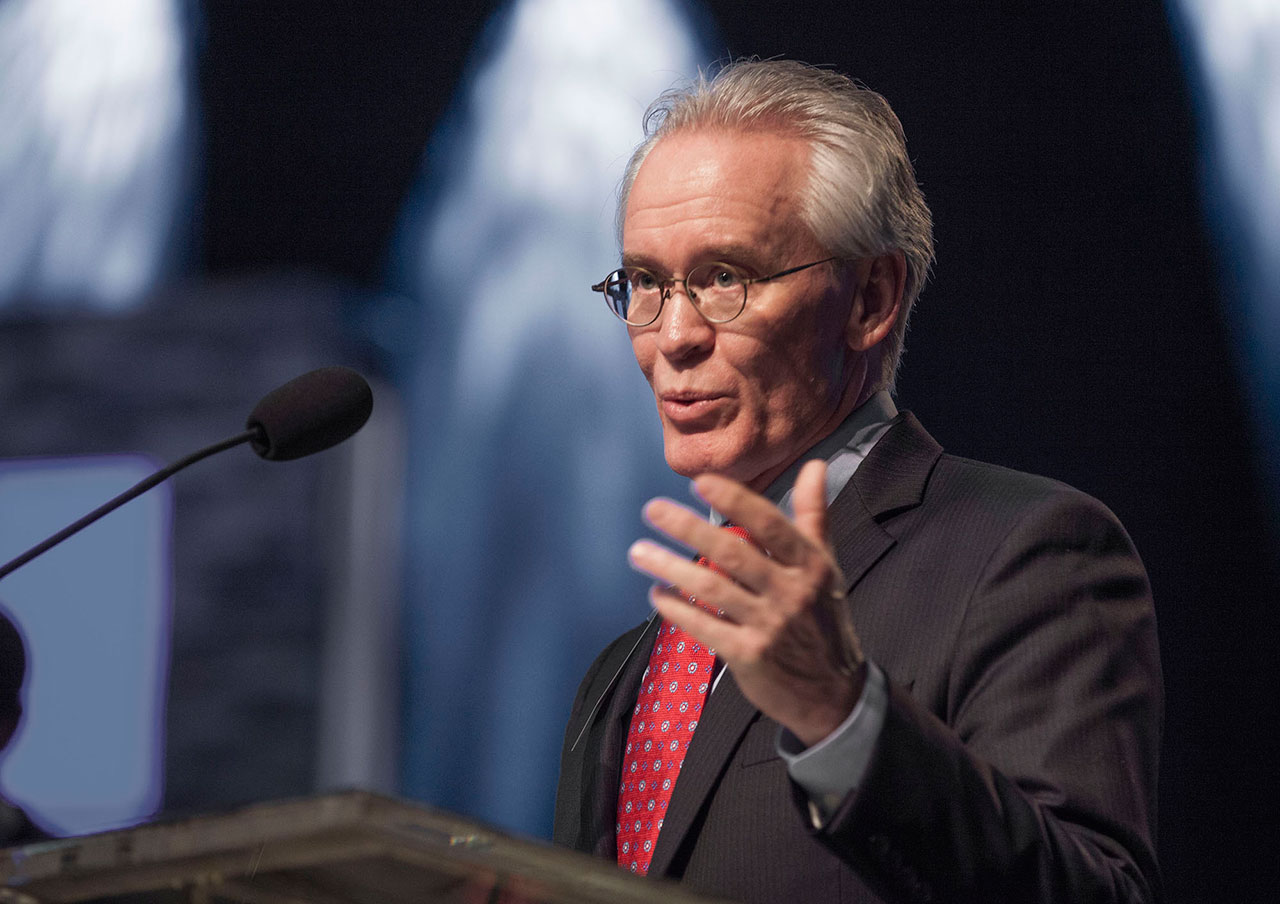