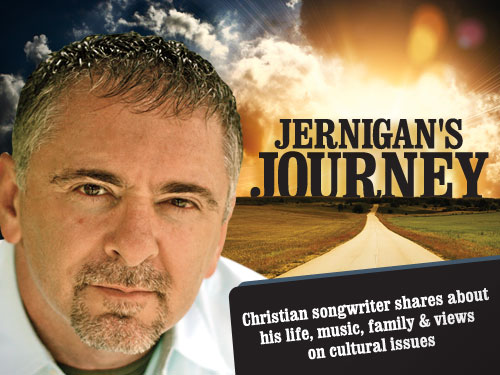 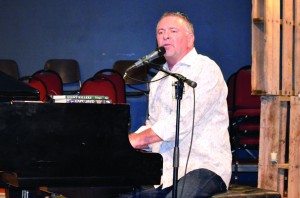 He has been called a “hater.” Dennis Jernigan knows his story is not popular among the current society, but the change he experienced is one he cannot keep hidden, especially because he knows his story involves what people really want. According to him, it can be summed up in one word—Freedom.

“I tried living my own life. I even tried rescuing myself, but in my own schemes I never got free,” Jernigan said. “I went on this incredible journey, and in the process I discovered freedom.

Many do not recognize him immediately, but Jernigan’s songs are sung in churches around the world. You are My All in All, Great is the Lord Almighty, Who Can Satisfy My Soul (There is a Fountain), Nobody Fills My Heart Like Jesus are some of his songs that have been a part of many worship services since the early 90s, and these songs reflect the freedom from spiritual captivity that he said he experienced.

“For over 30 years I have been walking toward Jesus, relationally, saying ‘Father show me who you say I am,’” he said. “’Show me the things I thought defined me but really don’t, that really defined me in my place in death. Help me rid myself of those things.’”

Jernigan struggled growing up in Boynton, where he was the church pianist at Boynton, First, beginning at nine years old. Admittedly, he said he struggled with same-sex attraction. He lived in two worlds, not knowing there was hope for a homosexual, while trying to please everybody in his life. “I equated my good performance with how much people were going to love me,” he said.

While attending Oklahoma Baptist University, Jernigan was betrayed by a friendship and considered suicide. He concluded, though, that “this is just the way I was born. I am going to stop fighting it.” He decided to embrace his homosexuality in a secret lifestyle. After awhile, he said he became more miserable and felt like he was being used.

When he was about to attend seminary, Jernigan got a call from a fellow OBU alum, who offered him a place to live and shared that God had impressed on him that Jernigan would have an influential role as a Christian songwriter. Surprised at his friend’s offer, Jernigan accepted and stayed in the Oklahoma City area. This gave him opportunity to attend a 1981 concert in Norman which proved to be a watershed moment in his life. 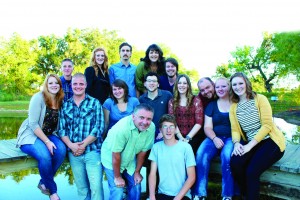 Dennis, front left, and Melinda, back center in green, and their happy family.

Contemporary Christian group Second Chapter of Acts was performing. Jernigan said he was so excited to hear them, and since he did not have the money to buy any of their music, he smuggled in a tape recorder and three blank tapes to record, as he says, “a three album set.” Though he admits it was bootlegging and illegal, Jernigan said “God had mercy on me that night because I got to record my own deliverance.”

In the middle of the concert, Anne Herring, lead singer of Second Chapter of Acts, stopped to share an impactful message that spoke to Jernigan personally. He recalls what she said, “The Holy Spirit has told me (Herring) there is somebody here tonight. You have gone through things you never thought you would have gone through in your life. You have things hidden in your heart that you never want anyone to know about because you would be devastated, rejected and humiliated. But God wants me to tell you this. He sees the hidden things, and He loves you right where you are.”

On Nov. 7, 1981, Dennis Jernigan was delivered from homosexuality. He embraced the message of God loving him even when he was living the homosexual lifestyle. From then on, Jernigan took on a new life in Christ.

“That night, my worldview changed,” he said. “I had thought man was the ultimate, up until that moment, and then I realized God is my Maker. I wanted to find out what He says about me.

“The most asked question in my life is, ‘Was your healing instant or has it been a process?’ And the answer is ‘Yes.’ In an instant I was made a brand new creation. The process looks like Lazarus coming forth.” Just as Lazarus was raised from the dead, Jernigan shared, he had to remove the “grave clothes” that symbolized his old life in order for his new life to be fully embraced.

///Results of the journey

Jernigan recently celebrated his 30th wedding anniversary with his wife, Melinda. They have nine children, and he wittingly shares “No, we are not Mormon or Catholic, and the children are not adopted, and yes, we know what causes that.” In August, he became a grandfather for the first time.

The accomplished Christian artist currently works through his ministry, Shepherd’s Heart Music. He has produced multiple albums and is releasing a new one this Fall called “Days of Awe.” Jernigan said the one word he would use to describe this recording would be “epic,” as the songs should reflect a Hollywood movie soundtrack.

“What if (film composers) Hans Zimmer or James Horner wrote a worship song, what would it sound like?” Jernigan asked. A young man who Jernigan mentored since he was 18 and is now 28 helped produce “Days of Awe,” and Jernigan gave him this instruction, “I want you to produce it in such a way that will attract your generation but will not scare away my generation. I want it to be epic and timeless.”

Jernigan also has several new books including the third and final installment of his fantasy series Chronicles of Bren. He said the series tells the story of a boy who grew up in Northeastern Oklahoma who is mocked and bullied and falls into another realm where he finds out he is the son of a King.

“Bren is a word that means ‘tears.’ In a sense, it is the chronicles of my own tears and sufferings and sorrows and pain but told in a fantastic, supernatural way that kids would understand,” he said. “It is done much in the vein of Chronicles of Narnia and The Lord of the Rings. It is written in such a way that children will see that they do have an identity and a purpose for their existence.”

Along with books and music recordings, a documentary film will be released soon titled “Sing Over Me: The Dennis Jernigan Story.” And his full autobiography of the same title also will be available in the coming months. The latest information on the film can be found at singovermemovie.com.

More information about Jernigan’s ministry can be found at DennisJernigan.com. His website features subjects that include how to respond to Pro-Gay theology, how to become Born Again and how to minister to those with same-sex attraction. He encourages the Church not to lose heart.

Though his story is deemed controversial, Jernigan will continue to help those who seek freedom. He said in today’s world he will face increased opposition.

“I will never be silent, even if they come up with legislation that tells me my story is illegal, which there is that push,” he said. “But then I’ll be willing to have a prison ministry from the inside, just like Paul did.”

And so goes his journey.