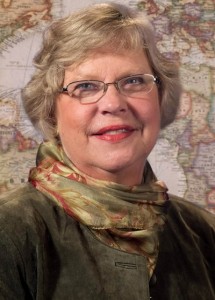 Jeannie Elliff, wife of former IMB President Tom Elliff, died July 20 at her home in Oklahoma City following a long struggle with cancer. She was 69.

“The entire IMB family and I praise God for Jeannie Elliff,” said IMB President David Platt. “To use Paul’s words from 2 Corinthians 6:10, we are filled with sorrowful rejoicing at the news of her passing. We grieve with Tom, the Elliff family, and countless friends who have known and loved this woman of prayer and model of faith.”

Elliff, who had fought two previous bouts with cancer, was diagnosed a third time in summer 2014, a few months after her husband asked IMB trustees to begin the search for his successor.

“For many years, she has served and cared for IMB personnel around the world in selfless and unseen ways, and we will miss her deeply,” Platt said. “Yet we grieve with hope, for the joy of Christ in Jeannie Elliff could not be overcome by cancer, and it has not been overcome by death. We rejoice that she is with our Lord, and we look forward to the day when we will join her around the throne of our King with every nation, tribe and tongue to give Him the ultimate glory that He is due.”

“Heaven is a richer place today, and I immediately called out Job 1:21, ‘blessed be the name of the Lord’ when I heard of her passing,” he said. “Our prayers are with Tom and his precious family.”

Anthony L. Jordan, executive director-treasurer of the Baptist General Convention of Oklahoma, on the morning of July 21 said on Twitter, “Tom & Jeannie Elliff are a Treasure to OK Baptists. I call on all OK Baptists in praying for Tom and his family in the home going of Jeannie.”

The ultimate glory of God among the nations was the basis on which Elliff staked her life and ministry. In 2014 she was awarded the Willie Turner Dawson award at the Ministers’ Wives Luncheon during the Southern Baptist Convention’s annual meeting. The award is given to women who have made a distinct denominational contribution that extends beyond the local church.

“I accept this on behalf of the 2,578 IMB women who serve in hard places around the world,” she said at the time.

Many of the IMB women Elliff referenced particularly appreciated her prayer ministry. From personal experience, Elliff understood how to pray specifically and passionately for the needs of those ministering in hard places. She served as a missionary in Zimbabwe in the early 1980s and sent two children and their families overseas as missionaries. At one time, 11 of her 25 grandchildren lived overseas.

Sarah Mycks*, who serves in Southeast Asia, appreciated Elliff’s prayers in the years following the death of Mycks’ husband.

“I found in the last few years that she has specifically prayed for me and my family many times,” Mycks said. “I know that in those times, despite I had no idea it was happening, God heard her prayers and blessed us in her faithfulness. She was such a blessing to me and to so many others.”

Elliff’s passion for prayer was fueled in part by the difficult circumstances she faced in her own life, including a 1982 automobile accident in Zimbabwe that nearly took the life of her daughter Beth and brought the family back to the United States.

She never forgot what God taught her that awful day in Zimbabwe.

The lesson she learned as she relinquished control of her children in Zimbabwe led Elliff to desperately seek — for herself and others — the One who is in ultimate control. An entire wall of the Elliffs’ walk-in bedroom closet was covered with the photos and prayer cards of IMB missionaries. When things got hectic, she often went into the closet to pray. Her primary prayer for missionaries was based on John 17:3 and Daniel 11:32: That they would seek to know God first, and do great things as a result.

The impact of Elliff’s prayer ministry was never more evident than the hours following her death. Condolences and remembrances from friends around the world peppered her Facebook page and personal blogs across the Internet.

Missionary Vicki Lassiter, who serves in Lima, Peru, wrote on Elliff’s Facebook page, “Want to learn how to live well and die well? Thank you, Jeannie Elliff. Praying comfort and sweet memories for your family.”

Deb Mills, who previously lived in the Middle East, wrote on her blog, “[Elliff’s] prayers were her greatest gift to all of us. She prayed with an earnestness born out of a deep personal faith in God. She knew Him and knew what He could do in our lives. He called her to prayer, and she met Him there … for all of us.”

“Jeannie was a blessing to everyone who knew her,” said Clyde Meador, IMB executive adviser to the president. “Her absolute commitment to and dependence on the Lord was always evident by the joy she shared with all she encountered. Her passion was to share the love of Jesus — from her family and her neighbor to the ends of the earth. From the first time I met her even until now, her faith and joy never wavered.”

Elliff is survived by Tom, her husband of 49 years; three daughters; one son and 25 grandchildren.