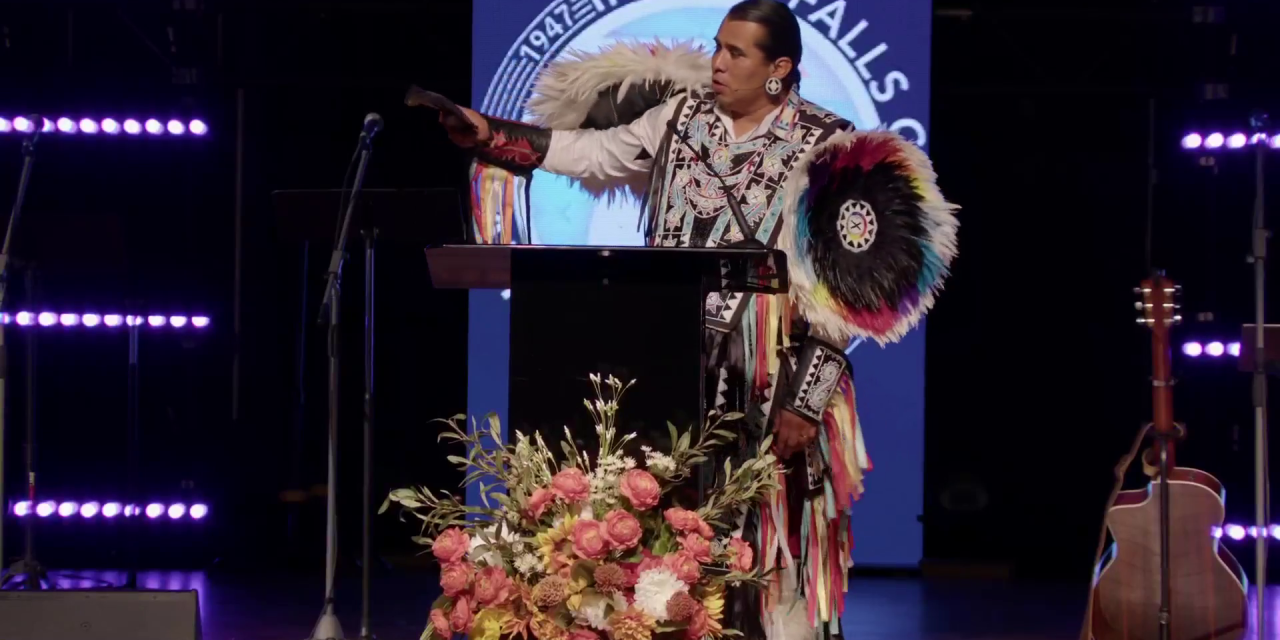 DAVIS—The 2022 Indian Falls Creek (IFC) celebrated the 75th anniversary of the ministry July 31-Aug. 4 with prayer, worship and preaching, with dignitaries from the Southern Baptist Convention (SBC) and Oklahoma Baptists in attendance. More than 2,100 Native Americans from tribes across North America assembled at the family camp that was founded in 1947. 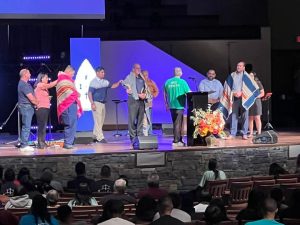 Jennifer Barnett, Ron Neal, Emerson Falls and Victor Cope moderated the worship services. Other highlights include a Veterans Recognition Ceremony, Pastors’ Wives Fellowship, and baptism services at the creek. The camp also featured a historical display of photos and included times of sharing memories from more than seven decades of the camp history.

Evening worship singing was led by worship band 1Nation, and preaching was led by camp pastor Jay Mule, who is pastor of Geary, Chief Cornerstone and director of missions in Cheyenne Arapaho Association.

This year’s IFC also featured another historical event. A sitting SBC President visited the camp for the first time. Bart Barber, who was elected as president by Southern Baptists at the SBC Annual meeting in Anaheim, Calif., in June, participated in the camp on Monday, Aug. 1.

After touring the Falls Creek campgrounds and meeting with pastors, Barber spoke in the evening assembly. “I am happy to be here to celebrate this anniversary with you today,” he told the crowd. “We love the churches of Indian Falls Creek. They are an important part of the Southern Baptist Convention.”

Barber addressed a resolution that was adopted by SBC messengers in June. Known as Resolution 4 and titled “On Religious Liberty, Forced Conversion and the Federal Indian Boarding School Initiative Investigative Report,” the resolution formerly decried the forced assimilation and conversion of Native peoples.

Barber stated that religious liberty has a long history among Baptists. Recalling the ministry of Roger Williams, a Baptist pioneer who founded the First Baptist Church of Rhode Island, Barber said Rogers believed Native peoples “deserved to have the opportunity to hear the Gospel, to decide whether they believed the Gospel, and to make their own choice without repercussion from men as to whether they would or would not follow the Gospel.”

“I am so thankful for Mike Keahbone,” Barber said. “He is recognized as a leader among Southern Baptists from coast to coast.”

Keahbone spoke about the resolution during the evening assembly, and he mentioned his own family’s experience, remembering a great uncle who was a victim of the abusive practices of forced assimilation.

Keahbone read aloud the 475-word resolution that encourages Southern Baptists to resolve to “stand against forced conversions and distorted missiological practices as contrary to our distinctive beliefs as Baptists in religious liberty and soul-freedom (The Baptist Faith & Message, Article XVII).”

The reading of the resolution was met with thunderous applause from those in attendance.

“We are not going to stand for it anymore,” he said of Native peoples being forced to assimilate against their wills.  “I am so proud that (at the SBC annual meeting) we took a stand as a convention (of Southern Baptists), as a state convention and all of (Native believers).”

Cope also spoke about the need for contextualized Gospel witness among native peoples in North America. He then led a blanketing ceremony, where honorees were wrapped in blankets with traditional native patterns woven in and prayed for by the IFC assembly, honoring Keahbone, Barber and Todd Fisher, executive director-treasurer for Oklahoma Baptists.