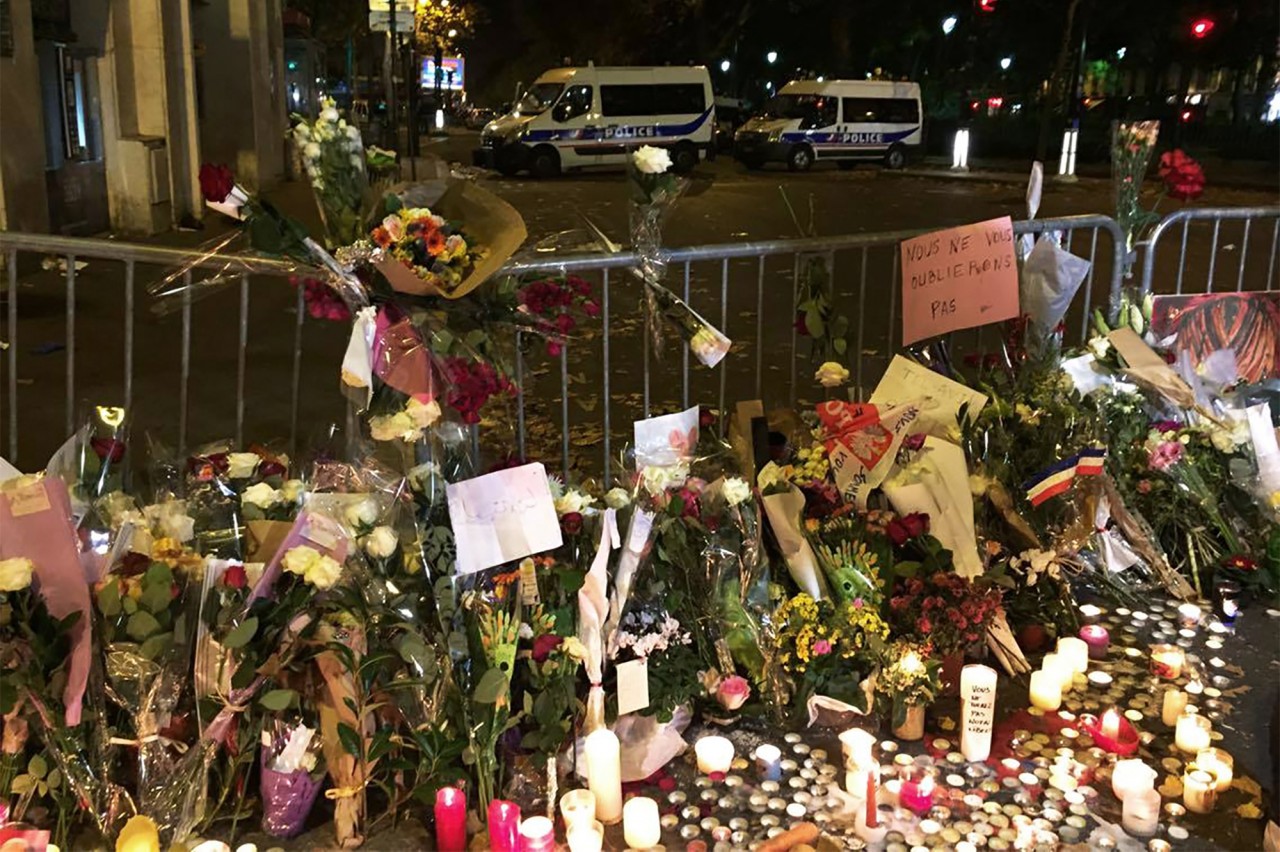 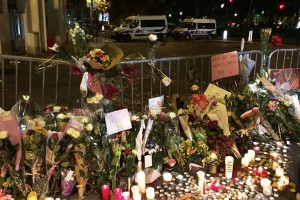 Flowers, candles and notes fill the streets as people begin to mourn the loss of those killed in terrorist attacks that left hundreds dead or wounded. (Photo: Adrianna Ramirez, IMB)

PARIS (BP) — Friday the 13th became a day of infamy in Paris after a series of coordinated terrorist attacks in Paris left at least 129 people dead and 350 wounded.

“This has been the worst attack in Paris since World War II,” said Tara Chaney*, an International Mission Board worker in France. “People are in a state of shock and mourning; however, there is also a sense of resolve. Parisians are slowly going about their lives. They want to prove to the terrorists that they have not won.”

IMB officials reported all of their personnel in Paris are safe, although four were at the national stadium that was one of six locations targeted by terrorists.

The self-proclaimed Islamic State claimed responsibility, yet many Muslims around the world took to social media to condemn the attacks, citing a difference between Islam and extremist dogma.

Mark Edworthy, IMB’s top strategist for Europe, said, “Some rush immediately to political or even ideological reasons behind the acts, but our workers understand the spiritual dimension of darkness in the world and the reality that violence can erupt anywhere and any time.”

Edworthy added that some would think the immediate response is that Paris needs to monitor more closely the whereabouts of known terrorists or some other “empty solution” to a very complicated problem. “But our workers have one driving thought: ‘Paris needs Jesus,'” Edworthy said.

“There are so many hurting people in our city,” said Rebecca Edwards*, a Christian worker in Paris. “Aside from those who have been personally affected by the loss of loved ones or the terror of being directly involved in the attacks, there are millions of people living in this city who do not have the hope that comes with knowing of the love of Jesus Christ.”

Friday night’s carnage included three separate explosions near the national stadium, where an international soccer match was being held. The deadliest onslaught, however, was at the Bataclan concert hall, where attackers took hostages and engaged in a standoff with police until nearly 1 a.m. Saturday.

Michael Harrington, a Baptist worker in France, said, “These were not shootings in dark neighborhoods, not government targets, not military quarrels. Rather, the shootings and bombings today happened in the places of Paris in which life occurs every day: cafés, restaurants, the stadium, a concert hall. The purpose was clear: death, pain and terror.

“Are the French people hurting? Without a doubt,” Harrington said. “Many will find their loved ones home and safe, but there are over 300 people that are not home, nor safe. Our hearts hurt. Our colleagues in the French Baptist Federation expressed solidarity in the face of hurt, pleading adherence to 1 Timothy 2:1-8, which calls for petitions, prayers and intercession.”

The federation’s website posted a response to Friday’s Paris attacks, saying, “Again this year, our country has now experienced the horror of terrorism: dark, cold, blind and blinded. France, where a state of emergency has been declared, wakes up in pain, grief and bereavement. Beyond outrage, sadness and incomprehension, the Baptist Federation shares compassion for the victims and families affected by these murderous attacks. It encourages all to mobilize our churches to actions of help and support in prayer. The Bible invites us to establish a footprint of prayer in truth and love, commitment and authenticity.”

In January this year two gunmen stormed the Paris office of the publication Charlie Hebdo, killing 11.

Arkansas pastor Ronnie Floyd, president of the Southern Baptist Convention, said, “Our hearts are broken with the people of France over the tragedies in their nation. We are praying for them now and trust that thousands of our churches will pray in their worship services on Sunday interceding for them. This evil calls us to resolve again of our great need to advance the Gospel to all peoples of the world.”

Frank S. Page, president of the SBC’s Executive Committee, said, “Yet again, my heart is broken for the people of France and truly for all people of civilized culture to hear of the barbaric and cowardly attack on the innocent civilians in Paris. It truly makes no sense and only deepens the divide. We pray for the families of those affected. God bless France!”

Trey Cassidy*, an IMB strategy leader in France, said, “We mourn with our French brothers and sisters that many did not come home after the attacks. It brings to mind the verse in John that our enemy is a thief who ‘comes to steal, kill, and destroy.'” He encouraged the Christian community to not wait and see how others will respond to this tragedy. “Let us, as the body of Christ, be the first to respond with comfort for those grieving and an offer to share our hope,” he said.

“Please pray for the people of Paris, France and Europe in the coming days,” said Wendy Meador, IMB’s prayer strategist for Europe. “Ask for healing for those injured and comfort for those who have lost loved ones. Intercede for wisdom for those in authority as well as for citizens, as they react and respond to this situation. Petition our loving Father to fill grieving, questioning hearts with peace that only He can give. Pray for field workers as well as local believers as they reach out to the hurting and pray that many will place their faith in Him, as they seek hope after this crisis.”

For prayer resources for France, go to imb.org/france.

Charles Braddix is a writer for IMB based in London.

View all posts by Charles Braddix