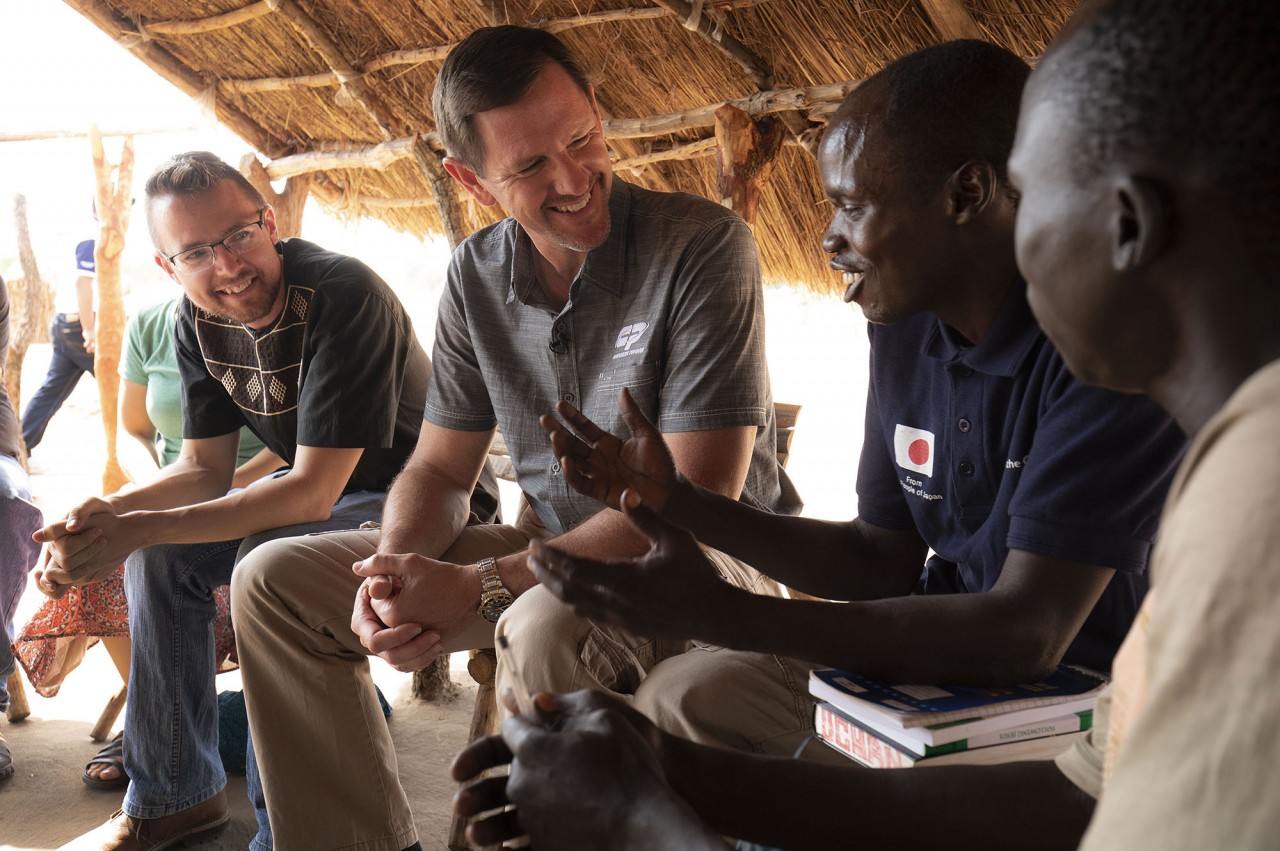 ARUA, UGANDA (BP) — With only one arm, Agnes carries a five-gallon jug on her head in a refugee camp near the South Sudan border in northern Uganda. On her own, she’s a single mom with two children to care for and has to make the hour-long trek because it’s the closest well to her house.

As she nears her house, Agnes sees guests waiting for her. Among them is Paul Chitwood, the International Mission Board’s new president and his wife Michelle; their 12-year-old daughter Cai is nearby playing with missionary kids and village children. The Chitwoods heard about Agnes and wanted to meet her and see her new home, which was built through efforts by IMB and their partner organization Baptist Global Response (BGR). 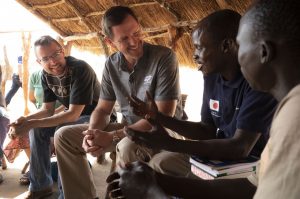 IMB President Paul Chitwood (center) sits with missionary Kevin Singerman and Geofrey Ochan of Hope Baptist Church in Arua, Uganda. Chitwood visited the refugee camp as part of his visit around Uganda to see the ministry firsthand, as well as encourage IMB missionaries and meet with national partners. Photo by Chris Carter/IMB

“… To see the joy in her face,” Chitwood reflected on his visit with Agnes. “Those are memories that I won’t lose.”

Agnes is among 1.5 million refugees in Uganda, and 85 percent of them are women and children under the age of 18, according to IMB stats. IMB missionaries are responding to the crisis, meeting both physical and spiritual needs — among them is building wells in refugee camps to help those like Agnes.

In addition to building houses and wells, missionaries are providing trauma healing for refugees forced to leave their homes, as well as evangelism efforts, offering theological training and helping with church planting efforts in the refugee camps.

Providing physical relief is just one part of IMB’s work among the refugees, but Chitwood said it is an important part.

“The Lord modeled for us to not only embody the Word, preach the Word … but He also modeled the healing ministry, meeting those who were hurting and struggling and touching them in very practical ways.”

The trip to Uganda this week (March 31-April 6) is Chitwood’s first extended trip overseas in his new role. During the week long trip, Chitwood is meeting with missionaries in the country to see their efforts among refugees as well as other ministry work in urban areas in the country.

The refugee ministry team based out of Aura makes the two-hour drive from the city several times a week along unforgiving dirt roads that can be a challenge to navigate. On the day of Chitwood’s visit to a refugee camp, the brakes on one of the missionary vehicles locked up leaving one missionary family temporarily stuck in the road until help from another missionary arrived. 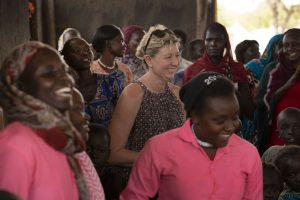 Michelle Chitwood participates in praise and worship at Ocea Baptist Church in Rhino Camp, one of the many refugee camps in northern Uganda near the South Sudan border. Photo by Chris Carter/IMB

The team of missionaries and Journeymen workers involved in refugee ministry is led by missionary Jeremy Taliaferro, who moved from the northeast corner of Uganda to Aura with his wife Susan and family a couple years ago. Soon after arriving in the city, the couple helped start Borderlands Co-op, a hub for his team as well as other Christian humanitarian workers and secular NGO workers. The facility, funded through gifts from IMB’s partner organization BGR, provides a place for them and other humanitarian groups that work with refugees to collaborate, utilizing each other’s strengths and resources to confront the crisis.

“The biggest part of my vision is to see the people of God come under that banner to meet the physical and spiritual needs of refugees that are here … to gather together as one team under the name of Jesus Christ,” Taliaferro said.

Taliaferro also sees the co-op as a way to build relationships with secular humanitarian groups that may be skeptical toward Southern Baptists. He shared about one worker who went from being confrontational to asking for recommendations for churches to visit.

“It’s opened doors for us in the camps because now they don’t shy away from working with us because we’ve built those relationships,” he said.

Among refugees, Southern Baptists also are making progress in providing trauma healing, which helps refugees recover from the psychological pain they have experienced.

Chitwood noted the importance of the ministry among people who have endured “unspeakable horrors and trauma in their lives.”

“They found a way through the Gospel through biblical counseling to move beyond the pain of their past to look to a future with hope,” Chitwood said. “Through this trauma healing ministry, they’re able by the power of God’s Spirit in them and the truth of God’s Word … to find joy in their lives again and the ability to forgive those who have committed atrocities against them…. I can’t think of a more powerful testimony of the truth of the Gospel.”

Sanah, a local church deacon and refugee from South Sudan, said the counseling helped him find forgiveness in his heart against those responsible for the pain he and loved ones endured.

“I always thought I had to go back and get revenge,” Sanah said, “but I went through trauma healing … I prayed, ‘Jesus, I’m going to forgive’ … from this day I give my heart to Jesus. When I came from trauma healing, I came with a new heart. I’ve learned how to forgive and I learned the process of grieving. My heart is now clean and I don’t want to hurt anyone.”

Daren Davis, an IMB leader over mission work in sub-Saharan Africa, said other local pastors and church leaders who escaped atrocities in their homeland also are impacting Uganda for Christ.

“There is suffering,” he said, “but these people have hope because there is Christ. Their only hope is Christ … and they joined together regardless of tribe. And they meet together as one tribe, children of God.”

For Chitwood, hearing these stories and meeting with missionaries working on the frontlines of the refugee crisis shows Southern Baptists are helping meet both spiritual and physical needs.

“We’re building houses, we’re doing water projects, digging wells, repairing wells, we’re part of food distribution,” Chitwood said. “The ultimate goal is to share the Gospel and see them saved but we also understand that the Lord made it clear to us we’re to help clothe the naked, feed the hungry … minister to the sick, visit the imprisoned.”

In the coming weeks, Chitwood plans to visit missionaries in Colombia.