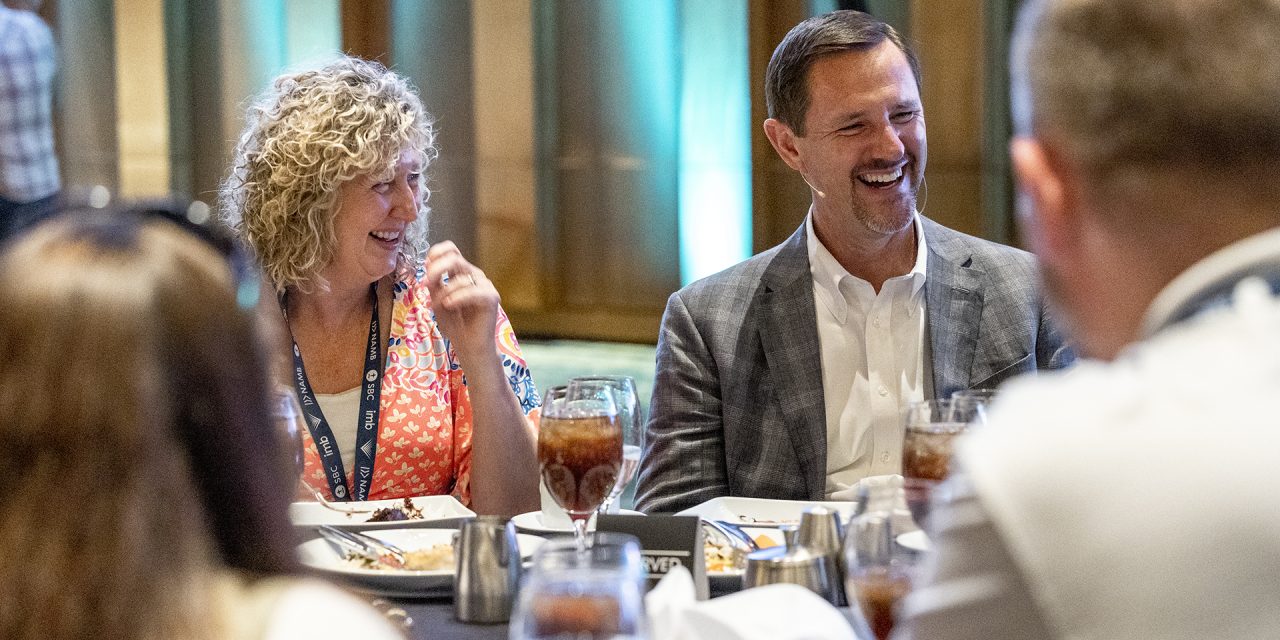 NASHVILLE, Tenn. (BP)—At the International Mission Board (IMB) dinner during the 2021 SBC Annual Meeting, Southern Baptists heard stories from IMB missionaries of God’s faithfulness to reach the nations and encouragement to focus on the Great Commission found in Scripture.

“God is using you, God is using all of us, as we work together toward the Revelation 7:9 vision,” said IMB President Paul Chitwood, who is featured above with his wife Michelle. “Even during a year disrupted by a global pandemic, when a majority of the countries in the world shut down. Even during a year of relentless famine and numerous natural disasters, God is calling the nations to Himself.

“Revelation 7:9 is proof that no person’s voice, no earthly catastrophe, and no scheme of Satan, can ultimately stand in the way of God’s plans.” 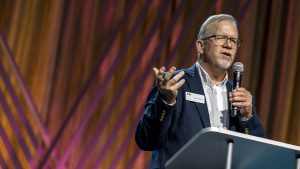 Todd Lafferty, EVP of the IMB, welcomed 1,500 participants to the IMB dinner June 14.

Todd Lafferty, executive vice president for IMB, welcomed the 1,500 Southern Baptists in attendance to the dinner and opened with a prayer. After a video presentation of IMB missionaries thanking Southern Baptists for their generosity to give, Chitwood introduced three missionary couples who shared how they had seen God at work among the nations within the last year.

Mark and Vesta Sauter, IMB missionaries among Deaf peoples, shared a story of a Deaf Thai woman who was led to Christ by Deaf Thai believers who were led to Christ by IMB missionaries to the Deaf. Even though she grew up in a Christian home, this Deaf woman had never understood the Gospel because she had never heard it in her heart language. Once she heard the Gospel in Thai sign language, she finally understood what it meant to be a follow of Christ.

Andy Pettigrew, IMB missionary to Sub-Saharan Africa, celebrated national believers’ eagerness to share the Gospel. In spite of persecution, Africans are on the move Pettigrew, said.

Chitwood encouraged Southern Baptists to focus on the mission given to the Church found throughout Scripture.

“God, in His Word, has made it clear that every one of us is to be about His Great Commission,” he. “Yet, there are so many things that can distract us from His mission. We are living in a time where issue after issue can not only distract us but divide us.”

“We must commit to living as Great Commission Baptists every day, taking full advantage of every opportunity to join in the work God is doing around the world.” 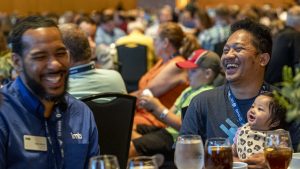 The 1,500 Southern Baptists in attendance at the 2021 IMB dinner enjoyed fellowship around the dinner tables and heard stories of God’s faithfulness from IMB missionaries.

Chitwood challenged attendees to ask God to reveal their role and their church’s role in the Great Commission, whether that be to pray, give, send or go. He asked that everyone start their work on their knees in prayer. When we pray for our missionaries and the unreached people of the world, we play a part in advancing God’s kingdom, said Chitwood.

After thanking Southern Baptists for their faithful generosity to the Cooperative Program and the Lottie Moon Christmas Offering, Chitwood announced IMB’s launch of the monthly, recurring giving program, the Seven Nine Community.

“By setting up a monthly recurring gift of any amount and joining the Seven Nine Community, you empower the Gospel to spread to the ends of the earth 365 days a year,” Chitwood said. “When we give to support IMB missions, we play a part in advancing God’s kingdom.”

Chitwood celebrated the 64 missionaries commissioned in IMB’s Sending Celebration earlier that evening and urged churches to continue to send and go to the nations. He quoted Lottie Moon, “Surely there can be no deeper joy than that of saving souls.”

Attendees received a prayer journal and a choice of products from Kilele Gear and Even Just One, companies who use their profits to support missions. At the IMB exhibit, visitors were gifted bags of Kingdom Growers Coffee, a company who partners with IMB. As guests at the dinner picked out their gifts, Chitwood asked that they remember these companies the next time they give a gift or buy coffee.

Chitwood closed the dinner with a challenge to Southern Baptists.

“Let’s reach every nation, all tribes, peoples and languages together,” he said. “Pray. Give. Go. Send. Because the Lord is coming for those who are His, and there are still 155,473 who, just today, will die without Christ. Please do not forget that number. We hope you’ll join us 365 days a year in reaching the unreached.”

*Names have been changed for security