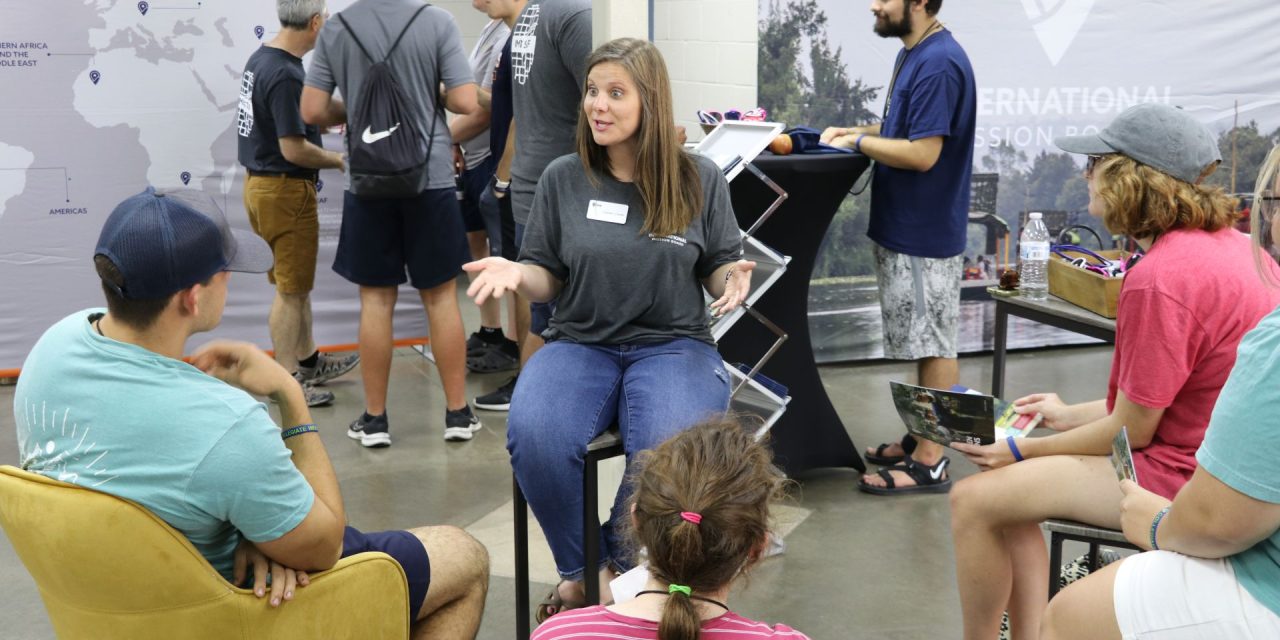 Above: Laekan Carter, IMB mobilization associate for Sub-Saharan Africa meets with college students during an afternoon gathering at Collegiate Week.

DAVIS—The International Mission Board (IMB) looks forward to Collegiate Week. It’s a great time for IMB personnel to connect with college students who are considering going on the mission field. 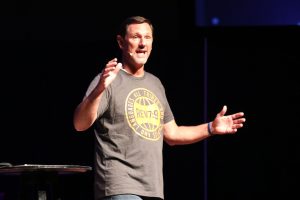 On Aug. 7-11, at Falls Creek Baptist Conference Center, 1,400 college students from 28 states and four Canadian provinces participated in Collegiate Week. This is the fourth year Falls Creek has hosted Collegiate Week, and with IMB in mind, the event feeds the reputation that Oklahoma continues to be a prime setting for recruitment of IMB missionaries.

Oklahoma Baptist University is one of the top universities to produce IMB missionaries. For more than 100 years, Falls Creek has witnessed many young people surrender to missions during the summer youth weeks, and Baptist Collegiate Ministries (BCM) at Oklahoma’s colleges and universities also have their fair share of graduates go on to serve the mission field through IMB.

Now add Collegiate Week to the equation, and that makes Oklahoma an even more valuable commodity for IMB.

“Collegiate Week represents, to me, one of the best mobilization events of the year,” said Charlie Worthy, IMB student mobilization associate for European affinity. “There’s nothing like it. For us as IMB to be here, having exclusive access of (collegiate) leaders, there’s no bigger event. This is the best event as far as connecting with college students.”

IMB representatives spent every afternoon meeting with students and talking about missions—students’ interests, stories from the field, opportunities to serve. And Worthy said they have been successful placing students through the Journeyman two-year program and other opportunities, regardless of the students’ field of study.

“I am seeing more students get to places,” Worthy said. “Next summer we will have collegiate internship opportunities in agriculture, health care, education, technology, sports, orphan care, refugee ministry. The exciting thing is we are having young people come out and utilizing the fields they are studying in. It’s such an exciting thing for me to see them come out and utilize it.”

IMB President Paul Chitwood spoke during the opening celebration at Collegiate Week. He brought a challenge based on what John shared in Rev. 7:9. Chitwood said the vision told in this verse is not yet fulfilled, and “we still have work to do.”

“IMB exists to address the world’s greatest problem, that is lostness,” he said. “We exist to send missionaries from the church to the world to give the Good News of the Gospel to those who have yet to hear.”

IMB will soon reveal a plan that will focus on reaching 3,000 unreached people groups that are located in the most challenging areas for Gospel witness. What makes the areas challenging could be either due to location being difficult to reach through travel or due to strong resistance of Christianity.

Chitwood made this plan known during Collegiate Week because attendees may find the plan appealing.

“(For IMB’s plan) we’re targeting young people at the age of college students up to 30,” Chitwood said in an interview with Baptist Messenger. “They’re more adventuresome and mobile, don’t have children and could go in and out in some of the harder, more remote places. We want to appeal to that adventuresome.”

Chitwood said IMB will officially announce the plan’s details this fall with intentions of sending out a group of missionaries in January.

“Even though things haven’t been advertised yet,” he said, “I couldn’t pass up the opportunity to pitch it out and get some of them thinking about it.” This is why Chitwood and IMB thought Collegiate Week was a good event to appeal to prospects for this plan of reaching 3,000 people groups. And Chitwood is confident these people groups will be reached.

“I am 100 percent certain they will be reached,” he said. “Will it happen in our lifetime? Will we be a part of it? That is the question. How badly do we want to be a part of it? How hard are we willing to work toward it? But I’ve read Rev. 7:9, and they will be reached. I have that assurance. I am hopeful that we could check off hundreds, even thousands in our lifetime, but I know ultimately whether we do it or not, somebody is going to.”

Facts and figures of Collegiate Week

Along with Chitwood, Collegiate Week featured a slate of keynote speakers including Jay Sanders who serves as Baptist campus ministry director at the University of South Florida. Tom Richter, pastor of Cullman, Ala., First, and Shane Pruitt, national Next Gen evangelism director for North American Mission Board, also spoke during the worship services.

The BCM at Southwestern Oklahoma State University had the most attendees of any group at Collegiate Week with 60 representatives.