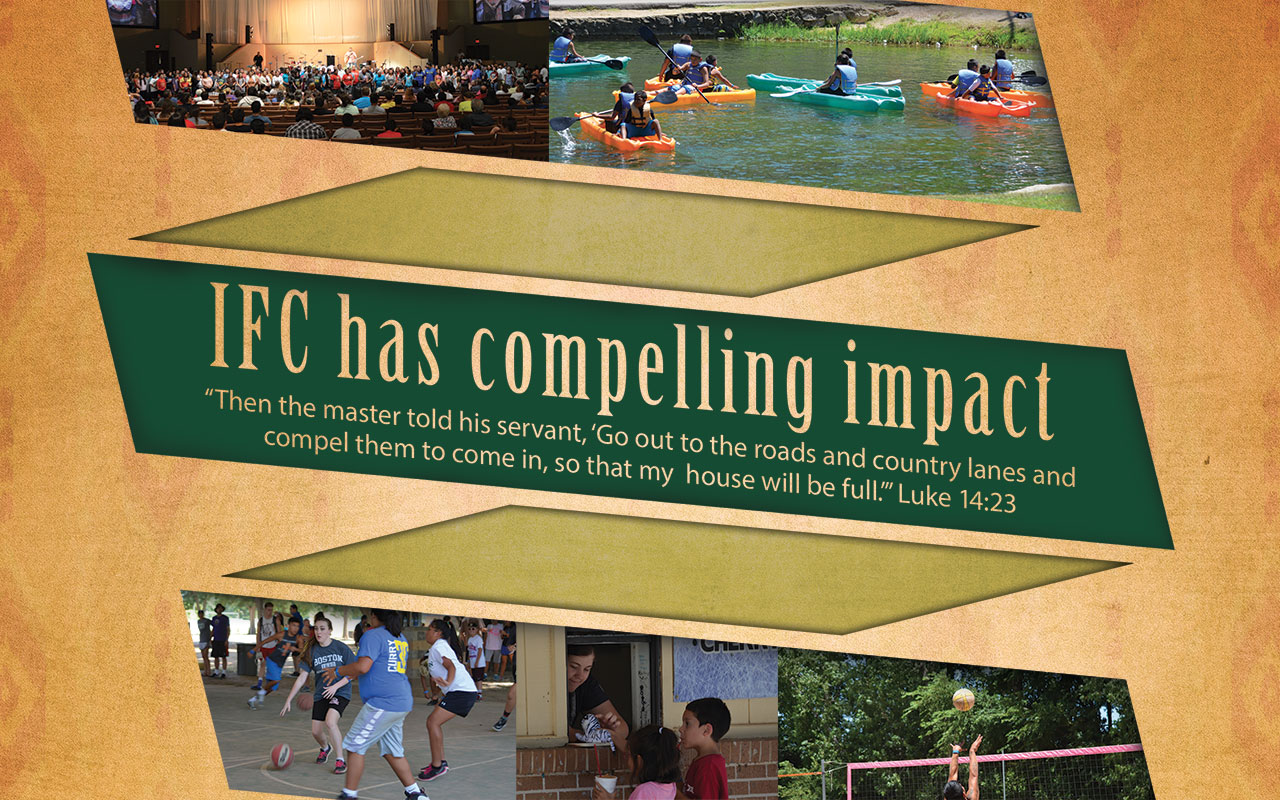 DAVIS—While total attendance was down this year as expected after an all-time record was set last year, Indian Falls Creek (IFC) organizers instituted a new program to help propel the camp to new heights in other ways, July 31-Aug. 4 at Falls Creek Baptist Conference Center.

The theme of IFC this year was “Compel,” based on Luke 14:23, “Then the master told his servant, ‘Go out to the roads and country lanes and compel them to come in, so that my  house will be full.’”

A new outreach/evangelism program, also called “Compel,” conducted prior to and during IFC, was utilized to help bring new faces to camp.

“I was very pleased with our overall numbers,” said IFC Executive Director Victor Cope. “Students in some of the school districts in which our churches are located, such as the largest one in the state—Oklahoma City—started classes on Aug. 1, and that had an impact on our attendance.

“The “Compel“ program helped keep our numbers respectable this summer. The program encourages churches located near Fall Creek to bring the lost, members who have lost their fire and those that have strayed away from the flock to an evening (IFC) service. Compel will become something we do at IFC on a yearly basis, and will be expanded to our entire state. Stephen Wall, director of missions in Chi-Ka-Sha Association, directed the program this year, and will continue to lead us next summer.”

While decisions were down from a year ago, when 140 professions of faith were recorded, 115 salvations were recorded this year, with 51 people making rededications, 11 surrendering to the ministry, six assurances of salvation, 66 asking for special prayer, and three other decisions, for a total of 252 decisions.

Cope said he expects IFC to be huge next year as it observes its 70th anniversary.

“Our numbers could reach record attendance in 2017 because the calendar dates will be more favorable,” he said. “The camp preacher for 2017 will be Mike Keahbone, a member of the Kiowa Nation of Oklahoma, and pastor of Oklahoma City, Cherokee Hills.

“The big celebration will consist of remembering the fallen giants of the past, current important leaders, historical memorabilia, revisiting the journey to this point in IFC history and praising God for His leadership throughout the years.”

Much like the youth weeks at Falls Creek in the summer arguably have become the largest in the world, IFC has an immense impact in its own right, Cope said.

“IFC has become the largest gathering of Indian Christians in the Northern Hemisphere. Churches, individuals and organizations attend camp to recharge their spiritual batteries, reconnect with friends in the ministry, look for a pastor, find God again, and network with the wealth of Indian Christian leaders who attend,” he said.

Its impact has grown steadily through the years.

“The IFC Board of Directors realized that camp must be more than just great preaching and singing,” Cope explained. “Board member Bill Barnett has championed the idea of expanding the role of IFC to be an equipping/teaching center. And, I believe we have built stronger churches by offering a more rigorous curriculum for our adults.

“For example, I recently experienced the influence of IFC on the Northern Plains on the Blackfeet Reservation in Browning, Mt. I was visiting homes and inviting people to our VBS and revival. I knocked on the door, and a young woman appeared in the doorway with a blank stare on her face which almost immediately grew into a big smile.

“‘Hey aren’t you that preacher from that big camp?’ she asked. I said, ‘Do you mean Indian Falls Creek? and she said ‘Yes. Preacher I was a little girl, and I accepted Jesus as my Savior in Tricky Ricky’s Children’s Church 15 years ago!’ She was still serving God.”

A wide variety of classes for all ages were offered at IFC this year, including a daily teaching time called ”Next Chapter” for high school graduates either heading to college or beginning a career. Offerings for young adults included Apologetics, Development of a Prayer Life, Timothy the Young Adult, Young Adult Worldview, Listening Evangelism, and Effective Young Adult Sunday School and Small Groups.

The WMU/NA Link offered a daily Bible Study for women based on Liz Curtis Higgs’ book, It’s Good to Be Queen: Becoming as Bold, Gracious and Wise as the Queen of Sheba, and daily classes on such topics as By All Means: New WMU Overview, and Dealing with Post Traumatic Stress Disorder.

Open Bible Conference topics included studies on various books of the Bible, followed up by skills conferences on Ministry to the Hurt and Grieving, Calling out the Called, Ministry to Native Youth, Ministry in Christian Drama, Spiritual Gifts to Christians, Suicide Prevention, How to Call A Pastor, Working with Children and Mission Trip Preparation.

“He was very dynamic; God used him in a tremendous way,” Cope said. “Our people were challenged by each message God sent through His powerful messenger.”

As always, IFC offered a variety of recreational pursuits and sports tournaments, all of which were very popular. Vacation Bible School was directed by Indian Mounds Church from Moundsville, Ala., with volunteers also coming from California, Colorado, Georgia, Louisiana and Texas to help.

And Children’s Church was led by “Tricky Ricky” Henson, as he has done for more than 30 years.

Cope said IFC couldn’t be conducted without the help of untold numbers of people and the support of many others.

“The IFC Board wants to thank the Baptist General Convention of Oklahoma (BGCO) for standing with us these past 69 years, the churches that continually allow us to use their beautiful cabins, the Edna McMillan State Missions Offering and BGCO Executive Director-Treasurer Anthony L. Jordan for all his support throughout the years.”