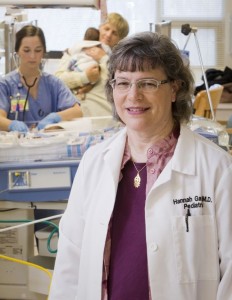 Hannah Gay, the University of Mississippi Medical Center pediatrician who achieved a functional cure of a child born with HIV, told Baptist Press she will continue to focus on prevention as the best way to save babies from the disease. Churches can help, she said, by encouraging healthy lifestyle choices through the spread of the Gospel. (Photo: UMMC)

She entered the specialty in 1994 initially because it allowed her to work part-time as a physician and spend time with her husband Paul and their four small children. The family had returned to Mississippi after the couple served six years as Baptist workers in the Horn of Africa.

Had the position been full-time, Gay said, she would not have taken it.

“The part-time position that was open at that time here at University Medical Center was to help with the HIV clinic. So, I took it for that reason. Unfortunately, it remained part-time work for only about two months. And then it became super full-time work. But I enjoyed it,” she told Baptist Press. “I was not at all trained in HIV. When I was in medical school and residency, pediatric HIV didn’t exist in our state. I was not trained in it and … didn’t choose it, but apparently God chose me for it.”

The HIV specialist and associate professor of pediatric infectious diseases at the University of Mississippi Medical Center said faith has been the defining factor in her life.

“My faith affects everything I do. It defines who I am,” Gay said. “It is actually everything I do and that includes my medical career. And certainly it’s the love of Christ that I’m passing on to these children [patients]. It’s not anything from myself; it comes from my faith.”

Gay made international headlines in March for achieving a “functional cure” of a baby born with HIV, a medical breakthrough that could lead to the elimination of the virus in children. As a “functional cure,” the viral presence is undetectable by standard tests but detectable by ultrasensitive methods in the child, who is now 2 years old. In a “sterilizing cure,” all viral traces would be completely eradicated from the body, according to medical terminology.

Gay promotes prevention as the best medicine and encourages churches to play an active role in achieving that goal.

“Our social consciousness needs to be centered on the Gospel and how the Gospel and Christ living in us can educate our lifestyle choices. And that will be the prevention of not only HIV but a whole host of other human suffering,” Gay said. “Christians and churches need to be engaged in their communities with education about Christ.”

Gay grew up in a Southern Baptist church, was exposed to Woman’s Missionary Union missions education while still in her mother’s womb, she said, and studied missions from an early age, participating in the Sonbeams children’s ministry, Girls in Action and Young Women’s Auxiliary.

“It was just sort of a part of my training, I guess, that when I got into my teen years and started asking the Lord, ‘OK, what do You want to do with me?’ that’s where He pointed me,” she said of her career in pediatrics. “And I pursued it from there.”

Having completed a pediatric residency at UMMC, she went to Africa in 1987 with the intention of teaching at a medical school there.

“When I got there, circumstances made it where I never actually taught in medical school, but that’s what I went to do. When we arrived in the country, there was an ongoing civil war and before we finished language school they had closed the pediatric wards of the teaching hospital due to the civil war,” Gay recounted. “Within very short order after that, they closed the medical school due to the civil war. And so I never actually taught in the medical school. But I … had an informal clinic for mission employees and their families, basically on my front porch.”

The family returned to Mississippi in 1993 to provide a more challenging education for their children, who were academically gifted and ranged in age from 3-10 years.

“So we just decided to stay here long enough to get our children educated with the hopes we would be able to go back to the mission field after that,” she said. “But as time would have it, I was found to have arthritis and started on medications that caused suppression of my immune system, and so the Horn of Africa was not a good place for me to be living with that kind of immune suppression.”

Gay has long advocated for early, aggressive antiretroviral treatment of babies born to HIV-infected mothers. She achieved the functional cure in a baby whose mother received no prenatal care and was diagnosed with HIV during labor. Gay began the baby on an aggressive three-drug therapy at birth, versus the conventional one-drug treatment, and continued through 18 months of age, when the mother stopped bringing the child in for checkups.

“After about 18 months of age, for the next five months, she didn’t return to clinic and when she did return to clinic then at 23 months, her mom admitted that she had not been giving the medicines,” Gay said.

Surprised when tests revealed no return of the virus, Gay consulted colleagues at the University of Massachusetts Medical School and Johns Hopkins University School of Medicine, who confirmed the functional cure.

“The definition of functional cure is not real precise,” Gay said, “but basically what we have is a child who has been off of medication for a prolonged period now without return of replicating virus.”

Gay said she continues to be drawn to pediatrics to help children begin making healthy choices early in life.

“To have the opportunity to start teaching healthy lifestyle choices and helping them make the right choices from the beginning is rewarding, as opposed to trying to treat things that have been building up over the years from poor choices,” she said. “I love working with the babies who are, for the most part, innocent. Sometimes that’s sad, but at least I’m not faced with someone who’s angry over something of their own making.”

Gay said she intends to continue to focus on prevention, as medical science seeks to replicate the functional cure in other victims.

“We work very hard to make sure that we identify as many women as possible who are HIV-infected during pregnancy and treat those women during the pregnancy,” she noted. “If we can do that we can prevent almost every case of transmission from mother to infant.”