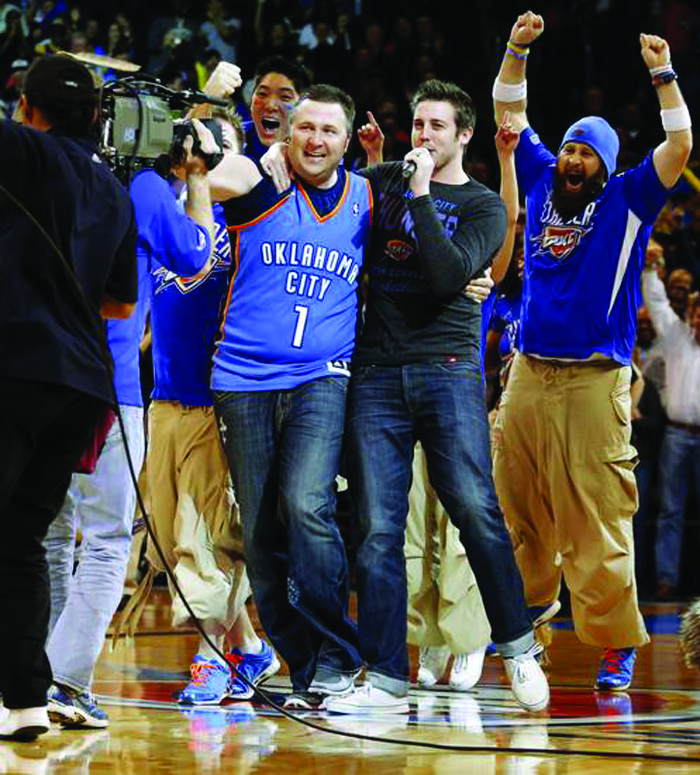 Jenni Kufahl was looking for an opportunity to share what she was experiencing. Battling Stage III appendix cancer and enduring chemotherapy for almost five months, she desired to “proclaim in the great assembly,” as it says in Psalm 40:9, about how God is working in her life through this battle.

Her idea of a “great assembly” was at a banquet at Christian Heritage Academy, where her husband, Heath, teaches and coaches basketball and volleyball. With approximately 600 people attending, she believed she fulfilled what God had in mind on the number of people who were to experience her story.

Heath and Jenni were given tickets to the Oklahoma City Thunder-Los Angeles Lakers game, March 5. A friend and supporter of CHA found out it was Heath’s birthday, and, on a whim, decided to give Heath his Thunder tickets for that game.

Since this was a week Jenni did not go through treatments, or as the Kufahls call it, one of her “good weeks,” they thought it would be good for both of them to go to the game. Knowing about a half-court shooting contest the Thunder have at every home game, Heath wanted to get to the game early for a chance to participate in the challenge for a chance to win $20,000.

Sure enough, Heath found the person in charge of selecting participants, and he was chosen for the contest. However, there was one condition. For this Thunder game, couples squared off in a free-throw shooting competition to advance and shoot from half court.

Jenni was very hesitant. She didn’t expect this to be part of the deal. It was great for Heath to compete, but now this meant she had to go on the floor of a sold-out Chesapeake Energy Arena during the Thunder-Lakers game, one of the most in-demand home games of the season, to shoot free throws.

Heath had to convince his cancer-stricken wife to do this. After much pleading, Jenni agreed to participate.

At the end of the third quarter, the Kufahls were ushered onto the court and placed on the free throw line of the basket near the Lakers bench. Heath was on fire. He nailed almost every shot he put up. Jenni did her part, actually hitting two shots herself, and they easily defeated the opposing couple.

Now came the big moment. Heath was handed the ball. With Rumble, the Thunder’s mascot, giving a drumroll and more than 18,000 onlookers, Heath squared up at half court and swished the shot. 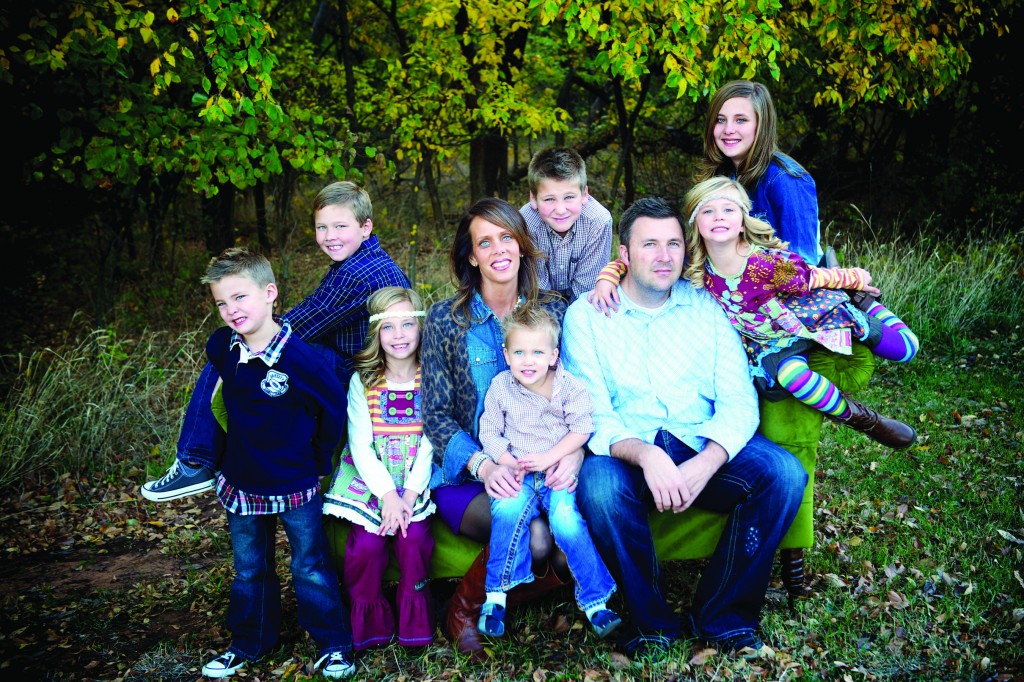 Heath and Jenni with their seven kids, ages 3-13.

Celebration exuded. Heath went running around the court, while Jenni just stood there in shock with her mouth wide open. Heath was the first person this Thunder season to make that half-court shot.

The following day, local and national media outlets wanted to feature this amazing story. ESPN, CNN and FoxNews all carried the story. Heath and Jenni did interviews. Many across the country were hearing about this amazing shot and finding out about Jenni’s story.

The money will go toward Jenni’s medical bills, but the response far exceeded their expectations.

“We’ve gotten notes and donations from people all over the United States,” Heath said. “From a woman in Washington who sent $10, saying she lost her job but wanted to do something to help. A 5-year-old girl in Duncan sent $5 with a note saying ‘We’re praying for you.’”

The Oklahoman ran a story about Heath hitting the shot and revealed Jenni’s battle with cancer. They were quick to thank the Lord for making this happen. On the newspaper’s website under the featured story, readers’ comments were featured. Some expressed their skepticism, even coming outright to say “The Lord doesn’t work that way.”

Heath and Jenni believe differently. They are confident God was involved with the whole experience.

“It wasn’t luck that (Heath) got
picked or made the shot,” she said. “The Lord orchestrated these events and went before us. He knew this was going to happen. Our desire through this is that God would receive glory, and that people would see how good God is.”

“If they knew from the way I got the tickets, from this being a week Jenni did not have her treatments, and rarely do they have couples (shooting free throws), you can’t have that many coincidences,” Heath said.

He also pointed out that another fan recently hit the half-court shot at a Thunder game, and it was just the sole participant who was required to be involved in the contest.

“If it was just me, it may not have garnered the same kind of attention. It turned into something bigger than just me hitting a shot,” he said.

Heath shared how he and Jenni have been able to tell their story at churches, including their own, Oklahoma City, Southern Hills. He also told how many lives have been affected, including students at his school. Even the parent who gave Heath the tickets expressed how this experienced helped turn his life around.

Those who believe God doesn’t involve Himself in such experiences are entitled to hold such opinions. However, they cannot deny the effect this opportunity has had on many lives.

It was a far greater “assembly” than even Jenni and Heath imagined.