In August 2011, the U.S. Department of Health and Human Services (HHS) unveiled a regulation that would require all groups require health insurance that covers abortion-inducing drugs (such as the so-called morning-after pill).

The HHS, which wrongly considers those pills as contraception, included what they call a “conscience clause” that would exempt religious organizations. Yet they define it so narrowly that only churches themselves may be exempt. As authorized under the President’s healthcare overhaul, within the next year, HHS will force all organizations, including private universities, not-for-profit charities and faith-based hospitals, to provide free contraception, sterilization and abortion-inducing drug coverage in their healthcare plans.

I recently met with presidents of a group of Oklahoma’s Christian-affiliated universities, and they expressed grave concern about their freedom to practice their faith and values without interference from the Federal government. I share this concern for them and religious organizations across our nation—be they church, para-church, hospitals and educational institutions alike.

The Bill of Rights explicitly protects the freedom of religion, with no caveats, exceptions or excuses.  Forcing private, religious institutions to offer healthcare coverage that explicitly defies their beliefs violates the spirit of the First Amendment to protect the religious freedoms of all Americans.

President Obama and his overzealous Secretary of Health and Human Services have decreed that religious institutions must change their faith to fit the preferences of the Administration; this is the definition of government restricting free exercise of religion. This administration is systematically ripping the freedoms from faith-focused Americans.

This must not stand.

On Jan. 20, due to the overwhelming outcry from many religious-based organizations and my colleagues in Congress, HHS Secretary Sebelius extended faith-based organizations and businesses an additional year of grace to implement the federal contraception and sterilization mandates. But, the college presidents te ll me, to even qualify for the one-year extension, you have to agree to provide information to the students and employees about where they can obtain these drugs. Under these constraints, I doubt many—if any—would apply.

Expecting these organizations to simply abandon the morals and tenets of their faith is a serious affront to religious liberty. Who could have predicted that the American government would give faith-based groups one year to surrender their beliefs or face the penalty of stiff fines?  Giving employers a one-year extension to ‘get over’ their moral beliefs shows a complete lack of respect for rights of conscience and individual religious beliefs.

I commend leaders in the Christian community, such as Richard Land, of the Southern Baptist Convention’s Ethics & Religious Liberty Commission, for taking an important stand on this issue.

James Lankford is Dist. 5 Representative in the U.S. Congress for the State of Oklahoma. 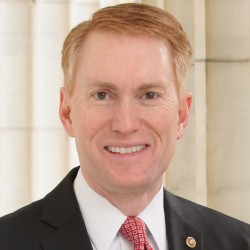 James Lankford is an U.S. Senator.

View all posts by James Lankford