GoStudents stay and serve in Oklahoma

GoStudents continues to help churches equip students to share the Gospel through mission projects all over the world. Though GoStudents scheduled multiple experiences in different parts of the country and internationally, the mission strategy also was applied in-state, traveling to three areas in Oklahoma. 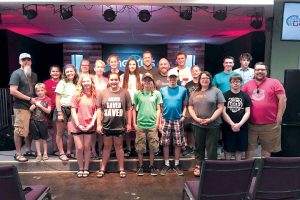 “(The students) met a boy who was interested in video games,” Jackson said. “They were able to talk with him about certain games which led to an opportunity to share the Gospel, and the young man made a profession of faith.”

Many parents were involved at the block parties. Jackson said a single mother of a four-year-old spoke to many members of the GoStudents team. They were able to get her plugged in to a local church.

“It’s an important thing to do,” Jackson said about having Oklahoma GoStudents projects. “A lot times when we’re talking about missions, students automatically think they have to go overseas to do that. But really, we have a mission field right here in our backyard with our neighbors and the community. To help shift their thinking on that, wherever we go is a missions trip. It was good for them to see that.

“It was good for me to see younger kids participate,” Jackson continued, “since many mission trips have age restrictions. (Oklahoma GoStudents projects) allow more opportunities for the younger kids to get involved and start having that mission-mindedness where they are thinking about that more often. And as they get older, they will be more prepared for those other trips.” 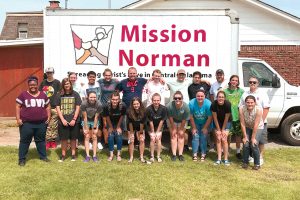 On July 14-18, GoStudents served with Mission Norman as part of the Oklahoma City project. Twenty students made up the GoStudents Oklahoma City team, representing nine churches, and five of the students were the sole representative of their respective church.

“We hit the ground running,” said Josh McKee, youth minister at Oklahoma City, Exchange Avenue, who led the GoStudents Oklahoma City team. “We had a block party that (first) night. Our goal was to have the students involved as much as possible. We wanted them to give a Gospel presentation.”

McKee said the team witnessed 12 young people make professions of faith in Christ during the four-day project. They also worked in apartment complexes and mobile home parks and did community ministry with homeless people. One day the team visited the J.D. McCarty Center in Norman and played with children with development disabilities.

At one mobile park, McKee said early turnouts for their Bible clubs were low, but they were not discouraged. Later in the week, they were able to connect with 16 children, and three made professions of faith in Christ.

The students had great results connecting with the homeless, McKee said, serving them sno cones and having times of prayer with them. “It was really awesome, watching the students work together,” he said.

They concluded the GoStudents project at Norman, Northeast, gathering for what McKee said they called a “Worship Service for One.”

“We gathered in the worship center at Norman, Northeast and started off with reading Scripture and praying,” McKee said. “We sang a song, and then had students read Scripture. It was an interactive worship service. We took time to pray over them before they left.”

McKee said the GoStudents Oklahoma City project was a great success and a good start to doing more in-state projects in the future.

“We realized that we don’t have to go across the Globe to be a part of mission work,” he said. “God doesn’t call all of us to be international missionaries, but He does call of us to be ministers of the Gospel.” 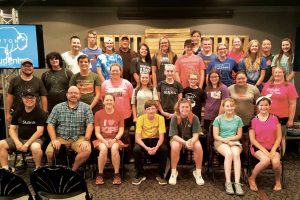 On July 20-24, the GoStudents Lawton team joined forces with M28 Ministries, an organization that is based on Matthew 28, the chapter where the “Great Commission” is found. The GoStudents Lawton team had the largest group among the in-state projects, with 31 participants, six adults and 25 students, representing 10 churches that are located in different parts of Oklahoma, including Hollis, Vinita, Pauls Valley, Choctaw and Midwest City.

Aaron Myers, youth minister at Lawton, First, was a leader of the GoStudents Lawton team. He shared the team witnessed many people make professions of faith in Christ, and at one of the block parties they ran, they observed 15 baptisms.

“(The students) were excited to share their testimonies and see people come to know the Lord,” Myers said.

Along with block parties, students got to connect with approximately 75 children at the Boys and Girls Club of Lawton, sharing the Gospel while playing games with the kids. Through M28 Ministries, the team served homeless and needy people and were not afraid to pray with them or share the Gospel.

“These state trips are very helpful,” Myers said about the GoStudents Oklahoma projects. “The younger students were able to be involved because it’s not an international trip. They are comfortable to be a part.”

Myers said some of the students on the Lawton team previously did GoStudents projects in Portland or Seattle. “This gives them a picture that they can also do this at home just as much as going somewhere, even if it is another town in Oklahoma.”