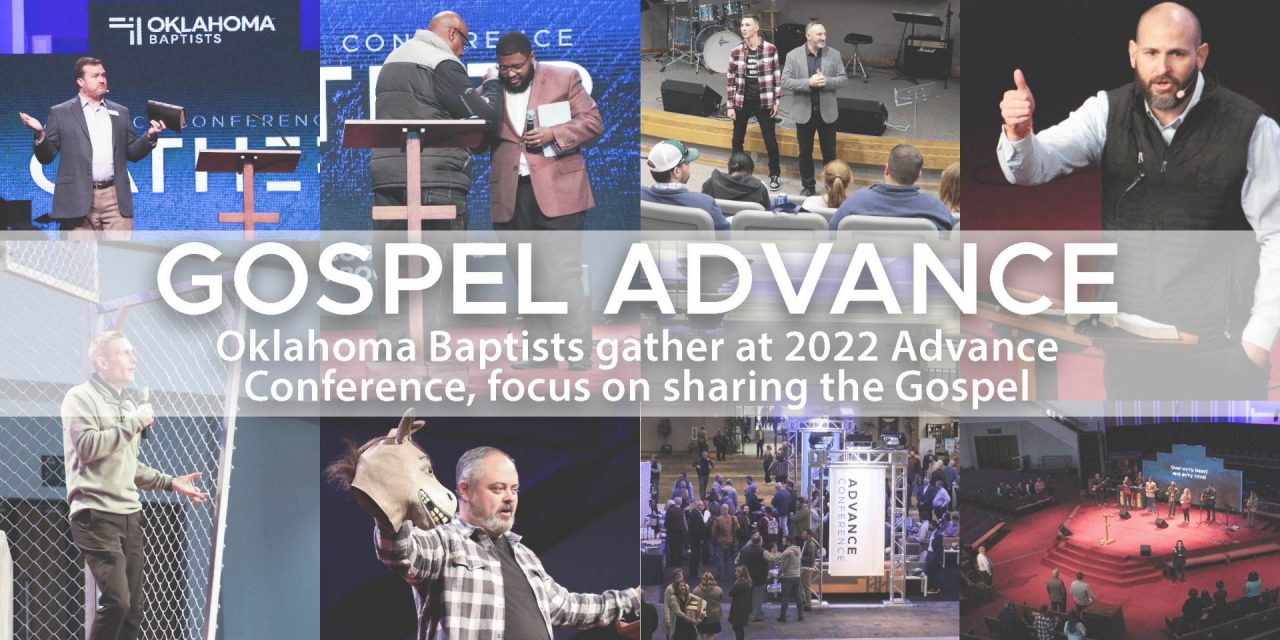 MOORE—The Advance Conference proved to be a success, as many across Oklahoma attended the event, Jan. 24-25 at Moore, First.

The Advance Conference also offered a time for attendees to attend breakout sessions on Tuesday morning. From an offering of 20 breakout subjects, attendees could attended two of these sessions that covered topics such as leading a small church to be a Great Commission church, “Do’s and Don’ts of Child Evangelism,” “How to Make Disciples in 2022,” evangelism among Spanish speakers, rural areas, Native Americans and with African American churches.

Here is a summary of what the main speakers addressed at the Advance Conference. 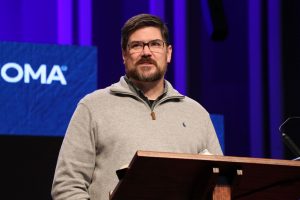 Todd Sanders, Falls Creek program director and Oklahoma Baptists’ ministry partner for student ministry, gave an example in his own walk with the Lord of what it looks like to disciple believers who are young in their Christian faith. He pointed out that it did not involve only in-depth study of books of the Bible or deep theology

“This was prayer and time with the Lord and Bible study and Bible memory and what it meant to be a church member,” Sanders said, recalling his time as a young member of Davis, First. “(It included) what stewardship looked like and Christian living and holy life and all of those things that are foundational and basic—witnessing and service in life and commitment to the body, what it meant to be a believer. This what they poured into us… Leaders pouring into young believers, so they can grow into their faith.” 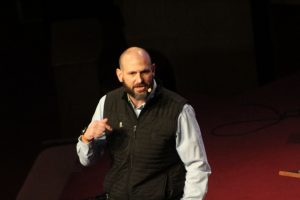 Rusty McMullen, pastor of McAlester, First, spoke on Acts 2:14-41, sharing about Peter preaching on Pentecost and challenging conference attendees to speak the Gospel.

“Understand this, if you are a believer of Jesus Christ—man or woman—you are an ambassador for Christ,” McMullen said. “An ambassador is someone who speaks with the authority of someone else. This morning, brothers and sisters, all across this room, wherever you are, whether you are taking pictures or running sound, you’re singing on the stage, you’re the executive director of our convention, you’re the pastor. . . it doesn’t matter. If you’re a lay person, if you’re a deacon, it doesn’t matter if you work in the secular world or work in the religious world. You are called to be an ambassador, and Jesus will give you the power of the Holy Spirit in order for you to accomplish and fulfill that ambassadorship.” 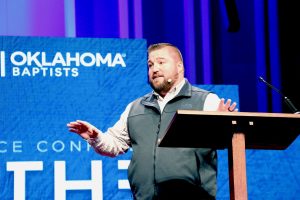 Brock Hardin, pastor of Heavener, First, followed up McMullen’s sermon speaking from I Pet. 1:3-9. He said Peter is writing in his first epistle to people who are hurting and offering them hope. 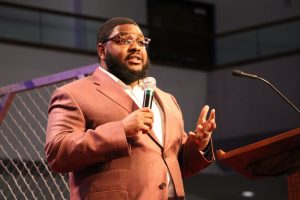 Rickey Thomas, community ministry evangelism ministry partner for Oklahoma Baptists, opened the Monday afternoon session with a sermon on Luke 4:18, claiming all Christians are on assignment.

“Share your life story and how Jesus made a difference in your life and get involved in community ministry,” Thomas said. “Leave your beautiful church buildings and hit the streets serving those in need.

“Just like Jesus, you were placed on this earth with a divine assignment,” he continued. “You are assigned to love those that society hates and even those that the Christian church has unduly condemned. You are on assignment. Share your story that Jesus has made a difference. Then, you will have changed a life here in the present and in eternity.” 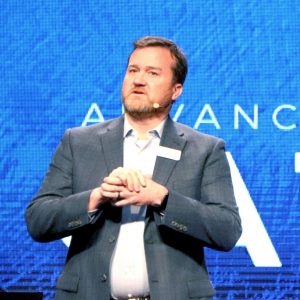 Todd Fisher, executive director-treasurer for Oklahoma Baptists, spoke on overcoming obstacles in sharing the Gospel, addressing how it is not popular to give a clear Christian witness in today’s society.

“Let’s be real honest,” he said. “The Gospel that we are called to proclaim is not popular with the world today. And it wasn’t popular in Paul’s day.”

Fisher talked about how religious people in New Testament times wanted to “accommodate cultural hot topics of Greek philosophy” and blend it with Christian beliefs, making it more palatable for society.

Fisher then shared the problem with this view. “If you water down the Gospel, it’s not the Gospel anymore,” he said. “If I truncate the Gospel, if I change it or modify it from what the Scripture teaches, that’s not a Gospel that is going to save anybody. God gave us the Gospel in wholeness and completeness, and that’s what we’re called to carry out.” 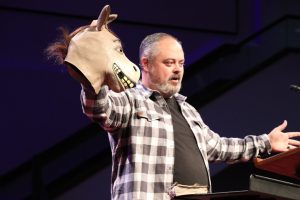 Rusty Gunn, pastor of Sand Springs, Church That Matters, opened the Monday evening session with a message titled “Go and Tell” and compared conditions the Israelites were experiencing in 2 Kings 6-7 to the recent pandemic the world has been experiencing.

Gunn compared the challenges of struggling to find resources for today to the severe famine mentioned in 2 Kings 6:25, when people were desperate to buy a donkey’s head for food.

He then spoke of the four lepers in 2 Kings 7 who found an abundance of food and supplies and realized that hoarding the goods for themselves was not right.

“’Today is a day of Good News,’” Gunn said quoting 2 Kings 7:9. “These four lepers are saying ‘Today is a Gospel day.’ We’re not doing the right thing by keeping it to ourselves. I hope you understand that you and I were never meant to be receptacles of God’s great mercy and love; (instead) we are to be channels. We’re not the destination of it; we’re the place that passes through. God saved you with someone else in mind.” 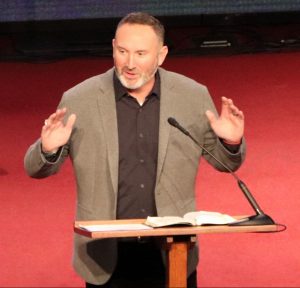 Jeremy Freeman, pastor of Newcastle, First, concluded the Monday evening session speaking from 1 Corinthians 9 and emphasizing “For the sake of the Gospel.”

Freeman spoke on Christians needing to stay burdened, keep perspective and run focused. And he talked about how experiencing suffering benefits Christians.

“Suffering softens you to what doesn’t matter and strengthens you for what does matter,” he said. “When you suffer, all of a sudden, things kind of fade away that don’t really matter. When someone is on their deathbed, they’re not worried about things that don’t matter. They are focused on what does. In suffering, God has a way to keep us focused… suffering has altered us in a good way to help us run with eternal focus. We’ve tried not to waste our suffering. We’ve tried to use it for the sake of the Gospel.” 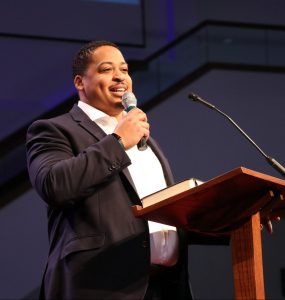 “Paul wants this church (the church in Corinth) to have an accurate assessment of God’s role and the servant’s role,” Bailey said. “There are three things we need to know about this ‘garden,’ in a sense that it is not ours.

Bailey’s three points were 1. You are God’s field; 2. Growth belongs to God; 3. The Lord rewards our works. 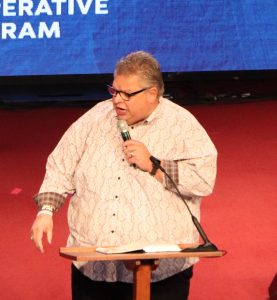 National evangelist Bill Britt preached from John 21:15-17 and talked about what preachers and church leaders should do when facing discouragement.

“I want to encourage the sowers to sow the seed,” said Britt, who serves with Compel Outreach International. “The greatest tool of the devil is to discourage the sower from sowing the seed.”

Britt talked about Peter denying Jesus three times and then appearing to give up and go back to fishing, his previous livelihood. But Jesus spoke to Peter, Britt said, and encouraged him to serve God by serving others. This led to Peter preaching at Pentecost when 3,000 people became followers of Christ.

“Sometimes we quit right before the greatest victory,” Britt said. “Sometimes we give up when God’s really moving. We don’t feel like it; we don’t see it, but God is moving and always has a plan.” 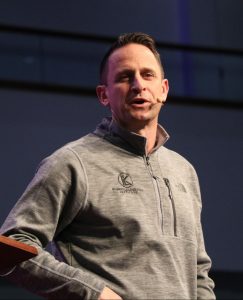 Brian Mills, pastor of Yukon, Trinity, also spoke to attendees about dealing with discouragement and spent time at the beginning of his sermon praying for pastors and church leaders who were discouraged.

He also gave a challenge to pray for every church that is meeting. 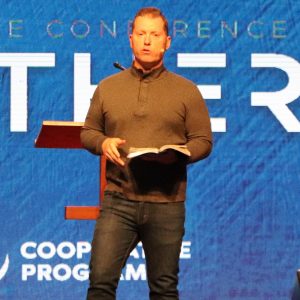 Matt Brooks, pastor of Broken Arrow, First, offered a “model of BLESS” when he concluded the Advance Conference. This is what pastors and churches should model, Brooks preached, as an example of how to reach communities.

Brooks said churches should 1. Build relationships by prayer; 2. Listen and respond; 3. Eat with others and talk about Jesus; 4. Serve others for Jesus; 5. Share His story through your story.

“God is already working among the people He places you to work,” Brooks said. “If we are going to empower our people to do what God has commissioned us to do, what Christ has commanded us to do, (this) involves Jesus’ life becoming their own.”

All messages delivered during the Advance Conference will be available in coming weeks for viewing online. Visit oklahomabaptists.org/advance for more information and to view the sermons.