ARDMORE–“Called to Fish” was the focus of this year’s Oklahoma Indian Evangelism Conference (OIEC). At noon on March 16 at Ardmore, Emmanuel many gathered to learn how to reach Native Americans with the Gospel.

The OIEC began with a lunch fellowship. At the conclusion of lunch, Emerson Falls, Native American specialist for the Baptist General Convention of Oklahoma (BGCO), explained the schedule for the conference and introduced the breakout speakers. 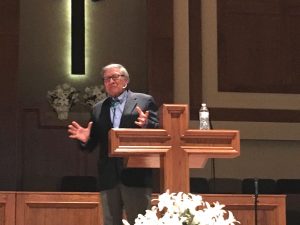 Falls explained that evangelism can be a process and shared how to reach the unchurched Native Americans. Mike Napier, BGCO personal evangelism specialist, shared the resources available through his office and how to utilize them in everyday life by combining these tools with  strategy.

Jesse Pacheco shared some of the challenges of working with young adults and ways to reach and keep this age group in church. Linda Lewis explained how to engage children, so that they want to return and how to break out of routine in order to try something new. Vincent Baptiste looked at challenges and practical ways to reach Native youth and shared Scriptures to encourage those in youth ministry.

Following dinner, the first service began with worship led by Donnell Cox and band and Larry and JoAnn Hawkins.

Woody Wilson was the opening speaker for the OIEC. He taught from Mark 1:16-18 and emphasized that Christians are to keep following Jesus. Wilson shared that Jesus saw something in the disciples and that He changed the disciples’ names.

Wilson said Jesus told Peter, “I no longer want you to be known as Simon the fisher, but instead Simon the fisher of men.” In comparing salvations to fishing he said, “We haven’t even come close to hitting our limit; we have to go fishing.”

He spoke with boldness, “If there are empty Sunday School rooms, we need to go fishing!” He closed with a call to continue fishing and to raise up the younger generation to cast the net in their place when the time comes. 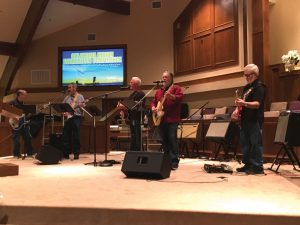 He said, “Dr. Jordan, we know that you love Native American people but we want you to know that we love you.” Steve Wall, director of missions in Chi-Ka-Sha Association, presented Jordan an authentic tomahawk.

Jordan delivered the final Friday night sermon titled, “What’s Your Story?” He began with a thank you for the opportunity to preach in Native American churches throughout his time at the BGCO.

Jordan used 1 Tim. 1 to explain how to bait the hook. He referenced the frustration that comes when people do not respond to the Gospel the first time by saying, “I am glad God didn’t give up on me on the first time.”

He said “Your story is the bait on the hook to win people to Jesus.” Jordan challenged those in attendance to share their story continuously within the next 24 hours and asked them to bridge their story to Christ’s story.

The evening concluded with a reception in honor of Jordan. 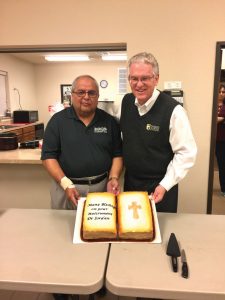 On Saturday morning following breakfast, the Hawkinses led woship, and Lena Johnson shared in a special time of music. Jay Mule followed worship, preaching a sermon out of Matt. 4.

“Do you believe what you’re doing or not?” Mule asked. “What I have learned the hard way is that you cannot go half way with God and make it in the ministry. You have to be doing more.”

Mule challenged OIEC attendees by saying that if they wanted to see people make a decision for Christ they had to be all in for the Lord and be prepared.

Jimmy Anderson presented the closing sermon of the OIEC from 1 Cor. 1:26-29. He explained who can be a fisher of men.

The biggest challenge in churches, Anderson said, is to get church members to witness. He continued saying, to learn anything, church members have to practice it. Anderson emphasized that the same is true for witnessing.

Anderson said that God does not choose like others do. He uses anybody and makes a warrior out of them.

“He doesn’t call the qualified. He qualifies the called,” Anderson said. “God can use anybody.” He concluded by reminding those in attendance that the mission field is right outside their church doors.

View all posts by Hannah Sawyers