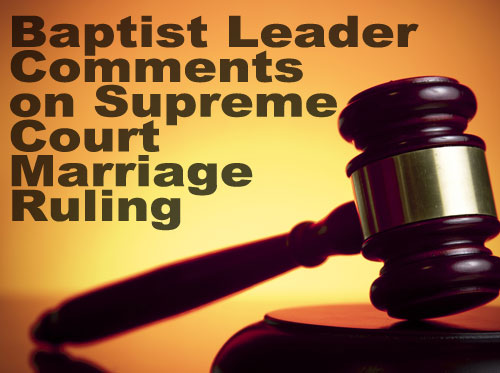 WASHINGTON (BP) — The U.S. Supreme Court has delivered a historic ruling in favor of same-sex marriage, but it stopped short of redefining marriage nationwide. 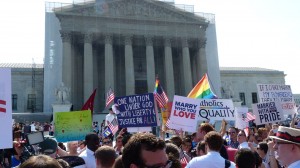 Hundreds of same-sex marriage supporters await today’s Supreme Court decisions at a rally in front of the court building, which is undergoing repair. (Photo: Tom Strode)

In one of two rulings regarding gay marriage, the high court struck down Wednesday (June 26) a federal law defining marriage as only between a man and a woman.

In a breakthrough for homosexual couples, the court said in a 5-4 decision the Defense of Marriage Act (DOMA) violated “equal protection” under the Constitution by refusing to recognize gay marriages. The opinion means same-sex couples will have access to employee, Social Security, tax and other benefits previously limited to heterosexual couples.

In the other case about gay marriage, the justices appeared to provide a limited victory for same-sex marriage advocates. The court’s 5-4 ruling on a procedural question apparently will have the effect of allowing to stand a federal judge’s invalidation of a California amendment that limited marriage to heterosexual couples.

In its opinions, however, the Supreme Court did not legalize same-sex marriage throughout the country or rule that states cannot limit marriage to a man and a woman.

“The grounding of this decision in equal protection and human dignity means this is not simply a procedural matter of federalism. This is a new legal reality,” said Moore, president of the Ethics & Religious Liberty Commission.

Appearing on CNN Wednesday morning, R. Albert Mohler Jr. said many dates in American history stand out as red letter days and “this is one of those days.”

“I think even as there are many people celebrating this, we recognize this is a major cultural divide over something as basic as marriage,” said Mohler, president of Southern Baptist Theological Seminary. “It is, I think, something that will be very, very devastating for our country over the long term because what it means is the inevitable marginalization of marriage and the subversion of the most essential institution for human existence.”

Executive Committee President Frank Page called the DOMA decision in a written statement “a wrong decision with far-reaching moral and religious liberty implications. With one stroke of the pen, this Court has redefined the universal, historical, and biblical ideal of marriage as a monogamous relationship between one man and one woman.”

In contrast, same-sex marriage advocates were ecstatic at the developments.

Kevin Cathcart, executive director of Lambda Legal, described it as a “thrilling day.”

“[O]nce again, our world has changed,” he wrote on his blog. “We are two steps closer to the goal of full equality for [lesbian, gay, bisexual and transgender] Americans.”

In a statement, Obama said he had directed Attorney General Eric Holder “to work with other members of my Cabinet to review all relevant federal statutes to ensure this decision, including its implications for Federal benefits and obligations, is implemented swiftly and smoothly.”

On CNN, Mohler said he believes marriage “is a pre-political institution that God gave to all His human creatures and that it always has been and always must be the union of a man and a woman. To radically transform the institution of marriage is to change the definition of what it means for humans to exist together in community.”

In his statement, Moore told Southern Baptists and other Christians, “Same-sex marriage is headed for your community. This is no time for fear or outrage or politicizing. It’s a time for forgiven sinners, like us, to do what the people of Christ have always done. It’s time for us to point beyond our family values and our culture wars to the cross of Christ as we say: ‘Behold, the Lamb of God who takes away the sins of the world.’ And that’s good news.”

In the DOMA ruling, the Supreme Court affirmed lower court decisions that struck down only Section 3 of the law passed by Congress and signed by President Clinton in 1996. Section 3 defines marriage as a heterosexual union for purposes of such matters as federal benefits and bars the federal government from recognizing same-sex marriages.

Kennedy seemed to indicate DOMA was “motivated by an improper animus or purpose.” It deviates from the tradition of the federal government recognizing state definitions of marriage and provides evidence of disapproving of a class of citizens, he said.

“The avowed purpose and practical effect of [DOMA] are to impose a disadvantage, a separate status, and so a stigma upon all who enter into same-sex marriages made lawful by the unquestioned authority of the States,” Kennedy wrote.

No states had legalized same-sex marriage when DOMA was enacted in 1996, but 12 states and the District of Columbia now have done so.

DOMA’s purpose is to treat gay marriages recognized by states as “second-class marriages for purposes of federal law,” Kennedy said.

The law is unconstitutional because “no legitimate purpose overcomes the purpose and effect to disparage and to injure those whom the State, by its marriage laws, sought to protect in personhood and dignity,” he wrote.

Joining Kennedy in the majority were the four associate justices considered the most liberal on the court: Ruth Bader Ginsburg; Stephen Breyer; Sonia Sotomayor; and Elena Kagan.

In his dissent, Associate Justice Antonin Scalia said he is certain the majority’s accusations that Congress and Clinton acted maliciously toward same-sex couples are false. “To hurl such accusations so casually demeans this institution,” he said.

In its other same-sex marriage decision, the high court did not rule on the constitutionality of a California amendment known as Proposition 8. Instead, it ruled Prop 8’s supporters — who appealed a lower court ruling after the governor and attorney general refused to do so — did not have standing, or the legal right, to make such an appeal. The justices sent the case back to the Ninth Circuit Court of Appeals in San Francisco and ordered it to dismiss the appeal.

In the majority opinion, Roberts said the Supreme Court declined to break precedent in the case. “We have never before upheld the standing of a private party to defend the constitutionality of a state statute when state officials have chosen not to,” he wrote.

The ruling made for an unusual mixture of conservative and liberal justices on each side. Joining Roberts in the majority were Scalia, Ginsburg, Breyer and Kagan. Dissenting were Kennedy, Thomas, Alito and Sotomayor.

California Gov. Jerry Brown announced later Wednesday he had directed the Department of Public Health to “advise the state’s counties that they must begin issuing marriage licenses” to same-sex couples throughout the state when the Ninth Circuit rules in response to the Supreme Court’s order.

Alliance Defending Freedom, which helped defend Prop 8, contended, however, the amendment is still the “law of the land in California.” It apparently reasoned the federal judge’s ruling applies only to the district of his jurisdiction and not the entire state.

California voters approved Proposition 8 as an amendment to the state constitution in 2008 after the state Supreme Court had legalized gay marriage earlier in the year. The Ninth Circuit, however, affirmed a federal judge’s decision striking down the amendment.

Defenders of the biblical, traditional definition of marriage expressed some relief that the Supreme Court limited the reach of its decisions.

The justices “could have gone much further and struck down the marriage amendments which are in 30 states,” Family Research Council President Tony Perkins said in the same CNN interview with Mohler. “They did not do that. This only applies to California, and how it’s going to be implemented we don’t yet know as we are still combing through the opinion.” 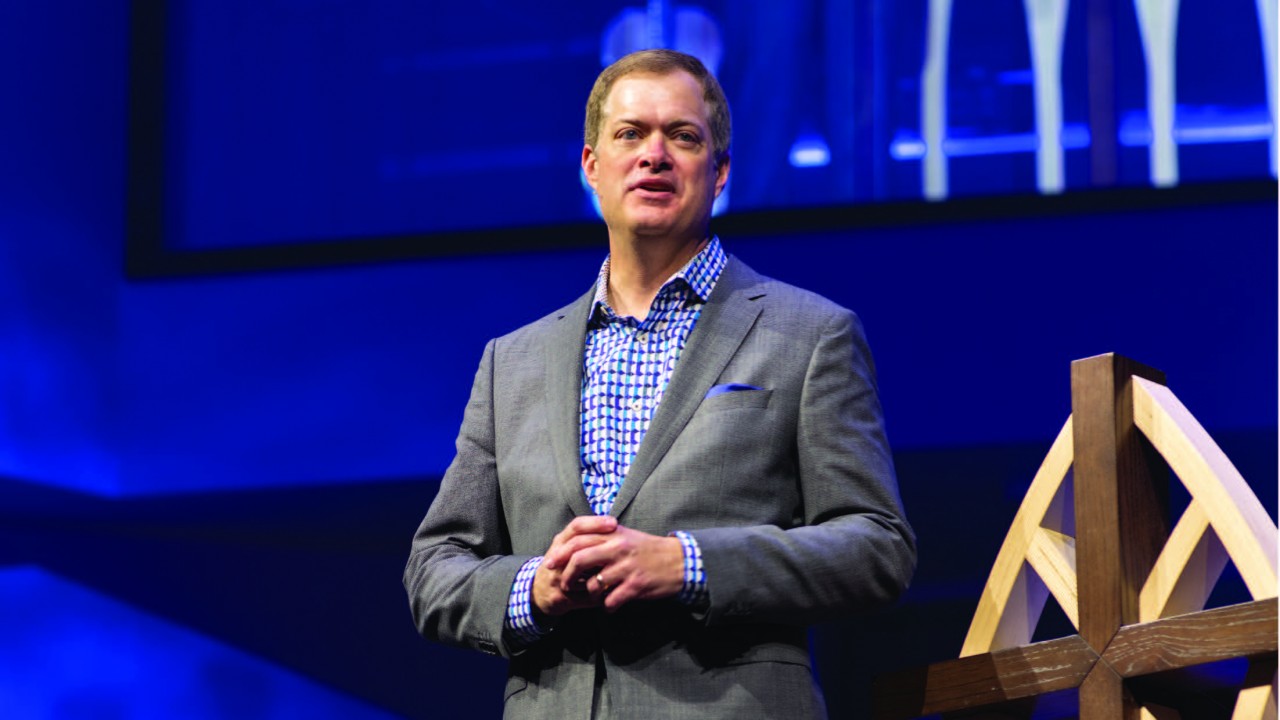 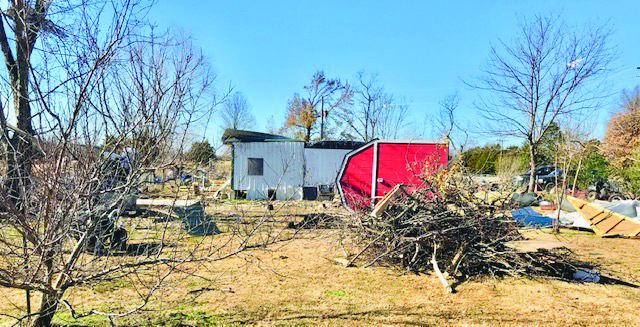 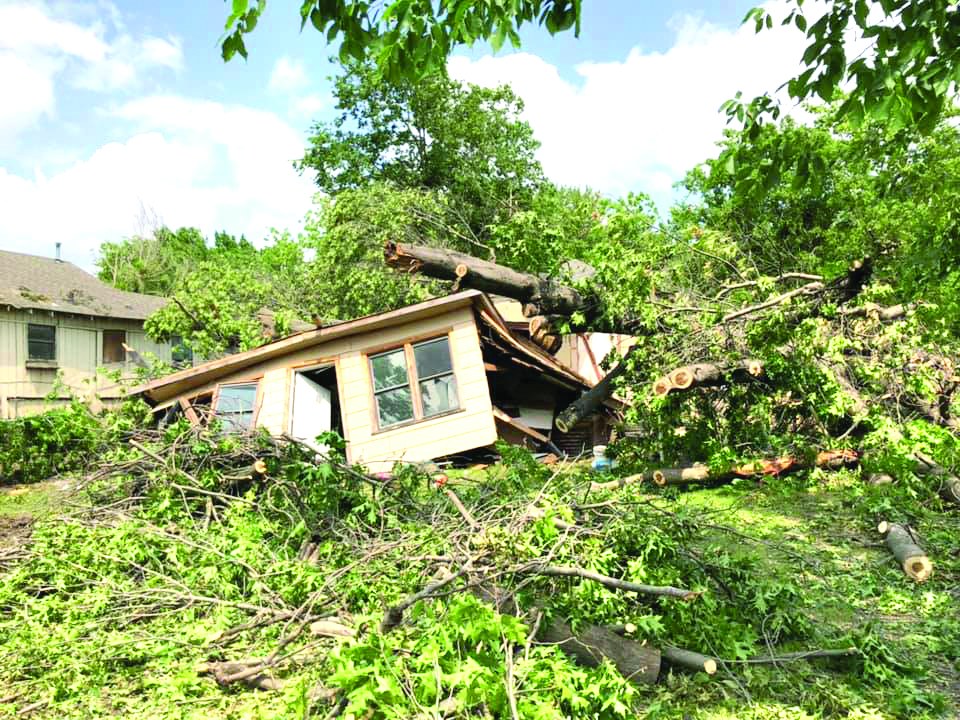