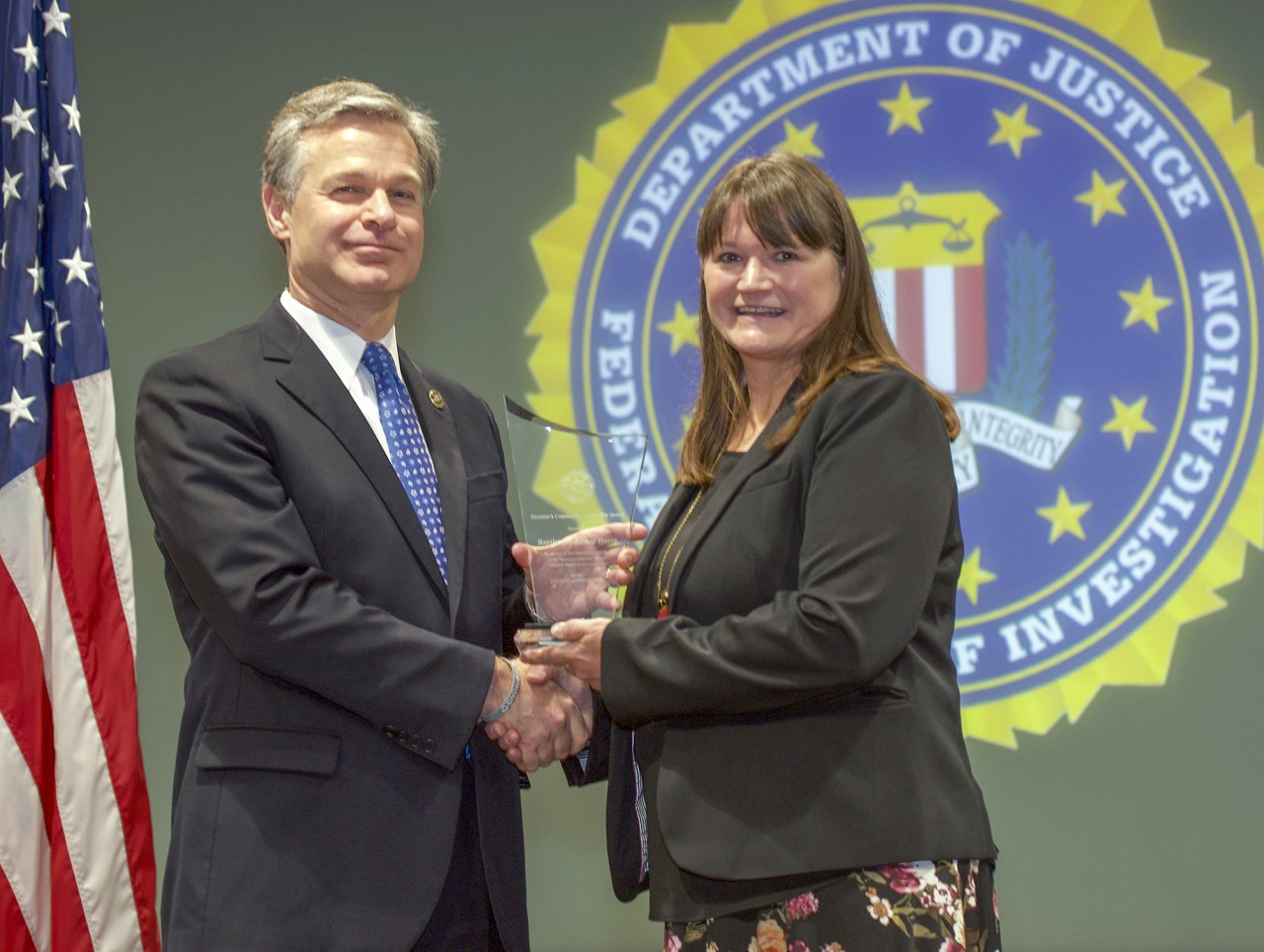 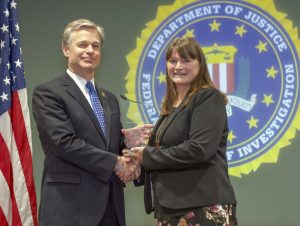 Kay Bennett (right) accepted the 2018 Director’s Community Leadership Award on May 3 from FBI Director Christopher Wray. Bennett is a Send Relief missionary with the North American Mission Board who operates the Baptist Friendship House in New Orleans.
FBI photo.

“It’s very humbling, to be honest,” said Bennett, who has served as the director of the Baptist Friendship House since 1997. “That was my first feeling … to be recognized with such a great group from all the states and the different FBI field offices. It was a beautiful picture of how it takes all of us working together to make our world a better place. It’s encouraging to know that people believe in what you’re doing.”

The FBI’s 56 field offices, including the office in New Orleans, chose communities and community organizations that supported their efforts to protect Americans against crime and extremism.

“For many years, the FBI New Orleans Field Office and the Baptist Friendship House have worked together to combat human trafficking in the city of New Orleans,” said Eric J. Rommal, FBI New Orleans Special Agent in Charge. “Their staff continues to serve the shelter with compassion, dedication, and professionalism. Whether rescuing victims from human trafficking situations, providing victim services to those in need, or supporting community outreach efforts across the metropolitan area, the Baptist Friendship House is just a phone call away and is always willing to answer the call for service.”

Bennett says an interaction with one of the homeless families staying at the Baptist Friendship House a few years ago opened her eyes to human trafficking. A mother and daughter were playing in a park across the street when a stranger offered to buy the daughter. NAMB featured their story in a 2013 Annie Armstrong Easter Offering video.

“I’ve done homeless ministry for almost 30 years in our city,” Bennett said. “If you do homeless ministry, it’s a natural fit. Homeless folks are very vulnerable to being trafficked. Once someone is rescued from a trafficking situation, they’re often homeless. Also, in doing homeless ministry, down the road after people have been sold over and over again, sometimes induced with drugs and their bodies have worn out, they often get thrown away like a piece of trash on the street. They walk through our doors then for showers and clothing.”

In preparation for New Orleans hosting Super Bowl XLVII in February of 2013, Bennett also participated in a human trafficking task force in the city to prepare for the expected increase of trafficking surrounding the event.

Today, Bennett and the Baptist Friendship House participate in a number of activities to bring awareness to the issue, advocate for victims and provide tangible assistance to those impacted.

The Baptist Friendship House can either provide housing for women and children impacted by trafficking or get them into safe houses. They also can help victims get into long-term treatment plans in New Orleans or provide them with transportation to other locations closer to where they are from.

“Human trafficking is the fastest-growing criminal industry in the world, and it is all around us here in the United States,” Bennett said. “I think it’s very important that we, as Southern Baptists, look around us, assess needs, see what’s going on and reach out to help people.”

The Baptist Friendship House also uses Send Relief backpacks, provided by Southern Baptists, to aid victims. Bennett believes these backpacks are some of the most effective tools they have to fight human trafficking. Last year they packed 5,000 backpacks with needed supplies, and they plan to pack 6,000 this year.

Bennett says that when she gets a call from the Human Trafficking Hotline to go and pick up someone who has been impacted by trafficking, she takes a backpack.

“When everything has been taken away from them and you have something to give them, it says. ‘I care about you,'” Bennett said.

Bennett and the Baptist Friendship House have also been active in training Southern Baptists nationwide to fight human trafficking in their community.

For more information about how you or your church can get involved in the fight against human trafficking, visit sendrelief.org.