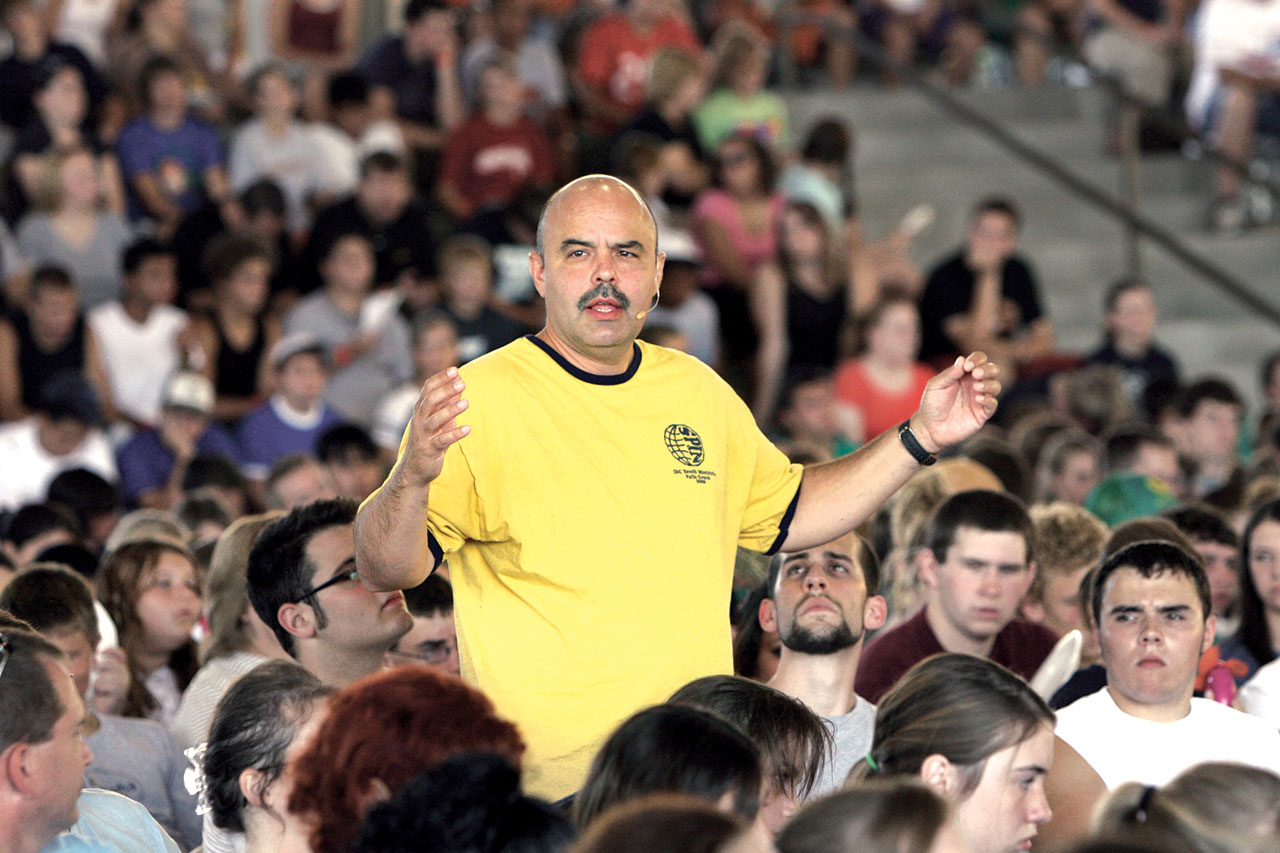 Andy Harrison helped develop the new technique for Falls Creek which was creating a short, four-part film on each year’s camp theme, focusing on a parable that teaches biblical truths
[Photo provided]

DAVIS—Andy Harrison has served in many roles during his ministry career. From youth minister to student education specialist to Falls Creek program director, Harrison has done it all in student ministry. And in 2019, he will take on a new role that impacts students and countless others across the state and region, as leaders with the Baptist General Convention of Oklahoma (BGCO) announced that Harrison will become the new Director of Conference Centers effective January 2019.

Then again, Falls Creek has been home to Harrison for almost 20 years. As Harrison recalled, “I have spent every summer at Falls Creek over the past 19 years serving in some capacity, whether it was teaching as a part of the student ministry team or serving as program director.”

Harrison began his time serving the youth of Oklahoma in 1985 at Tulsa, Parkview. He served for two years, left to complete school, then returned and served as youth pastor until 1991.

Harrison served at Durant, First until 2000, when he accepted a position with the BGCO as student education specialist.

As Harrison stepped into his role as student education specialist for the BGCO, he began engaging Oklahoma youth pastors and leaders through Sunday School conferences and developing discipleship curriculum. He also continued equipping students through his teaching at youth camp.

In his time in the role as student education specialist, Harrison developed valuable curriculum pieces such as “Moral Compass Parent Ministry,” “Sumphero Youth Discipleship” and “Project Love.” He also began “Excellence in Youth Ministry” as an initiative to raise the level of youth ministry in Okahoma.

Until 2009, James Lankford served as Falls Creek program director. Soon, however, Lankford would begin his campaign for United States House of Representatives (currently serving as Oklahoma’s U.S. Senator). That is when Harrison stepped into the position of interim program director. Later that fall, Harrison began working with the student ministry team to lead his first summer of youth camp at Falls Creek.

/// Falls Creek as a ministry home

“The summer of 2019 would have marked my 10th summer as program director for Falls Creek,” Harrison said. “God began to tell me this past summer that a transition was in my future.”

Harrison said he spoke with Hance Dilbeck, executive director-treasurer of the BGCO, about how the Lord was speaking to him. Around the same time, Keith Burkhart, who was serving as Conference Centers director, announced that he would make the transition from Falls Creek to pastor at Del City, First Southern.

It became clear that the decision for Harrison to step into the role as director of Conference Centers was what the Lord had planned.
“I’ve always been a person that if God opens a door, you step through it unless He closes it. And He’s kept this one open.

“I’m not leaving as program director because I no longer love the job. In fact, nothing could be further from the truth. I am just transitioning to something new according to the Lord’s leadership. This has become very clear to me.”

He said he experienced great trepidation about the new role, as he will be leaving student ministry after serving Oklahoma youth for 33 years. “It’s difficult to leave student ministry, an area I love so much, but God’s made it known this is what He has for me,” Harrison said. 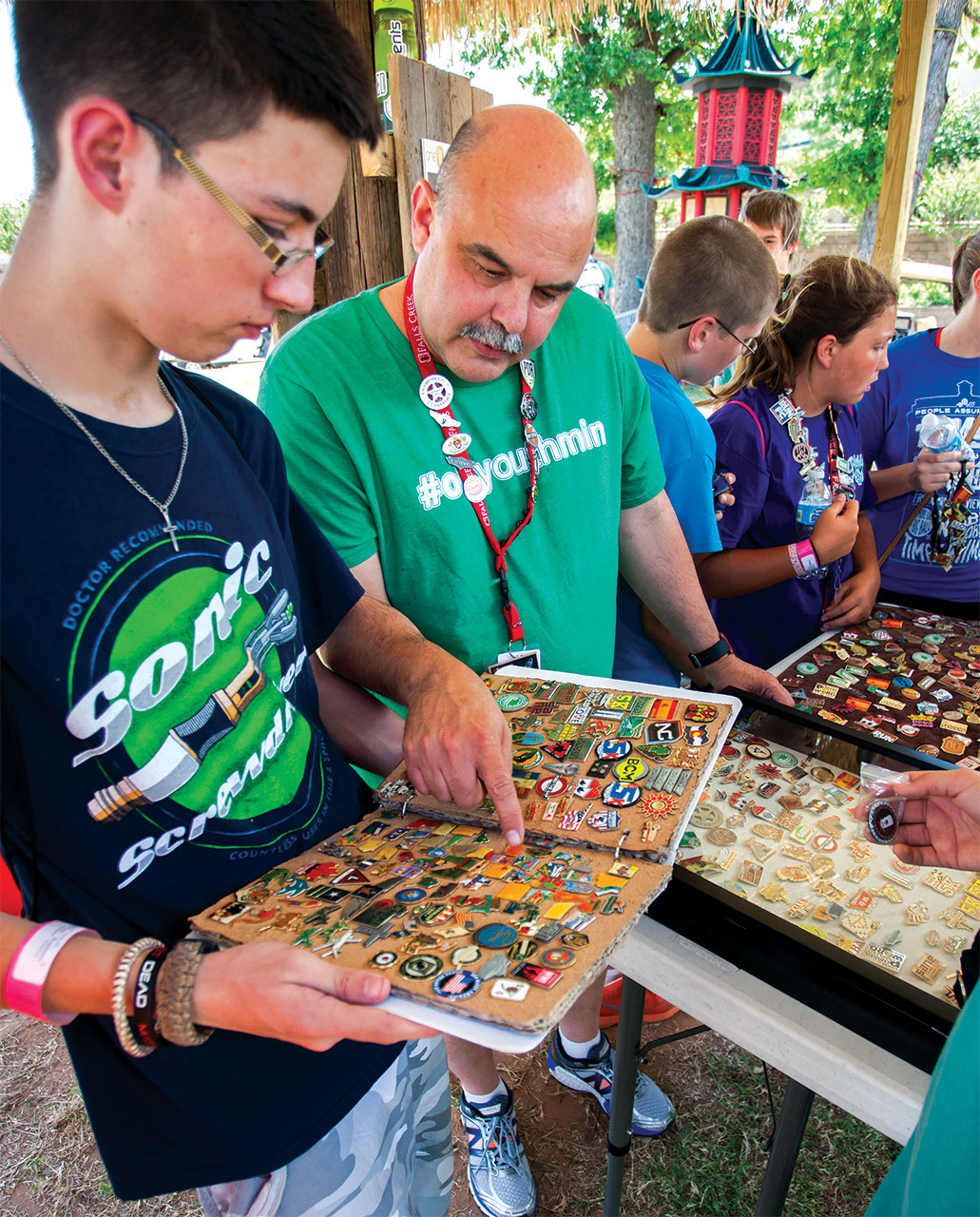 Harrison points out a pin to a camper, who has collected numerous souvenir pins while at camp.
[Photo provided]

BGCO leadership is confident that Harrison is the man for the job.

“Andy has significantly influenced the growth of Falls Creek,” said Scott Phillips, BGCO Operations Team leader. “There is no individual with the knowledge and experience he brings to the role of director. God continues to bless Falls Creek with great leaders like Andy. The future continues to be very bright under his direction.”

“Andy has a front row seat to the Lord’s work at Falls Creek,” Dilbeck said. “No one loves Falls Creek like Andy Harrison. He has unique insight into the challenges, opportunities and worldwide impact of our Conference Centers.”

/// The future at Falls Creek

Harrison looks forward to stepping into the role of director at the beginning of 2019. His family loves Falls Creek as much as he does. “My kids grew up not knowing summers without Falls Creek,” he said, so the transition will be a homecoming of sorts for the Harrison family.

“Falls Creek or CrossTimbers are some of the best days and memories of kids growing up in Oklahoma. Who would not want to be a part of what God is doing in those places?” Harrison said.

In his new role, Harrison specifically looks forward to getting acquainted with cabin owners of Falls Creek. “I want to make sure, first and foremost, that we partner well with those who have cooperated so faithfully with us throughout the years. We want to meet every expectation of the cabin owners. I love the partnership work between Falls Creek and cabin owners. There is nothing like it anywhere else. It’s a partnership that’s been born over time. I love it and I want to enhance it.

“I’m also looking forward to all other aspects of being the director, like experiencing CrossTimbers up close. How cool is it that I will get to be a part of that?” Harrison said.

As the 2019 summer youth camps approach, Harrison ensured that he will be a resource to whomever steps into the role as program director.
“I’ve seen Falls Creek from every side—as a camper, a sponsor, a youth pastor taking a group, serving on the BGCO student ministry team and having been program director. Now being director of Conference Centers, I think I have a good understanding of what the campgrounds could do to continue to provide the experience we want children, youth and adults to have when they go to camp,” Harrison said.

Harrison said his most significant memories at Falls Creek over the years are the individual salvation stories told by campers and youth pastors, and is especially proud of the team with which he has worked.

“This doesn’t happen as a result of one person. It’s a team effort by so many people, but the highlight of working in this area is working with Team SKOPOS (BGCO Student Ministry Team). I’ve had the privilege of working with some of the best men and women over the years. We have a tremendous team. I will miss those working relationships greatly.”

As Harrison steps into the role as Conference Centers director, the future is bright for the hallowed campgrounds where thousands flock each summer.

“We want to be like the patient farmer in James 5. We will work the soil in setting the table for all our guests and their events, and then we will wait for the Lord to bring the refreshing rains which brings forth the harvest. After all, these camps and events are what they are because our God is faithful,” Harrison said.