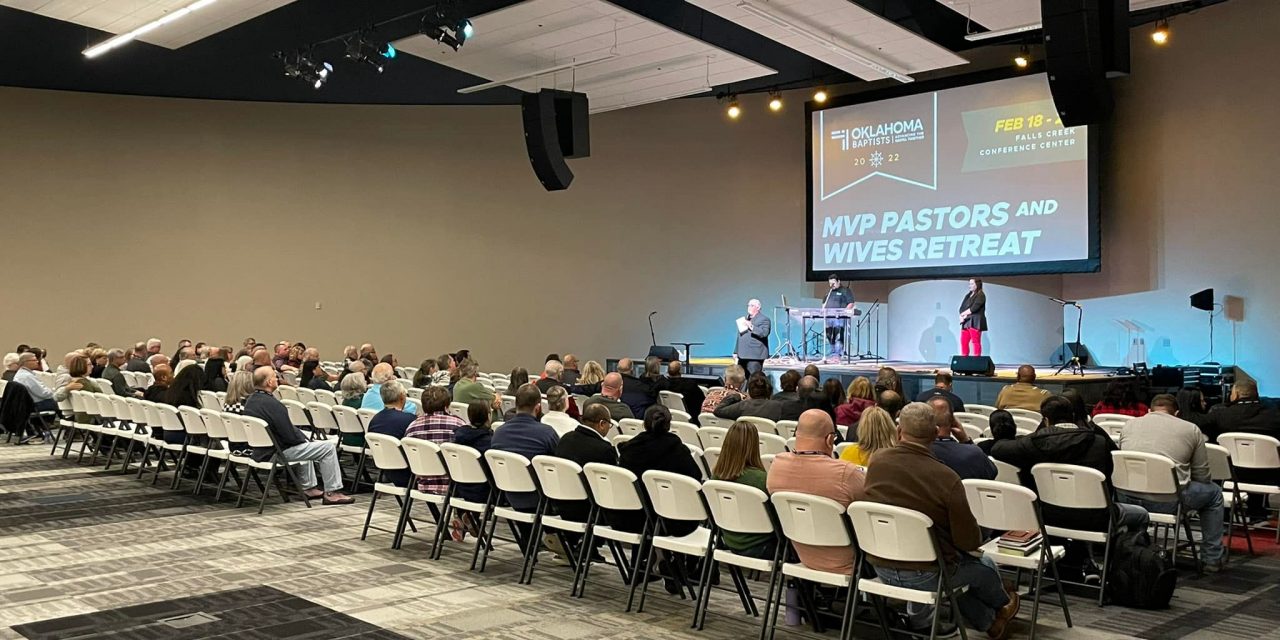 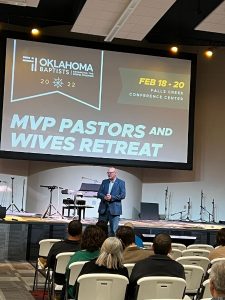 Joe Wright with the Bivocational and Small Church Leadership Network spoke during the MVP Retreat.

More than 170 people were in attendance and enjoyed a full weekend of activities, including hearing a slate of speakers, many of whom are Oklahoma Baptist leaders.

“About to speak at the annual multi-vocational pastors retreat here at Falls Creek,” Todd Fisher, executive director-treasurer of Oklahoma Baptists, wrote on Facebook during the MVP retreat. “These pastors are Oklahoma Baptists’ unsung heroes. They faithfully serve some of our smallest churches, the backbone of our convention, putting in long hours with no accolades. We wouldn’t exist without the commitment of these men, their wives, and families.”

This is the third meeting of the MVP retreat at Falls Creek. In 2021, regional retreats for MVPs were offered due to concerns of COVID. Philip Jones, who serves as MVP consultant for Oklahoma Baptists, said everyone was happy to meet again at Falls Creek.

“Overall, they really appreciate the opportunity to be a part of it,” Jones said. “It’s become that event MVP pastors and wives look forward to attending.”

Jones said registration for the retreat opened Jan. 1, and vacancy filled up in two weeks. He said nearly 25 percent of attendees were participating in the MVP retreat for the first time.

“My feeling is we will continue to have the retreat for the foreseeable future,” he said.

The MVP Retreat began Friday night, Feb. 18 with a dinner. Xavier Abraham, music minister at Lawton, First, and his wife April opened an evening program with leading worship through music. Fisher was the first speaker for the weekend.

Saturday afternoon was a free time for retreat attendees. Jones said the pastors’ wives enjoyed a spa treatment that was organized by Robin Bowen, wife of Tim Bowen who serves as director of missions in Bryan Baptist Association.

Jones said many of the retreat attendees enjoyed a time of fellowship after the Saturday evening session. “The retreat offers these pastors and their wives the chance to make friends, and they encourage each other,” he said.

Sunday morning, Feb. 20, brought the conclusion of the retreat. Wright gave the final sermon of the event. Wright also shared his appreciation for him and Pennie speaking at the MVP Retreat.

“We want to thank the wonderful pastors, wives and (Oklahoma Baptists) for the opportunity to worship, encourage and speak together about Jesus Christ,” Joe Wright said in a message on the bscln.net website. “What a blessing to discover new brothers and sisters and see our faith family grow together.”