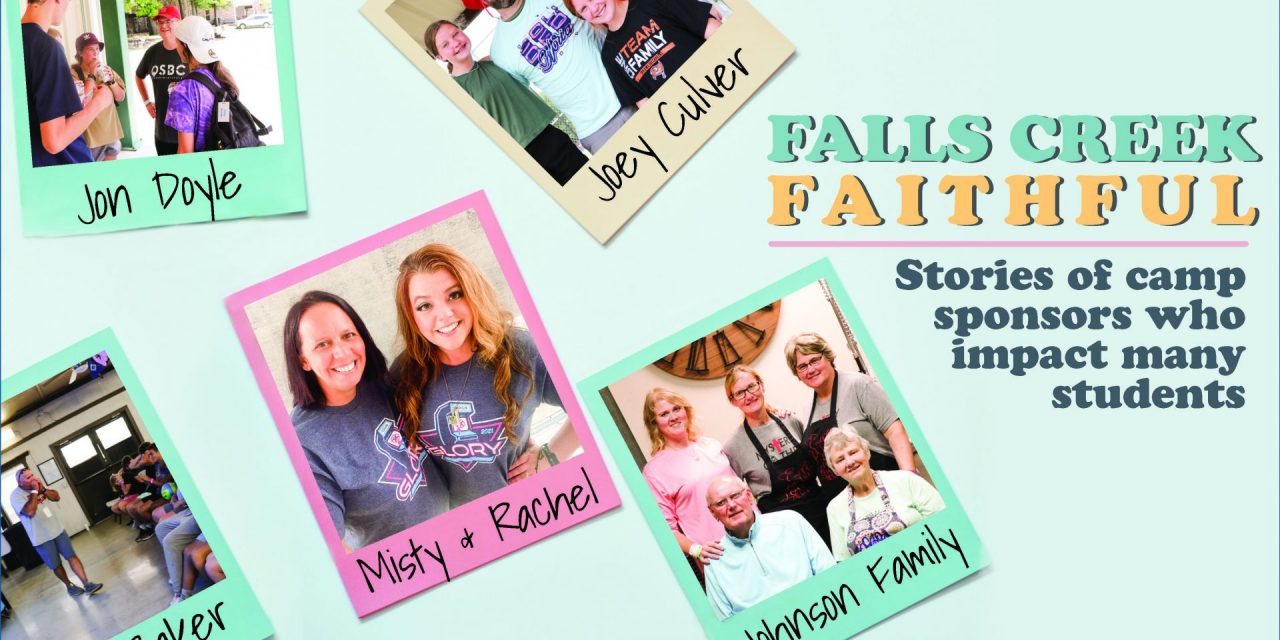 DAVIS—They take time off every year to spend a week with teenagers. They may not get much sleep while experiencing moments of loud conversations, silly games and varying emotions. But these people know how important these times can be for campers attending the summer youth weeks at Falls Creek Conference Center.

Adult sponsors are considered the backbone of the operation of each Oklahoma Baptist church that sends students to Falls Creek. Though this article highlights a portion of the many who have served in this role over the years, the purpose is to show appreciation for everyone who has taken the responsibility to serve and make an impact on Falls Creek campers. 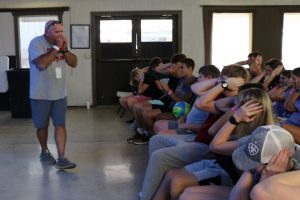 “Doug is your dream camp sponsor because there is nothing he isn’t willing to do,” Easom said. “Even though he is the ‘veteran sponsor,’ he isn’t above taking on any role to serve our students, and I am blessed to have him on my team.”

Baker said he did not have the chance to come to Falls Creek as a youth, but he loves every experience he has had at the encampment.

“It’s a great place to be,” he said. “I’ve probably learned more about growing in my spiritual life here at Falls Creek than anywhere else. It’s just a great atmosphere to get away and recharge.”

With many years as a Falls Creek sponsor, Baker has been with previous campers who are now parents of current campers. It’s through those longtime relationships he is able to encourage these parents to have their kids come to Falls Creek.

“I try to be available,” Baker said. “At Falls Creek, we are on common ground because we are walking everywhere with them and working KP duty with them, and from there, they see they can come to us with whatever the Lord is doing in their lives.”

Baker also has a special tradition of how to wake up campers.

“Doug is known for his ‘insanely good harmonica skills,’” Easom shared jokingly. “It’s his special way of waking the students every single morning of camp. They love it (not really).”

Baker said he plays a rendition of a former Falls Creek favorite “We Are Standing on Holy Ground” every morning at camp.

Though the campers may not enjoy Baker’s harmonica playing—or at least the timing of when he plays—it is obvious he cherishes Falls Creek as holy ground.

Six years ago, Sand Springs, Angus did not have a youth pastor, but that did not stop Misty Poletek from making sure students attended Falls Creek that summer. 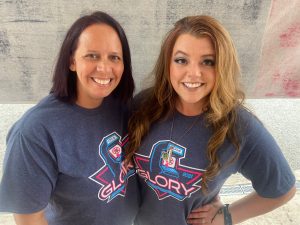 “Because we lost our youth pastor, I went to our senior pastor and said that I’ll do whatever needs to be done to step up and be an extra adult,” Poletek said. “In my mind, that’s all it was going to be until we got a youth pastor.”

That summer, 10 students from Angus Church attended Falls Creek, and it was Poletek’s first time to attend as a sponsor.

“It was amazing to watch the kids come together,” she said about her first time to lead a group at Falls Creek.

Jared Jackson now serves as the youth pastor at Angus Church and knows about Poletek’s influence on the students.

“Our youth group is better because of Misty Poletek,” Jackson said. “She is now faithfully discipling students, leading small groups and is a vital part of what we do at camp each year.”

Poletek grew up attending Angus Church. This is the church where she made her profession of faith in Christ, was baptized and now sees her family grow in Christ. Two of her children have graduated and are committed to serving in ministry.

“I like investing in the lives in students,” Poletek said. “At camp, this is where it seems they have the realization of how God is working in their lives.”

Jackson also appreciates how his wife Rachel has been involved with the student ministry at Agnus Church.

“Every summer, I can count on her to be there by my side as we point students toward Jesus,” he said. “She has done it all, helped cook, led small groups, led worship, taught lessons.”

Rachel is also involved in designing the camp shirts, as well as the stage set in their cabin. With her multimedia talents, she creates the video presentations that are shown during the church service after camp.

“I’ve never seen another set of church leaders who are more committed to discipleship like Jared and Rachel are,” Poletek said about the Jacksons.

Since taking 10 students six years ago, Angus Church grew to taking 50 students to Falls Creek in 2019. This year, among the many spiritual decisions Angus Church students made at camp, one student made a profession of faith in Christ after the bus broke down on the way to Falls Creek (They made it safely to camp).

Bill and Carolyn Johnson have faithfully served as Falls Creek sponsors for 26 years with Walters, First. 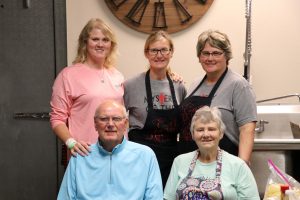 A family of sponsors, Bill and Carolyn Johnson, front, with their daughters, from left, Kelly McDowell, Jennifer Farris and Denise Hiebert.

“They were sponsors and on kitchen staff when I was a youth at the very same church from 1998 to 2001,” said Cody Pennington who now serves as youth pastor at Walters, First.

Bill and Carolyn’s three daughters are now serving as Falls Creek sponsors, too. Denise Hiebert, Jennifer Farris and Kelly McDowell have joined their parents in making an impact on Falls Creek campers.

“It’s a family tradition,” Pennington said. “I have many great sponsors, but Falls Creek for Walters, First is made sweeter with Bill and Carolyn.”

Even though his girls are no longer Falls Creek campers, Bill knows how important Falls Creek is.

“Falls Creek is one of the greatest ministries I have ever been around,” Bill said. “Just to see the Spirit of God move here and just to come see (his family) serve God. They serve in our local church too, but it’s really unique when they come for a week. It’s a special blessing see them working together, loving these kids, serving with their mother is just special. We’ve always been a close family, and this is just another phase that we get to share ministry together.”

As a student and now serving in youth ministry at Walters, First, Pennington has always appreciated the Johnsons being involved as Falls Creek sponsors and their influence on campers.

“Christ oozes out of everything their family does,” Pennington said, “and I was fortunate to grow up around them, witness their involvement all these years, and now I get to serve alongside them.”

Oklahoma City, Quail Springs needed another male sponsor for the children going this summer to CrossTimbers Children’s Mission Adventure Camp. Though he also committed to be a sponsor at Falls Creek, Jon Doyle took on the extra duty, even though his kids no longer attend CrossTimbers. 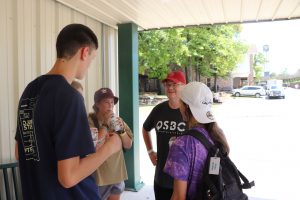 Jon Doyle, center, enjoys going to both Falls Creek and CrossTimbers as a sponsor.

“Jon’s children are all teenagers,” said Mark Jones, children’s pastor at Oklahoma City, Quail Springs, “and yet he chooses to be a part of the children’s camp because he has made an investment in the boys and girls who are here. He’s not going to stop. He’s going to keep investing in them and sharing Christ with them.”

On Sunday mornings, Doyle and his wife Lisa teach a fourth grade class at Quail Springs. On Wednesday nights, he helps with junior high students at church. This is how he has a regular connection with both the children and student ministries.

“Jon has been a stable presence in our student ministry,” said Dylan Bone, student pastor at Quail Springs. “He’s been at Falls Creek every year. He leads the games on Wednesday night, and whenever he steps up on stage, the kids erupt because they know they’re going to do something fun.”

Bone described a time when Doyle got to share his heart with the students. They listened intently to what Doyle had to say because of the connection he had with them.

“He’s got so much love for these kids, and it’s great to see how they respond to him,” Bone said. “They want to talk to him. They want to be in his small group. But what was really cool is we had some first-time sponsors with us, and they saw the connection Jon had with the students. They decided right then they wanted that same kind of connection. He’s a great example.”

“I love both camps,” Doyle said when asking why he participates in both Falls Creek and CrossTimbers. “They are different experiences, but I enjoy interacting with both groups and watching the campers enjoy what both camps offer.” 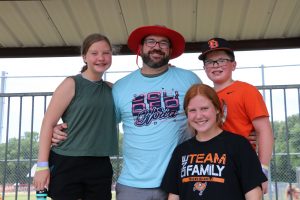 Joey Culver, center, is loved by campers of both Falls Creek and CrossTimbers.

Joey Culver had a similar involvement as a double-duty camp sponsor with Blackwell, Immanuel, but he did not get much of a break in between camps. Immanuel was at Falls Creek July 12-16 and turned around the following week to send children to CrossTimbers July 19-22.

“I take lots of caffeine,” Culver said jokingly. “It’s a ministry to me. Just like I saw the people in my life taking the time to invest in me, I saw the need to invest in young people as well. By the end of CrossTimbers, I’m dragging, but I’m not doing it for me. I’m doing it for them. I get a lot out of it, but it’s about encouraging them to have a growing relationship with Christ.”

Culver has been a member at Immanuel for the past 11 years, and he has been going to both camps with the church for quite a few years. He has been there with many campers who make that transition from attending CrossTimbers to going to Falls Creek.

“Joey is really loud and fun,” said Sam Simmons, associate pastor of student ministry at Immanuel. “Kids take to his personality easily. I can give Joey any task with the kids and be 100 percent confident, it will be done in a way that Christ is honored.”

Many can read about these faithful servants and identify someone similar with other church groups. This is how the Lord works throughout Oklahoma Baptist churches. He not only prepares the hearts of campers, He also provides those who can be there when campers make those life changing decisions that are made every summer.