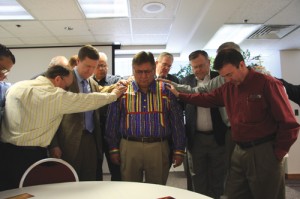 Emerson Falls, pastor of Oklahoma City, Glorieta, and president of the Baptist General Convention of Oklahoma, cautioned the staff of the BGCO Feb. 18 about the “Dangers of Ministry” during its monthly “At Home Day” meeting.

The day’s activities centered around ministry to Native Americans and also featured worship led by members of Glorieta church, a presentation by Paul Maxey, pastor of Tuskegee Church in Muscogee-Seminole-Wichita Association, titled “The Muskoke People—A Cursory Survey,” and a panel discussion about ministry to Native Americans led by Falls, Maxey and Gary Hawkins, associate in the BGCO church planting group.

“We live in a serious age. I’m afraid we’re only two generations away from losing Christianity in this country,” Falls cautioned. “Is that because of ignorance or apathy? We must be diligent. We can miss what God is doing if we’re not careful. I want to alert us to what I call the dangers of ministry.”

Falls said ministry can become dangerous when it “becomes an educated ritual.”

“We can become so professional that we miss God,” he said. I’m afraid we miss the relationship that comes with serving God. Sometimes, we focus on the form and miss the substance.”

Second, he said, “ministry can become an exclusive refuge.” 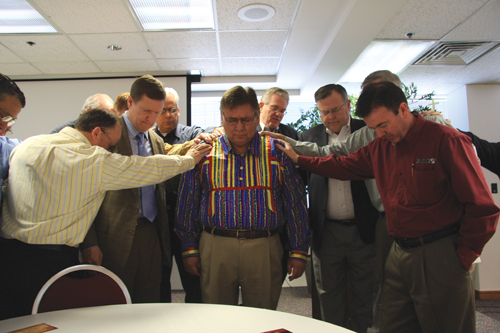 He said many times, those in ministry become so focused, they almost declare to God that they can’t do other things and shout, “God, leave me alone!”

He pointed out that Oklahoma is changing, especially culturally.

“Oklahoma is becoming brown—ethnically,” he declared, referring to the growing number of Hispanics in the state. “Of course they’re different from us. We must be cross-cultural; if we don’t, we’ll lose them.”

There also are generational differences to contend with, Falls pointed out.

“The younger generation doesn’t want to learn about God, they want to experience God,” he stressed. “As a pastor, they don’t want me to follow an educational model or be a CEO who plans and holds meetings. I need to be a Christian Shaman, if you will, who can get them connected to God.”

Finally, Falls said, ministry can become “an empty routine” and stagnate into an “I’ve always done it this way” process if we’re not careful.

He said happenings such as the terrorist attacks on the World Trade Center and the Pentagon in 2001 made church attendance spike for a few weeks, only to rapidly decline again.

“That made us mad as a nation, but it didn’t make us desperate,” he proclaimed. “And, things probably won’t get better anytime soon,” he said, referring to the current economic decline.

“I don’t like an economic recession, but if God is doing it to make us desperate—let it happen!”

During the panel discussion, it was pointed out that most Native Americans now reside in urban areas, instead of on “reservations.” Many are second and third generation “urbanites.”

“We are seeing a Pan Indian culture—a blending of Indians who do not speak their tribal language and whose tribal distinctions are not as strong,” Falls said. “They identify themselves generally as Native American. We need to do more in the urban areas to reach the Native American culture there.”

Hawkins said the BGCO is exploring new ways to reach the urban Native Americans but said the task is daunting.

He quoted Native American activist Russell Means, who said, “our greatest enemy is Christians, because they commit cultural genocide.”

“For many Indians, it (Being saved) is a choice between being Indian and being Christian,” Hawkins said.

Acknowledging that Native American life focuses on the family, Falls said, “We’re a family and clan culture. Native people are receptive to the Gospel when it’s presented in the right way. We’ve just got to stop making cultural mistakes when we do it.”