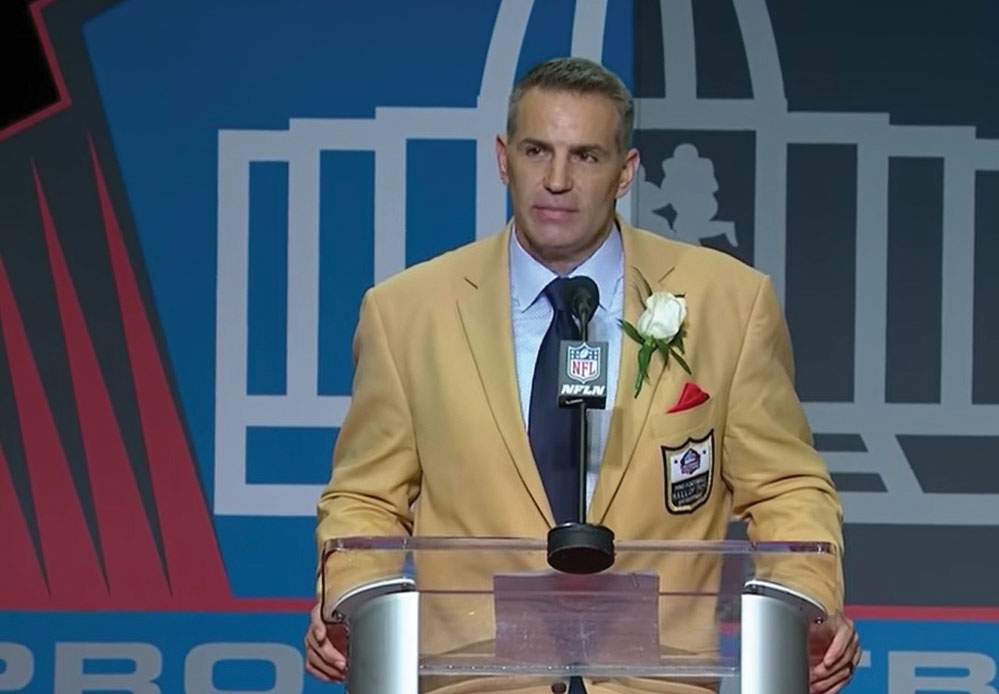 NASHVILLE (BP)—Kurt Warner’s faith in Jesus Christ is more than a personal, off-the-field commitment that had little impact on his success as an NFL quarterback.

That’s the conclusion reached by Dan Bickley, a sports columnist for azcentral.com, as he wrote about the former Arizona Cardinal who was inducted into the Pro Football Hall of Fame Aug. 5 in Canton, Ohio.

Warner played 12 seasons in the NFL for the St. Louis Rams, New York Giants and Cardinals, appearing in three Super Bowls and winning one.

“He was one of the best clutch performers in history partly because he wasn’t suffocated by external pressure, the need for individual achievement or the fear of criticism,” Bickley wrote of Warner. “He always believed he was serving a higher purpose, where success and failure were equal tests of his character. He was liberated from performance anxiety on the football field because he never believed he was serving himself.”

Warner would undoubtedly agree with that analysis. In his half-hour speech at the induction ceremony, wearing the traditional gold jacket given to Hall of Fame inductees, Warner recounted his unlikely and unorthodox journey to NFL stardom after a collegiate career at Northern Iowa University. He went undrafted in 1994, and the Green Bay Packers cut him after a brief tryout. His rise from stocking shelves at a grocery store in Iowa to starring for the St. Louis Rams in 1999 has been well documented.

In the Rams’ Super Bowl win in 2000, Warner connected with wide receiver Isaac Bruce for a game-winning touchdown with less than two minutes remaining. Warner won the game’s MVP award after throwing for a Super Bowl-record 414 yards and made a strong statement about his faith in a post-game interview with Mike Tirico.

“Well, first things first, I’ve got to thank my Lord and Savior up above,” Warner replied. “Thank you, Jesus!”

That exchange proved to be a defining one for Warner, who referenced it at the conclusion of his induction speech.

“Many felt I was thanking Him for orchestrating a Super Bowl win, or making my passes fly straighter, or causing my opponents to make more mistakes,” Warner said. “But those people had it all wrong.”

Instead, Warner said, that gesture was his way of expressing gratitude for all that Jesus had done for him.

“Now, love it or hate it, that opening scene captured the imagination of the sports world, and the words became the heart of my story,” Warner said. “The rest, as they say, is history, bringing us to this: The famous last words, and the only place this extraordinary journey can end.

“His final moment was for me,” Warner told the crowd. “Mine is for Him. Thank you, Jesus!”

As with most Hall of Fame speeches, Warner expressed gratitude to those who had been instrumental in his development as a player and as a person.

He lauded his father, Gene Warner, for his selflessness and willingness to give of his time to spend time with his son. He praised his mother Sue for her guidance and wisdom. During college, when Warner was sitting on the bench instead of playing, he told his mom he was thinking about transferring schools or quitting football altogether.

“She told me to be grateful for my opportunity, even if it didn’t look like I wanted it to look,” Warner said. “To never stop working or preparing, because God had a plan and I needed to be ready when he showed it to me. And lastly, that I wasn’t a quitter, and we would get through this together.”

Warner thanked his kids and his wife Brenda for their support and love for him throughout his career. He also expressed his gratitude to Trent Green, whose injury as the St. Louis Rams quarterback opened the door for Warner. He played so well when given the opportunity that Green, a fine quarterback in his own right, never got his starting job back.

Warner won the MVP award that year, throwing a league-high 41 touchdowns (at the time the third most in NFL history), passing for 4,353 yards and leading the Rams to the Super Bowl win over the Tennessee Titans.

Though football is a team game and Warner said he wasn’t one for singling guys out, he recognized Green specifically for the impact he had on Warner’s career.

“Our paths crossed in the most incredible of ways, and I acknowledge, you could easily be the one standing up here tonight,” Warner said. “But the class that you showed while dealing with the toughest of situations is etched in my mind. Your willingness to share your football secrets so I could succeed was incredibly valuable.

“But the character displayed and the way you modeled the definition of teammate was priceless. Those lessons followed me the rest of my career. Thanks for sharpening my character with your own.”

In his column about Warner, Bickley wrote that Warner was not a gift from the football gods but a great player who made his own magic and proved his worth when given the opportunity.

“He just happened to be a better person,” Bickley wrote. “That’s the fairy tale, the glass slipper, the pot at the end of the rainbow. And why few athletes will ever look better wearing a gold jacket.”