Faith after the flooding: 13 professions of faith after DR serves in Nebraska 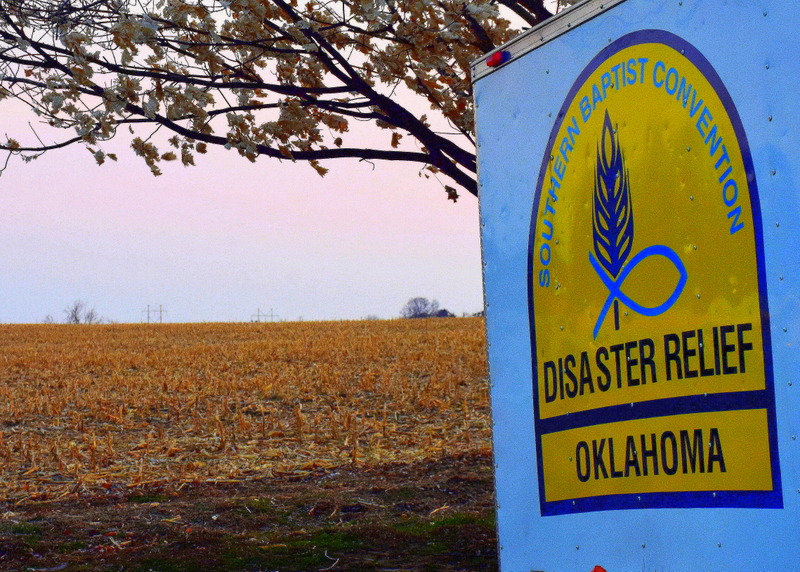 BELLEVUE, Neb.,–From the time Oklahoma Baptist Disaster Relief was called upon to help after flooding across the state of Nebraska, volunteers served for six weeks total. 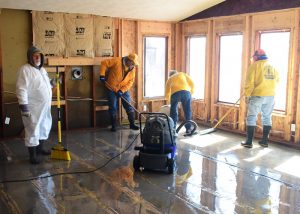 Trained and equipped volunteers on a mudout crew.

For the duration of the six weeks, 171 Oklahoma Baptist trained and equipped volunteers served 130 homeowners that were affected by flood waters.

Of the 130 homes, 13 homeowners prayed and made professions of faith in Christ. Several homeowners later sent letters of appreciation to DR including the Cobb family saying, “You have truly blessed my family more than I know how to express. Your loving generosity of your time, talent and faith has brought great relief, encouragement and inspired us. We thank you and pray God’s blessings on you always.” 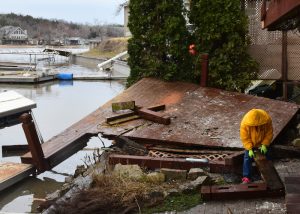 A deck after DR cleaned up debris from flood waters.

The Taylor family said, “I will never be able to thank your organization sufficiently for all the assistance provided. Your people are wonderful examples of God’s grace to His children at a time of great need. It was a huge encouragement to me and helped restore my soul and faith in God and mankind. I am very confident there is no other godly organization on earth that surpasses the Southern Baptist Disaster Relief in evangelism and spreading God’s grace and love.”

Another family sent a letter saying, “How do we say ‘Thank You’ to such a wonderful group? They have all returned to their homes in Oklahoma, we hope safely, ready to offer their assistance when called upon. The signed Bible presented to us by the group will always remind us of those wonderful folks and will be cherished by us.”

Don Williams, state director of Oklahoma Baptist DR, said in one home, “There was mud covering up to your ankles, and damage through the rafters of the ceiling at their house.” 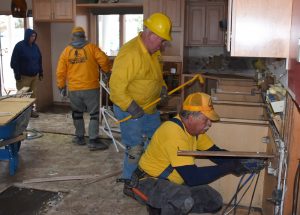 Trained and equipped volunteers working on cabinetry that was damaged by flood waters.

The home belonged to a young family. The husband was in the police academy and the wife stayed home with their one-year-old son. The local police chaplain had not previously done much work within the department the husband of the affected home would work.

However, once the police chief heard that Oklahoma Baptists were doing mudout work on some of his officer’s homes, a new door for ministry was opened. The wife later made a profession of faith in Christ.

When DR came back weeks later to check on families whom they had served, Williams said, “She was excited to share with the chaplain not only what physically happened to repair their home, but what spiritually had happened to her life.”

While DR served in Bellevue, LifeSpring church hosted the trained and equipped volunteers. “They were great hosts,” Williams said, “They helped us, encouraged us, brought food and water and were very accommodating for all six weeks.”

DR completed work in Nebraska on May 11 and stands ready to serve wherever they are called upon. For more information about Oklahoma Baptist Disaster Relief or to make a tax-deductible donation, visit www.okdisasterhelp.org.