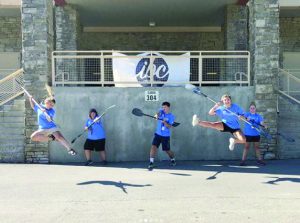 DAVIS—As campers come and go on the Falls Creek Baptist Conference Center campgrounds for eight weeks out of the summer, one group of people remains constant. That group is the Falls Creek summer staff.

This group of college-age students work alongside Baptist General Convention of Oklahoma staff each summer to ensure that each camper who visits the hallowed campgrounds is presented with the Gospel and has the best camp experience possible.

Each summer staff member has a unique story of their own, coming from different backgrounds and all walks of life. The staff was challenged this summer to have a Gospel conversation in which they share their testimony with as many campers as possible, and the results have been more than anyone could have imagined.

Jacob Cooke is one such staff member who is serving at Falls Creek for the first time this summer. Cooke had a complicated life growing up, moving frequently and dealing with family members who struggled with addiction.

“God has definitely delivered me out of a lot of situations,” Cooke said about his childhood.

“We started moving around a lot because my mom had a drug problem and bad taste in men. The pinnacle of all of that came my sophomore year of high school when my mom’s drug problem got worse, and she was in an abusive relationship, so I moved back in with my dad.”

Cooke recalled this time of his life with great pain in his voice. While he had lived with his mother, Cooke found out his dad’s alcoholism became worse, making for a toxic living environment. After his many different living scenarios fell through, Cooke’s life took a turn for the better when he moved in with an uncle who was a believer in Christ.

At this point in his life, Cooke had been to 17 different schools. An agreement Cooke and his uncle made was that if he were to live with him, he would attend church with their family. Cooke happily agreed. Soon after, Cooke experienced a heart change. 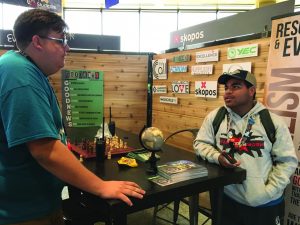 “One Sunday, we went to church, and while everyone else was worshipping, I didn’t understand why what I was doing seemed to feel different than what they were doing. I wasn’t happy like they were. Worship wasn’t bringing me any peace,” Cooke said. “I realized that I didn’t have a relationship with God, and so I began to talk to Him and said, ‘God I’ve been putting my faith in the wrong people all of my life, and I want to put my faith in you. I want you to lead my life.”

Cooke made a profession of faith in Christ and was discipled by his youth pastor. “I noticed that I had a heart change toward my parents. I wasn’t angry with them anymore,” he said. Later, Cooke felt the Lord calling him to a life in ministry, and his youth pastor directed him toward Oklahoma Baptist University (OBU).

Through OBU, Cooke was presented with the opportunity to work at Falls Creek, a camp he had never heard of prior to moving to Oklahoma from Texas. Cooke is now on the program staff at Falls Creek, where he has shared his salvation story with many campers, helping one camper make a profession of faith in Christ during week three of camp.

There are many summer staff workers who have impactful testimonies. Some have made professions of faith in Christ at Falls Creek as a camper, like Zack.

Zack is a lifeguard for the third year at Falls Creek this summer. “I began my relationship with Christ at Falls Creek, so I started working here so I could have the ability to help kids have the same experience,” he said.

Zack can be found working on “Baptist Lake.”

For four summers now, Leah has served at Falls Creek in the gift shop. “In 2012, a gift shop girl shared Christ with me and inspired me to be a staffer myself one day,” she said. “I love being in the gift shop because I get to be so intentional with the students and remind them how it’s all about Christ and not ourselves. Plus, pins. That’s a ministry in and of itself.” 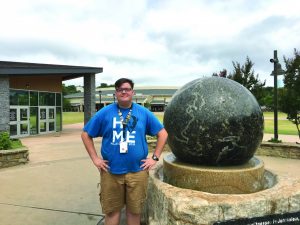 Jacob Cooke behind the Missions Center [Photo by Chris Forbes]

One such place where a camper can receive a pin is at the Wynn Center for World Missions, where Cooke works as well as Kayla who also can be found in the Missions Village or managing the stage in the R.A. Young Tabernacle. She has served at Falls Creek for two summers. “I’ve been coming since I was 12 years old. I’ve never missed a year! I’ve always wanted to be on staff since I started going here. I feel like it’s a privilege to be used by God to serve here,” Kayla said.

On staff for his first summer is Ben, serving at the Falls Creek front gate. Ben said that he found himself trying to decide between going on a mission trip for the summer and working, and thought Falls Creek was a good mixture of both of those things he felt called to do.

Nick, a third-year member of the media team, can often be found on a golf cart driving around the Falls Creek grounds, gathering footage for the popular videos shown each night at the evening tabernacle worship service. Nick said one of his favorite things about working at Falls Creek is, “I get the opportunity to talk to hundreds of kids about Jesus and see how He has changed their lives. It’s the best!”

A time many enjoy while at camp for the week is recreation time. That is where Elizabeth serves on recreation staff at the volleyball and softball fields. Elizabeth’s advice for campers is, “Be sure to visit the old prayer garden over the lake sometime. It’s my favorite place on campus to be with the Lord.” She also joked, “Oh, and don’t slide into home plate. It’s only church camp.”

Another popular activity at Falls Creek is the ropes course in the open air amphitheater. That is where one can find Emily, who has served on the ropes course team for three years. Other summer staff members include Mitch who has served on the courtesy team for four years, and Hunter, who is the resident “Coffee Queen” in the new 1917 Café on Centennial Plaza, where campers can come for refreshments.

As thousands of students and adults visit Falls Creek Baptist Conference centers each summer, it takes a village to ensure that each camper has the best possible experience, one where they can encounter the Lord.

Those interested in applying to work at Falls Creek, can find a list of requirements and more at www.skopos.org/fallscreek/staff.