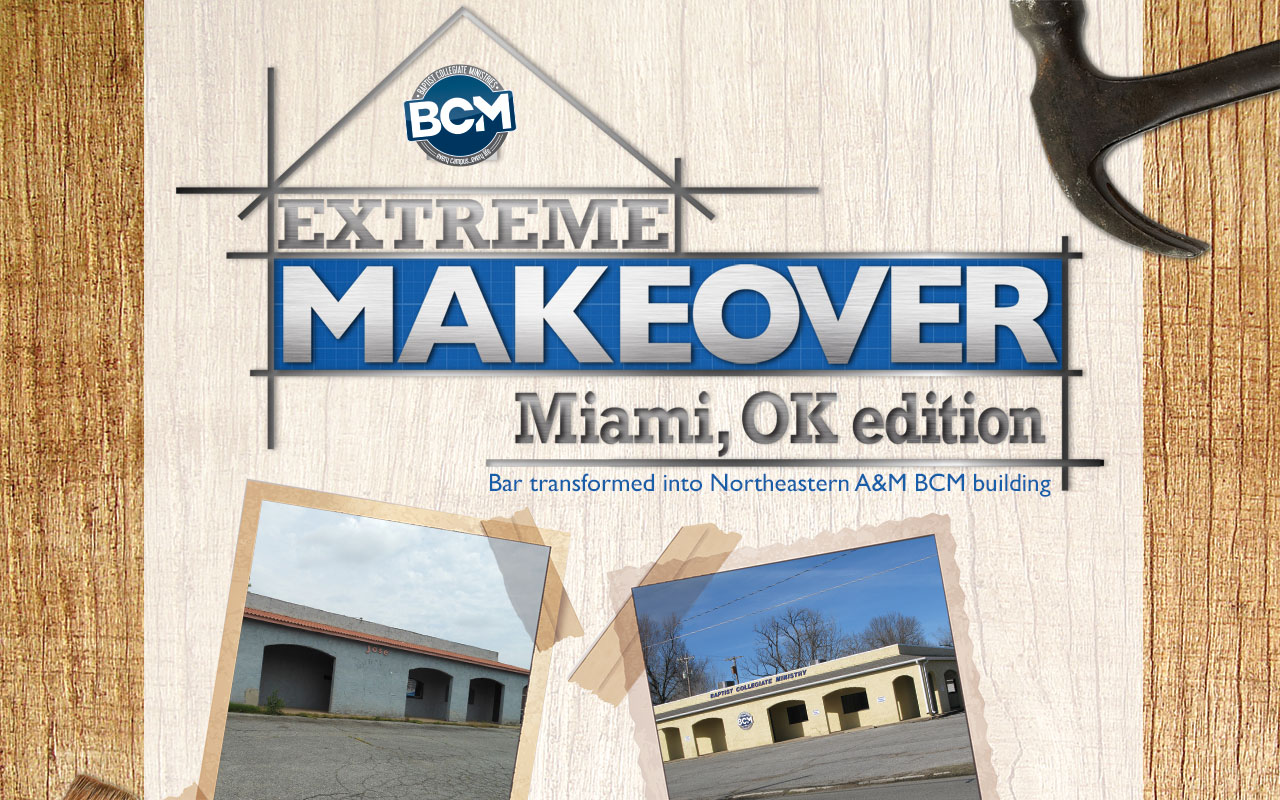 MIAMI—Some of the most popular television shows involve structure remodeling. HGTV alone features more than 200 shows involving building improvement, so for those who are drawn to such “design drama,” here is a story that offers more than curb appeal or “flipping flair.”

The Baptist Collegiate Ministries (BCM) at Northeastern Oklahoma A&M (NEO) has a new building on the south end of the college campus. Kimily Waldron, BCM director at NEO, thought the building was at a perfect location for connecting with students since it was closer to the dorms.

“We’re a two-year school that has about 600 kids living on campus, and they’re all on the south side of the campus,” said Waldron who is in her fourth year of her second stint at NEO (previously served the school from 1999-2005). “The building sits on the main street which goes to the high school, so the high school students drive by on their way to school. Location is key. There are only two entrances to NEO, and we’re on one of them.”

There is one glaring aspect to this building. It used to be a bar, one that held a rough reputation.

“I’ve heard it called the local watering hole,” Waldron said. “I’ve heard it called an eye sore. I’ve had reputable people tell me, apologetically, they have gone in there and spent time in there. I tell them I don’t judge anybody. But I just felt like this is what the Lord wanted us to do to get rid of (its bar reputation) and make it something useful. Everybody has been so supportive of that, including the lady who sold it to us.”

The seller inherited the bar, Waldron said, along with its burdens including law suits from past incidences that were resolved in litigation. But the previous owner was ready and willing to sell.

NEO also was willing to buy the BCM’s original building that was dedicated in 1961. According to the Miami News-Record, this building now houses the school’s department of public safety.

Waldron was excited with how well the transaction proposals were developing between the former owner of the bar, NEO and the BCM and with Northeastern Association, which actually owns the BCM building.

“God built many great relationships because of (these transactions),” said Waldron.

This has been a dream even before Waldron returned to NEO where, as a Miami native, she also attended as a student. Waldron recalls her first tour of the bar when the idea of making it a BCM meeting place was becoming a reality.

“It smelt, looked like and ‘all the above’ of a real life bar,” she said. “But I just knew this was something God wanted us to do. There was no doubt in my mind. It was the right size. It was the right location. And I knew God could do it. I knew it would take money to remodel it, and I knew the churches had to be behind this.”

With the help of Wayne Wall, director of missions in Northeastern Association, leading the association to a vote of approval for the purchase and remodeling, BCM had a new meeting place for NEO students, but there was a lot of work still to be done.

After two and a half years committed to fixing up the place, BCM had a dedication ceremony on Jan. 12. Many pastors, church leaders from Northeastern Association and Baptist General Convention of Oklahoma leadership, including Anthony Jordan, executive director-treasurer, and Cris Lowery, collegiate ministries specialist, attended.

The building did have an extreme makeover, but there was one item that remained—the actual bar stand. Waldron wanted it to stay for a special reason.

“I see it as a spiritual marker,” she said. “I see it as a novelty. It might draw some students in because it was interesting because, ‘why would a campus ministry keep a bar?’ I felt like it could be used for so many examples of what the world has to offer. So many bars have destroyed many young people’s lives, but we have the opportunity to explain that God can change their life completely. We see this building as a place where young people can be discipled and be told about the love of Christ.”

Waldron said many have been impressed with the “extreme makeover,” how nice the remodeling efforts are. She also said NEO has been supportive of the whole endeavor.

“The (Miami) community has seen the change,” Waldron said, recalling some incidences that happened in the past. “A first responder told me he had to go to the bar because of a stabbing. There was drug usage in the bar. I know there’s been horrible things associated with that bar. And I think as time goes on, people see us as bringing ‘salt and light’ to the campus in a way that has not been seen on that corner for a very long time.”

The new BCM building will be used for weekly meetings, including luncheons, Bible studies, worship and for providing a regular place for NEO students to gather. Lowery said it could be used for events like watch parties for Oklahoma City Thunder basketball games.

“One of the things that is happening now is campus areas are not used much anymore,” said Lowery. “Students now have game consoles in their rooms. Being able to create an event where people come together for a common purpose, even if it’s just to watch a Thunder game, creates something that’s not happening a lot on campuses.”

Since the building’s opening happened at the beginning of the spring semester, Waldron said the BCM will have a gradual impact.

“I see this semester as a transition for us because I don’t want it to be just about the building,” she said. “It’s always been about the lives of students.”

Lowery also is encouraged about how this “extreme makeover” will have an impact on NEO students.

“God has done a lot to fulfill this vision,” Lowery said. “He’s done all that with the facilities, so I can’t imagine that He won’t do the same thing with bringing students there.”

Both Lowery and Waldron were extremely thankful for Northeastern Association and the churches for making the new BCM building a reality.

“I am very appreciative of the churches because it is the local church that has supported this and made this possible,” said Waldron.

“The association carried the burden. It’s their building,” said Lowery. “They have done a great job.”

A bar was converted into a building for making disciples. This “extreme makeover” isn’t just a structural segue. It is an example of how the former things of life are gone and new life has come (II Cor. 5:17).