Every Day With Jesus Is Sweet For Holden 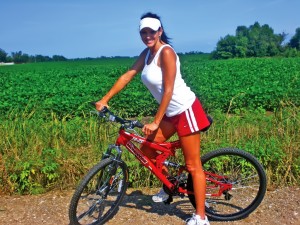 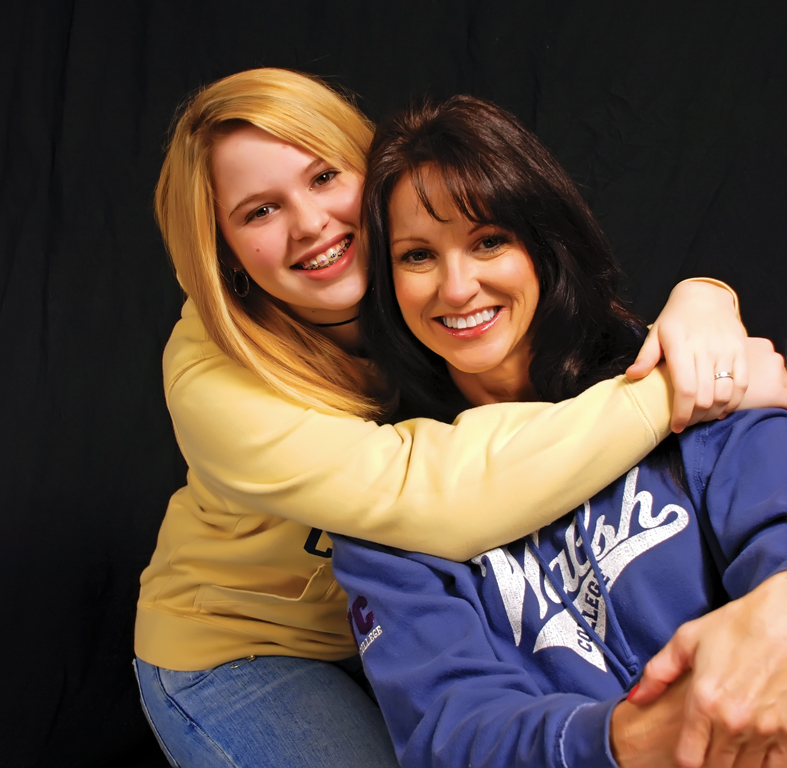 MIAMI- To look at Kerry Holden, one wouldn’t suspect she is anything but a vivacious, 48-year-old mother experiencing the normal apprehensions of home-schooling a 16-year-old daughter who’s anxiously waiting to get her driver’s license.

But, beneath the trim figure of this “workout-a-holic” who rides her bicycle six miles a day religiously, is the body of a woman who was told eight years ago to basically make herself as comfortable as she could as death approached.

Holden was an energetic, active 17-year-old in 1977 when she began to have problems with her sight. Three doctors told her she had damaged her eyes from extreme exposure to the Sun from working as a lifeguard.

“But, I knew it was something more,” Holden said. “I had lost 20 pounds suddenly. Then tests revealed I was a Type I Diabetic.”

Holden’s blood glucose level was measured at 850, an astounding figure when one considers the normal range is 75-110. Sent home with Insulin and a needle, she eventually went into Insulin shock.

“I was in the fetal position for almost two weeks,” she recalled. “My father, Carl Holden, was a full-time evangelist at the time, and there were people in churches all over the United States praying for me.”

“I have a very challenging diabetes,” she said. “Two of my specialists said they’d never seen anyone like this. “My blood sugar can go from 20 to 500 in a day, but the Lord has blessed me in that I never have gone into a coma. He’s always been there. I’ve always been able to treat it when I need it.”

Holden treated her diabetes with an insulin pump for seven years before doctors had to remove it because of scar tissue build-up in her stomach.

“Now I’m on five shots a day, and I prick my fingers six to 10 times a day to know where my blood sugar is and how much insulin to give myself,” she said. “But the doctors have said that I’m one of their most challenging patients, wouldn’t you know?”

With her diabetes under control, Holden focused on a career of teaching and got married. When she turned 32, she desperately wanted a child because at age 20, she had been advised to wait several years before getting pregnant.

“But I had waited too long,” she rued. “The doctors told me childbirth would kill me or I would die shortly thereafter.”

So, Holden decided to adopt. And God gave her Kambree, an 11-week old baby girl, who has since become the joy of her life. 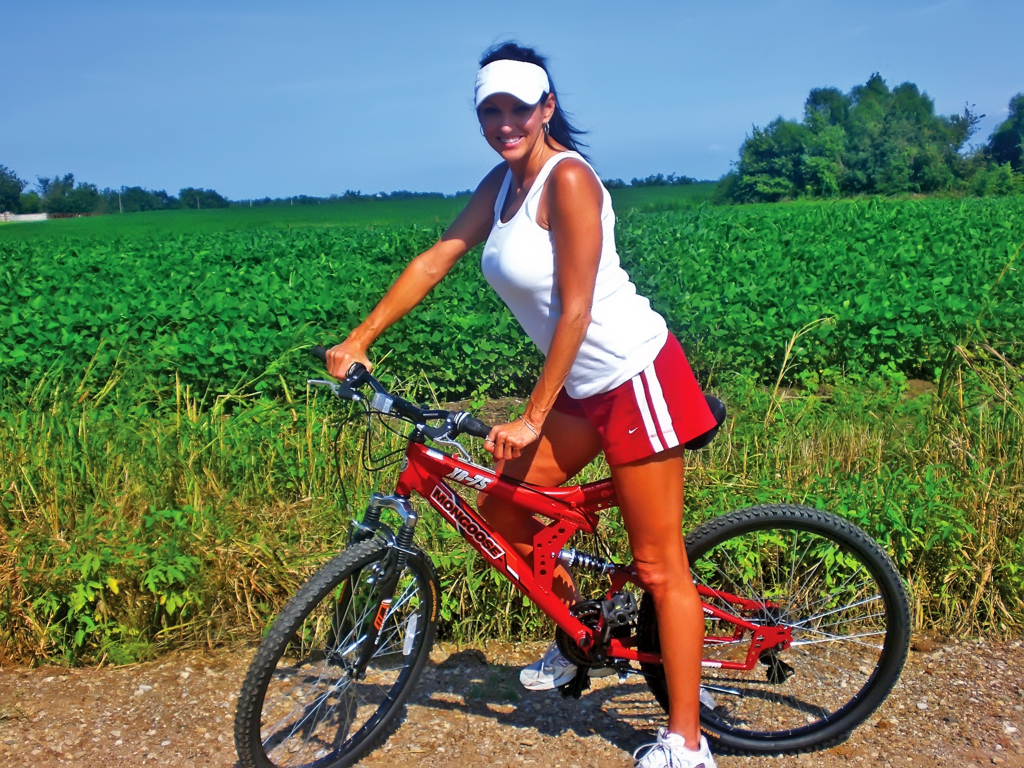 In 2000, Holden’s journey took the near-fatal turn when she began suffering severe chronic nausea and vomiting. Surgeons operated on her esophagus, which failed to remedy the problem.

“That’s when they told me I had gastroparesis (paralysis of the stomach) and there was nothing else they could do, except insert a feeding tube, and diabetics can’t handle a feeding tube because of the infections they would get,” she explained. “So, I was basically told to make myself as comfortable as I could.”

Holden and her husband then moved from Tulsa back to her hometown of Miami, where he had secured a new job.

“I returned to Miami with my dark brown hair turned orange from lack of vitamins and nutrients,” he said. “My body was so skinny and bony. I had lost so much weight that my 7-year old daughter broke one rib just by sitting on me. My husband would break them all the time just by giving me little hugs; not thinking they were too snug.”

The new move also brought new physicians into the picture. One that would prove to be a God-send.

“With my husband’s new employment, we had to go to new doctors and I shared my story with my gastrologist,” she said. “He said there was nothing that could be done and I said, there is something to be done, you’re a doctor and you have different avenues you can take that I could never take. You’ve got someone dying here who isn’t meant to die; I have a daughter to raise and a purpose to live and I can’t accept this.

“I turned around and I was in tears, and he said he had a colleague in Australia who was taking heart pacemakers and implanting the leaders into the stomach wall, and it was helping the body to digest food.”

Holden was the 50th person in the world to have the four-hour gastric pacemaker procedure done when hers was performed at the Kansas City Medical Center.

Through it all, Holden’s faith remained strong.

“Inside, I kept thinking this can’t be happening because I know God is not finished with my life. I knew it from the depths of my heart,” she exclaimed. “I could not understand what was happening. I looked like I was going home to my Savior at any time, but I still knew in my heart it wasn’t my time.”

Although five of those with the pacemaker have since died, and many are still sickly, Holden has done well.

“I’m their poster child, and I say it’s because my Father always finds a way out at the last minute. He always does,” she proclaimed.

“They’re still doing research to find out why this works. But I told them I know why it works. Because, if anything, the Lord knew I needed it at the time.”

She needed it a second time two years later when she fell off a ski boat onto a concrete ramp head first, jarring several bones and breaking a rib.

“A week later, I started vomiting again,” she said. “The fall had pulled a leader off my stomach wall, so they had to re-do that surgery. This time, they placed the pacemaker up higher in my abdomen, so it’s a better fit.”

Unfortunately, her husband had left her three months before the second gastric pacemaker surgery in 2002. That, she admits, “was a really hard situation.”

But, she says God gave her Rev. 3:2 to cling to: “Wake up, and strengthen the things that remain, which were about to die; for I have not found your deeds completed in the sight of My God.”

“That reaffirmed to me that I knew God was telling me my life was not over on this Earth,” she said. “My works here were not completed.”

She didn’t date anyone for five years, “but now God has blessed me with a wonderful boyfriend who reads Scripture to me over the phone every day,” she said.

Holden also focuses on reading Scripture every morning, teaching Kambree and being a doting mother. She is active in Liberty Church in Miami, a congregation her father helped start 31 years ago when he left full-time evangelism, and she also is director of Woman’s Missionary Union in Northeastern Association.

“God has just blessed me so much. He has blessed me with my daughter who encourages me,” she said. “That’s one reason I’m here, and now that she’s getting older, the Lord has opened other ways that He wants me to share my testimony.

“Everywhere you go, someone has a problem, and a lot of times, it’s with illness. I always listen to their story and I tell them, despite their illness, God has a plan for their life. I usually hear, ‘yeah right.’ And I say, no, I know. And that opens up the door.

“I can tell my testimony quickly, or I can take an hour or how ever long they’re interested. It has become such a daily testimony, and I really care for these people. I may have just met them, but I pray hard for them because they have a life to live, and God can’t use them to the fullness of His ability until they surrender that part to Him. It’s just so neat that He has given me that testimony.

“And, yes, I do eat very, very healthy, and yes, I do have a daughter who says, ‘Mom, I’m craving this or that,’ and once in a while I give in to her, but we keep our house as free as possible of non-healthy junk food. “I’ve found the healthier I can make myself, the easier it is for God to use me. Yes, I have diabetes-which I’d rather call live-a-betes-gastroparesis, fibromyalgia, osteoporosis, insulin reactions and three other diseases I can’t even pronounce, but I serve a living Savior Who brings healing every day, and I am a walking miracle that everyone out there can be, too, if they just seek our Savior and Lord Jesus Christ.”