EDMOND—For some athletes, their primary focus lies on their sport of expertise. For Katelyn Levings, her faith and passion for serving others is primary to her sport.

Levings, a sophomore at Edmond Memorial High School and member at Edmond, Oakdale was recently featured by ESPN writer Walter Villa on the sports network’s website, ESPNW, that exists “to serve women as fans and athletes.” 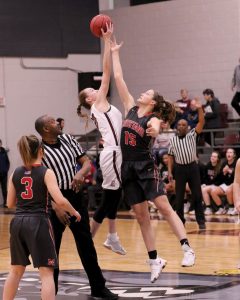 Levings is a stand-out basketball player at Edmond Memorial and on her AAU competitive basketball team, the Oklahoma Swarm. The sophomore forward averages 12 points and eight rebounds per game for her school, which won its regional title earlier this month.

She is also being recruited by major Division I schools like Oklahoma State, Oklahoma, Standford, Rice and Arizona State, to name a few.

Jim Perinovic, Levings’ AUU coach with the Oklahoma Swarm for the last five years, has seen her grow into a “complete player.”

“Katelynn can score from all three levels,” Perinovic said. “Her athleticism allows her to defend any position on the court, and her basketball IQ is very high.”

But what sets her apart from many other athletes her age, aside from her talent, is her heart for missions.

Levings went on a mission trip to the Nicaraguan city of Matagalpa with Edmond, Henderson Hills, where she developed a strong relationship with the children in the city.

Levings served the children teaching arts and crafts, but the children quickly changed the daily agenda to hurling themselves off a ledge and into Levings’ arms each day at recess.

“They would jump in my arms, and they would run back to get in this long line,” Levings told ESPN. “Sometimes they would throw themselves in groups of two or three, and I would have to hurry and catch them and put them down because the next group of kids would be jumping—ready or not. We would do this for hours.”

This isn’t the only time that Levings has elected to give up her free time to serve others. Last year for spring break—a time where many students her age vacation or take time for themselves—Levings went on a mission trip to Santa Cruz, Calif., along with about 30 members from Edmond, Oakdale.

The group volunteered to clean up trash along the beach, among doing other things like offer help to the homeless. Recent storms left the beach covered with debris like pieces of wood and other trash items, but hard work didn’t scare Levings or her peers away.

They later handed out packages with food, water and basic toiletries and necessities, as well as offered spiritual support. 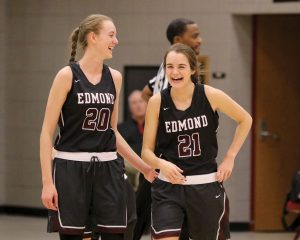 “We would ask them for prayer requests, and some people were open and funny and would tell us their life stories,” Levings told ESPN, “Some of their stories were really sad. One guy lost everything in medical bills when his wife suffered a brain tumor.”

Levings said the experience was humbling and made her grateful for what she has.

The people in Levings’ life recognize what a stellar athlete and well-rounded person she is. Sarah Parker, co-youth pastor at Oakdale and a basketball coach at Oklahoma Christian University in Edmond said about Levings, “I am a firm believer that we have an opportunity to share the Gospel every single day, and occasionally we use our words to do it. Katelyn Levings shares the Gospel in the way she loves and leads wherever God places her—whether that’s on the basketball court with her teammates, in church with her youth group or going to serve on missions.

“The girl has such an incredible talent—seriously she’s a stud—but she is only concerned with doing it for the glory of the One who gave it to her.”

Amidst all of the praise she receives for her athletic talent, Levings also takes care of business inside the classroom with a 4.0 GPA. She also serves locally by doing various forms of community service like volunteering at Bethany Children’s Hospital.

She makes it a point to ask coaches who are recruiting her where their teams’ emphasis for community services lies.

Levings isn’t the only one in her family that is athletically gifted, however. Her father, Kenton is 6-foot-9, her mother Brandi—who is 5-foot-9—played college basketball at Oklahoma City University and her older sister, a 5-9 guard for Edmond Memorial will play NCAA Division II ball next season at Oklahoma Christian. Levings also has a younger brother, Karsten.

Regardless of her full basketball and school schedule, Levings has abundant future plans for mission trips back to Santa Cruz and Nicaragua, this time with her sister. Her father, who went on a mission trip to Uganda, also says that his daughters plan to make a missions trip to the African country he visited sometime in the future.