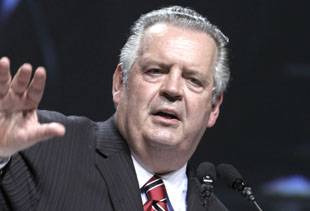 WASHINGTON (BP) — Richard Land, who led the transformation of the Southern Baptist Convention’s ethics entity during the denomination’s conservative resurgence, has announced he will retire next year after a quarter of a century of service as its head.

Land’s retirement as president of the Ethics & Religious Liberty Commission (ERLC) will be effective Oct. 23, 2013, he announced in a letter on July 31 to the acting chairman of the entity’s board of trustees. His retirement is scheduled to take place 25 years from the date he assumed the ERLC’s presidency in 1988.

Land, 65, has acted as an outspoken advocate among Southern Baptists for biblical positions on such issues as the sanctity of human life, religious freedom, marriage and race relations. His staunch efforts during his tenure also have made him a leading evangelical Christian voice among social conservatives in this country’s escalating cultural battles. Time Magazine named him in 2005 as one of America’s 25 most influential evangelicals.

“Dr. Land has been a stalwart leader of conservative and Christian causes and has been at the forefront of protecting our liberty in America,” said Mat Staver, chairman of Liberty Counsel and dean of the Liberty University Law School. “He will certainly be missed in the role that he has played for many years by those of us who have worked closely with him and those of us who have followed his work. I have a high respect for Dr. Land and believe his legacy will continue to be felt throughout the country.”

Don Wildmon, founder of the American Family Association, told Baptist Press, “We’re all indebted to [Land]. I’d hate to see him go, but if he’s going to stay in the wars that’s good. We need him.”

Land made it clear in his letter he is retiring only from the ERLC, “not from the ministry, or from what is popularly called the ‘culture war.'”

“When God called me into the ministry a half century ago, the burden He placed on my heart was for America,” wrote Land, who recently began his 50th year in the gospel ministry. “That call and that burning burden are still there. I believe the ‘culture war’ is a titanic struggle for our nation’s soul and as a minister of Christ’s Gospel, I have no right to retire from that struggle.”

Land chose to announce his retirement nearly 15 months before its effective date to provide “plenty of time for an orderly transition for both the Commission and myself to the next phase of our respective future ministries,” he said in his letter to Richard Piles, acting chairman of the ERLC trustees. He described the ERLC’s ministry as “critically important for both Christ’s church and the nation,” saying, “I pledge to do everything in my power to make the transition to new leadership as smooth and seamless as possible.”

He has received numerous requests through the years regarding opportunities to serve in the public policy, media, ministry and academic fields, Land said.

“Until now, I have not felt freedom to consider such opportunities. God has now given me that freedom,” wrote Land, who said he already is doing some media and public policy consulting in Washington.

He looks forward to working more closely with the Richard Land Center for Cultural Engagement, which is located at Southwestern Baptist Theological Seminary in Fort Worth, Texas, he said.

Land’s hiring in 1988 came amid the ongoing effort by Southern Baptist supporters of biblical inerrancy to restore the convention to its theological roots. Conservative trustees of what was then known as the Christian Life Commission (CLC) had a majority after nearly a decade of appointments to the entity’s board.

The CLC had never had a truly pro-life head since abortion had become a culture-cleaving issue in the 1960s, culminating in the U.S. Supreme Court’s 1973 Roe v. Wade and Doe v. Bolton decisions legalizing the procedure for effectively any reason throughout pregnancy. Foy Valentine, a courageous voice on race relations, was firmly entrenched in the pro-choice camp and fought pro-life efforts within the convention. Larry Baker, Valentine’s successor after more than a quarter of a century of service, did not promote a pro-choice agenda when he took office in 1987, but he also was not a committed pro-lifer. Baker’s tenure lasted only 19 months before he left for a pastorate.

Land took office and began turning the entity in a pro-life -– and more conservative –- direction while stabilizing an agency that was in serious financial straits. He maintained the entity’s strong stands against racial discrimination, gambling, and drug and alcohol abuse.

In the ensuing years, he has acted as a leading voice for Southern Baptists and other evangelicals on not only the various “life” issues but in support of such positions as the accommodation of religious exercise in the public square, combating overseas religious persecution and defending marriage against efforts to legalize same-sex unions.

Land served from 2001 until early 2012, with less than a year off, as a member of the U.S. Commission on International Religious Freedom. The bipartisan panel of nine members chosen by the president and congressional leaders advises the White House, State Department and Congress on the condition of religious liberty in the world’s countries. President George W. Bush appointed Land to his first two terms, and Senate Republican leaders Bill Frist and Mitch McConnell named him to his succeeding three terms.

In 1995, he was a key figure in the passage of a resolution on racial reconciliation upon the 150th anniversary of the Southern Baptist Convention. Messengers meeting that year in Atlanta approved a proposal apologizing to and asking forgiveness of African Americans for racism.

During his tenure, the ERLC has opened a staffed office in Washington, D.C.; received the religious liberty assignment from the convention; and started a radio program.

In his letter, Land said he was 41 years of age when he came to the commission, more than 10 years younger than the next youngest Southern Baptist entity leader and the first “baby boomer” to head a denominational agency.

“It has been the honor, privilege, and blessing of a lifetime to serve the Lord, the wonderful people of God called Southern Baptists, and other brothers and sisters in the faith through the ERLC for virtually half of my entire ministry,” he wrote.

While at the ERLC, Land has written or co-edited eight books, including “The Divided States of America? What Liberals and Conservatives Get Wrong About Faith and Politics.”

Before becoming the ethics entity’s head, Land had served as vice president for academic affairs at Criswell College in Dallas since 1980 and was a strong defender of inerrancy. He had been professor of theology and church history at the school since 1975.

Land took a leave of absence from Criswell College for 17 months during 1987-88 to serve as senior adviser to Texas Gov. William Clements on church-state issues, as well as such initiatives as anti-abortion, anti-pornography and anti-drug legislation.

He received a doctor of philosophy degree from Oxford University in England, a master of theology from New Orleans Baptist Theological Seminary and a bachelor of arts from Princeton University.

I have just commenced my 50th year in Christian ministry and I will very soon begin my 25th year as president of the Ethics & Religious Liberty Commission. It hardly seems possible. A quarter century! 25 years! 300 months! 9,130 days!

When I came to the Commission in 1988 I was, at 41, more than a decade younger than the next youngest entity head and the first baby boomer to lead a Southern Baptist entity.

It has been the honor, privilege, and blessing of a lifetime to serve the Lord, the wonderful people of God called Southern Baptists, and other brothers and sisters in the faith through the ERLC for virtually half of my entire ministry. Now, I believe that God has led me to the place where He is releasing me to other places of service in His Kingdom. Consequently, I am announcing my retirement from the Ethics & Religious Liberty Commission, effective October 23, 2013 which will mark the completion of 25 years of service to the day since I assumed office October 23, 1988.

Let me be clear, I am retiring from the ERLC, not from the ministry, or from what is popularly called the “culture war.” When God called me into His ministry a half century ago, He put no time limit on that service. It was, and is, a lifetime calling. As my pastor said a few weeks ago, “when God puts His hand on you, He never does let go.”

I will do my best to continue to serve my Savior and His church wherever and however He leads. When God called me into the ministry a half century ago, the burden He placed on my heart was for America. That call and that burning burden are still there. I believe the “culture war” is a titanic spiritual struggle for our nation’s soul and as a minister of Christ’s Gospel, I have no right to retire from that struggle.

I am looking forward. My denominational service, while always close to my heart, has to some degree inevitably limited my participation in the culture war’s political debates. I have had numerous inquiries over the years about other places and means of service including public policy and media opportunities as well and ministry and academic pursuits. Until now, I have not felt freedom to consider such opportunities. God has now given me that freedom.

I am announcing my retirement from the ERLC now so that there will be plenty of time for an orderly transition for both the Commission and myself to the next phase of our respective future ministries. I believe that the ERLC’s ministry is critically important for both Christ’s church and the nation and I pledge to do everything in my power to make the transition to new leadership as smooth and seamless as possible.

I am already doing some media and public policy consulting in Washington and recently I have been made aware of other future possibilities in these areas. Also, I am looking forward to working ever more closely with the Richard Land Center for Cultural Engagement at Southwestern Baptist Theological Seminary in Fort Worth in the months and years ahead. I am truly excited about the many things the Lord is already doing there under the very capable leadership of the center’s director, Dr. Craig Mitchell.

I will do my very best to be open to God’s will for my future ministry service, wherever and whatever it may be. Like Abraham, I go forth “not knowing” yet where God will lead just knowing that wherever it is I will follow His direction (Hebrews 11 :8).

As I said earlier, I am leaving the ERLC, not the ministry. My Heavenly Father’s call was for the rest of my life. The closing words of one of my favorite poems (Robert Frost, “Stopping by Woods on a Snowy Evening”) best describe my commitment to continue to follow God’s call on my life: