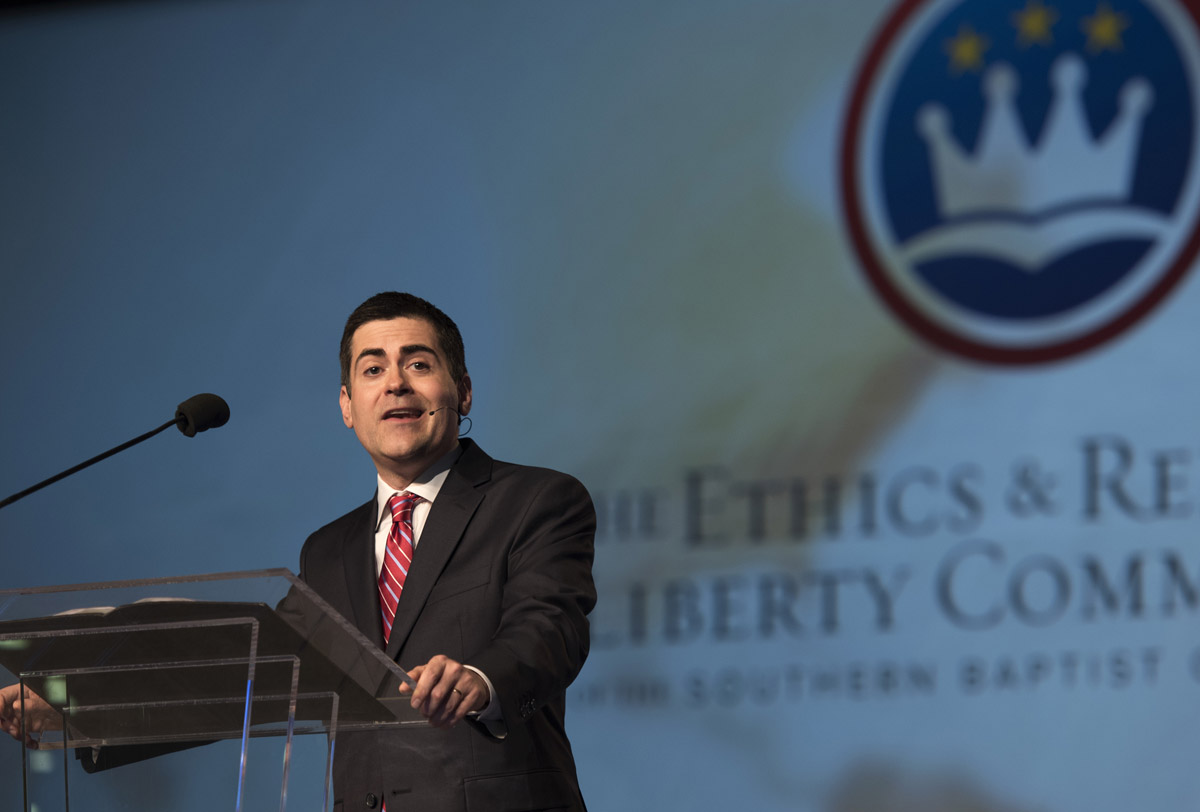 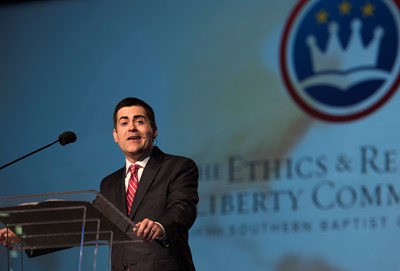 Moore, the ERLC’s president, told messengers, “We must contend for religious freedom for our brothers and sisters in Christ and for everyone else wherever they are on the globe.” He added, “We will not stand idly by while those with whom we will share eternity are being led to the slaughter.”

Also during the ERLC report, Barronelle Stutzman, the Washington state florist punished for refusing to participate in a same-sex wedding, received a standing ovation by messengers at the convention in Columbus, Ohio.

“Mrs. Stutzman knew that the truth is not up for sale and the Gospel doesn’t bend to the highest bidder,” Moore said, “and faithful Christians do not stow away their convictions in a blind trust when they enter the public square.”

The ERLC announced the appointment of Travis Wussow of Austin, Texas, as ERLC director of international justice and religious liberty in a news release, also on June 17.

Through its Mideast office, the ERLC will develop “a holistic strategy to advocate for religious liberty and social justice around the globe,” the news release stated, listing four primary initiatives:

— “Provide training resources for churches and organizations on issues related to justice and religious liberty.

— “Create original content to raise awareness and champion advocacy through research and storytelling.

— “Collaborate with Baptist Global Response for advocacy and awareness of human needs opportunities.

Moore called the Mideast office “a historic moment for the ERLC” and the location “a strategic key to working for religious liberty with world leaders, especially in the Middle East.”

Moore said Wussow has “the convictional leadership and Gospel courage that leading this office requires, and his work will be of immeasurable value in the ERLC’s goal of advocating for soul freedom around the globe.”

Prior to his appointment as director of international justice and religious liberty, Wussow served as an ERLC legal consultant and as an executive pastor and general counsel for the Austin Stone Community Church in Austin, Texas. Wussow holds a juris doctor and an undergraduate degree in finance from the University of Texas.

“Every day around the world,” Wussow said, “religious minorities face persecution and millions of people are held in slavery. We look forward to advocating on their behalf.”

David Platt, president of the SBC’s International Mission Board, also commented in the news release on the Mideast office.

“Surrounded by the global reality of religious persecution, and driven by our love for God, we must act,” Platt said. “In a land of religious liberty, we have a biblical responsibility to stand up and speak out on their behalf. I am thankful that the ERLC will represent Southern Baptists on issues related to international justice and religious liberty.”

Moore, speaking before introducing Stutzman during the ERLC report, stated that Baptist Christians have been comfortable in American culture for most of the past century.

But, he noted, “Baptist Christianity just doesn’t do well as a water carrier for anybody’s civil religion. Ours is a jailhouse religion, carried to us by heroes who were often outlaws: Paul of Tarsus, Thomas Helwys, Roger Williams, Isaac Backus, John Leland, Martin Luther King Jr.

Some heroes “went straight from the baptistery to the jail cell to the great cloud of witnesses,” Moore said. “We are their sons and their daughters, and we stand here again on the ‘wrong’ side of history, right where we started.”

In the modern struggle for religious liberty, Stutzman’s story stands out, Moore said.

“Barronelle had a difficult choice,” he recounted. “She wanted to be kind to her friend and she wanted to honor him, but as a Christian she didn’t want to violate her conscience by participating in a ceremony that she believed to be wrong.”

Stutzman was found guilty in February of violating a gay couple’s U.S. and state civil rights and was held personally liable for damages and their attorney fees, putting her at risk of losing her business and personal holdings. Backed by the Alliance Defending Freedom, Stutzman is appealing the case and is prepared to take it to the Supreme Court.

Stutzman’s choice was one of courage, compassion, conviction and kindness, Moore said. Her story is one that shocked many, but it is one that Southern Baptists need to be prepared for — “a world in which the Gospel and our convictions seem increasingly strange and freakish,” Moore said.

In his intercession for Stutzman and others struggling for religious liberty, Moore prayed that “every one of us in this room would be able to love the Gospel more than we love our comfort, our security and our safety.”

Also in his report, Moore said the ERLC repeatedly has engaged the public square this past year.

“When one of the most ignorant and willfully deceitful public relations campaigns was waged against religious freedom legislation in Indiana, your ERLC fought back,” Moore said. “Religious liberty was purchased with the blood and toil of our Baptist forefathers, and we will not see it bartered away at the hands of corporate or government bullies.”

When the mayor of Houston “had the audacity to subpoena sermons,” the ERLC made known that soul freedom is not subject to subpoena, Moore said.

“As Christians we will render unto Cesar what is Caesar’s,” he said, “but the preaching of the church of God does not belong to Caesar and we will not hand it over, not now, not ever.”

When Congress refused to pass legislation making it illegal to take the lives of pain-capable children in the womb, the ERLC made clear that “we’re not interested in rhetoric without results, and we fought to see the passage of the Pain-Capable Unborn Protection Act in the United States House of Representatives,” Moore said.

In closing, Moore emphasized that Southern Baptists are not ministers of condemnation but are ministers of reconciliation.