Russell Moore talks with Rosaria Butterfield on “Secret Thoughts of an Unlikely Convert.”

NASHVILLE, Tenn.—Rosaria Butterfield led off the second day of the Ethics and Religious Liberty Commission (ERLC) National Conference on Tues., Oct. 28. The author of Secret Thoughts of an Unlikely Convert participated in a discussion with Russell Moore, ERLC president, who asked Butterfield to share her story of leaving a lesbian lifestyle and turning to Christ.

Butterfield made an emphasis of relationships and how it took a pastor, who she described as an “ordinary Christian,” who recognized the “big sin” in her life was not homosexuality, but unbelief.

“She referred to her pastor, Ken Smith, (as) her neighbor,” said Keith Burkhart, family and men’s ministry specialist for the Baptist General Convention of Oklahoma, who is attending the conference at the Opryland Conference Center. “He really tried to know her and understand her. He was committed to live in communion with her, to walk with her. His home became a place of learning, having that kind of community where we build those relationships.”

Along with sharing her story, Butterfield also encouraged conference attendees that the church needs to open doors to those who are dealing with same-sex attraction and find ways to have community with the LGBT community.

“I just realized that even though I am apparently well-read on the areas of family and men, I am really not as prepared as I thought,” Burkhart said, pointing out that Christians need to have a different paradigm about the LGBT community. “It’s not ‘us against them.’ I think this conference has drawn that out.”

From prisoner to professor

Christopher Yuan, who co-wrote Out of a Far Country: A Gay Son’s Journey to God with his mother, shared how he was arrested for drug dealing, served prison time and was diagnosed with HIV. Yet his mother remained faithful in praying for him. The book they co-wrote shares their memoirs of their experiences through this dark time.

By sharing his story, Yuan hopes to encourage parents who have gay children.

“Parents (of gay children) often feel alone and wracked with guilt. If this is you, I want to tell you it is not your fault,” Yuan said. “Perfect parenting does not guarantee perfect children. The job of (a) Christian parent is not to produce godly children, but to be godly parents. Without my parents living out the Gospel, I wouldn’t be where I am. Let us come alongside our parents—and their gay children—who often feel isolated.” 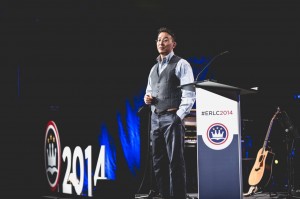 Christopher Yuan addresses the ERLC National Conference on “Out of a Far Country: A Gay Son’s Journey to God.”

Yuan is now a professor of biblical studies at Moody Bible Institute. He ended his speaking time praying for parents and loved ones with LGBT family members.

Butterfield and Yuan were a part of panel discussing “Is It OK To Be Gay? A Candid Conversation On Christians and Same-Sex Attraction.” They were joined by Sam Allberry, a pastor in the U.K., and Jackie Hill Perry, a Christian poet, as all four battled with same-sex attraction.

Panel topics included sexual identity versus identity in Christ, whether a person’s childhood plays a role in sexual orientation, and the choice of celibacy and singleness in the life of a same-sex attracted believer.

“The most complete, full human individual who ever lived is Jesus Christ. And He was single,” said Allberry, who authored the book Is God Anti-Gay?

“We need to create a place in the Church for those who choose long-term singleness,” he said.

“(This panel) really challenged me today,” said Burkhart. “Throughout the conference, I’ve heard a theme of the importance of being in, or reclaiming, biblical community to reach and engage the LGBT community. As Rosaria said, referring to the church, ‘Playing the perfect game has not worked. Let’s try brokenness.’ Living lives of real brokenness through grace and repentance before our LGBT friends and community touches them where they live.”

Moore on Future of Marriage

He opened with reading the passage in John 4 about Jesus and the Woman at the Well, pointing out how Christ knew of the woman’s infidelity, yet still ministered to her.

The ERLC National Convention concludes tomorrow, Wed., Oct 29 with a morning session that will cover more topics relating to marriage.