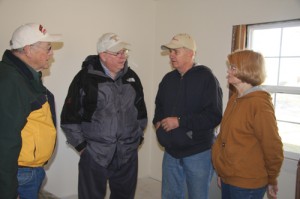 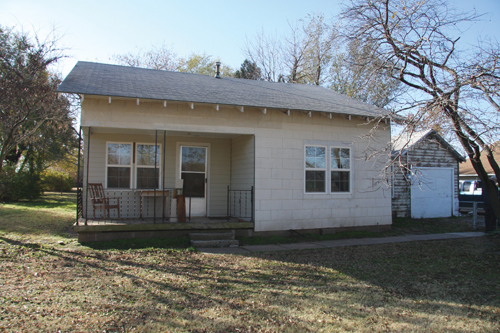 ENID – Phil Templin’s eyes reflect the weariness of a man ready to settle down and take it easy for awhile. As regional leader for Middle America and the Caribbean for the International Mission Board of the Southern Baptist Convention for the past 11 years, Templin rarely felt “at home” last year.

“Last year, I had 160 days that I did not sleep in my own bed,” said the Corvalis, Ore. native who is nearing retirement after serving alongside his wife, Peggy-an Enid native-with the IMB for 24 years, including 13 years in Mexico. They now reside in Guatemala City.

The Templins’ plans for retirement, which is scheduled for June 2010, include settling down into a 900-plus-square-foot, two-bedroom house in Enid. They purchased the wood-frame house, which was built in 1927, from Peggy’s uncle three years ago, and have spent vacation time since then getting it into shape to move into. The house has no closets, a small kitchen, living room and a dining room.

“I grew up as a preacher’s kid, so we never had a home for more than a few years,” Phil, 63, said. ‘We always moved on, and this will be the first place we can really call home.

“We’ve never actually lived in it yet, because as you can see, it needs a lot of work. We did overnight one night here, but when you don’t have plumbing, that makes it pretty inconvenient,” he laughed.

Phil added that Peggy’s father, Clayton Voth, who at age 83 has been helping the Templins do the remodel work, has a pet name for the structure.

Recently, Peggy was busy stripping asphalt shingles off the walls of a small garage that is attached to the house via an enclosed walkway and putting them in trash bags, which Phil then loaded into a pick-up to be hauled away.

The work was taxing physically on Phil, and not just because of his age. He suffers from Parkinson’s Disease, a degenerative disorder of the central nervous system that often impairs the sufferer’s motor skills, speech and other functions. Prominent sufferers of the disease include evangelist Billy Graham, former boxing champion Muhammad Ali and actor Michael J. Fox. 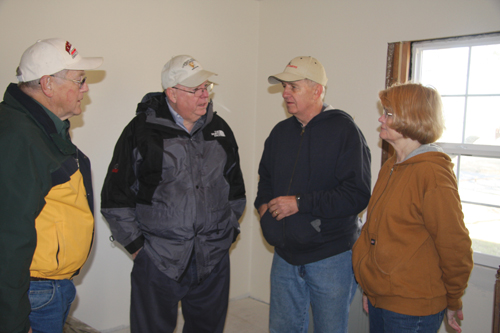 Templin recognizes the seriousness of his declining health, and the urgency of completing the retirement home.

“I have Parkinson’s,” he stated matter-of-factly. “It’s just like Parkinson’s does, progressing little by little and taking away those little things that I’ve always been able to do. Carpentry work was one of the things I always loved doing, and I’m having a hard time doing those kinds of things now.

“I love to preach, and I can’t do well preaching anymore because I can’t think far enough ahead. So, just little by little, I’m losing all of those things.

“We’d like to have a house by the time I retire. We hope to go final stateside in June 2010, if I can make it physically that long.”

The Templins are back in Guatemala, and plan to return in April to resume working on their house. Before they left Oklahoma, they met with Don Rogers, director of missions for Cherokee Strip Association, and some others who offered to help speed up the process and expand on it a bit.

Through a rapidly-occurring series of events, Oklahoma Baptists were made aware of the Templins’ desire to have a retirement home. It actually began when Phil made an offhand comment to Tom Elliff, senior vice president for spiritual nurture and church relations for the IMB, during a regional meting last fall. Elliff, former pastor of Del City, First Southern, is well acquainted with the Templins through both the IMB and First Southern, where their son-in-law, Michael Pruegert, serves as children’s minister.

Elliff got word of the Templins’ need back to Oklahoma, and the wheels began to turn.

“This is an opportunity for us to really minister,” Rogers said. “First of all, their whole ministry life has been serving for us and the Lord when we have promoted missions and sent people out, and now here is an opportunity to help them when they come home.

“I’m thankful being Southern Baptist that there are provisions and retirement and such for our folk. But here is a special need. This has been recognized, and the thing that has impressed me about Phil is the responsibilities he has had for the past several years as a regional director. He’s an impressive person. He’s so gentle and meek in his spirit. He and Peggy love their work.

“Our heart should go out to them because of who they are and what they have done for us and with us. This gives us an opportunity really to welcome them back and extend a hand of Christian love to them.”

Dennis Treat, a member at Enid, Emmanuel, worked with a local architect to develop plans, which will have to be approved by Enid city officials. The plans call for a 20-foot-by-30-foot addition to the Templins’ house. The garage, connecting walkway, existing front porch and six trees in the yard were removed by volunteers from Covington, First on Dec. 13. The old living room will be converted into a master suite, including a large walk-in closet, with the new addition serving as a great room and also including HVAC and laundry space and providing a new entry. Closets also will be added to the two existing bedrooms.

“This has got to be one of the most overwhelming expressions of love and concern I’ve ever seen,” Elliff said when he heard of the plans. “Oklahoma Baptist men, you are absolutely incredible! Thank you, thank you, thank you for using your time and resources to bless one of the greatest veteran missionary couples we’ve ever had on the IMB team. God bless you!”

The cost estimate for the work is around $30,000, said John Doffer, ministry associate for Cherokee Strip Association. Electrical work and materials for the job have been donated by Danny Houston, a member of Covington, First, and another $2,550 in cash had been donated as of Dec. 17.

Pastors in the Cherokee Strip Association unanimously voted on Dec. 17 to oversee the project, and a special account to pay for the rest of the work has been set up at the association office. Donations may be sent to P.O. Box 5287, Enid, 73702. Checks should be earmarked “Templin House.”

Volunteer builders from other groups also will be needed. Volunteers should contact Rogers at 580/234-2512.

As to the scope of the project, Peggy said, “It’s an unexpected blessing. It’s a lot more than we deserve.”

“We just never thought about having anything more than this little house, but the response has just been incredible,” Phil said.

“We’re sure meeting a lot of wonderful people along the way; that’s for sure,” Peggy added.

That should help Phil adjust to becoming a “flatlander.” Having been born in Oregon, raised in Montana and having attended college in Washington state, he loves the mountains.

And, as he approaches retirement from the mission field, he relishes the legacy of his family in mission work.

The Templins’ son, Nathan, 33, is fluent in Spanish and graduated from Southwestern Seminary in December. He is on track to do multi-ethnic church planting with the North American Mission Board in Colorado.

“With my son going into missions, that will be four generations,” Phil beamed. “My grandfather was a missionary to the Cheyenne Indians, my father was a church planter in Montana, I’ve served in Central America and our son is going to Colorado.”

Peg was born and raised in Enid. The couple met when Phil was in pilot training at Vance Air Force Base and they were married on Sept. 12, 1970. Phil was in the Air Force for 11 years, serving in Viet Nam. They then lived in Virginia and Florida before moving to Mexico with the IMB in 1985.