“We’ve heard over and over from families who have come in of how badly needed this was,” said Cathy Henderson who serves as campus director for Baptist Village of Elk City. “There seems to be a lot of excitement in the area.”

Henderson joined BVC in October and has seen quite a bit of recent activity.

“We opened last week (Dec. 7), and between then and now we have seven new residents,” she said, mentioning the inaugural inhabitants include two couples, but more are expected 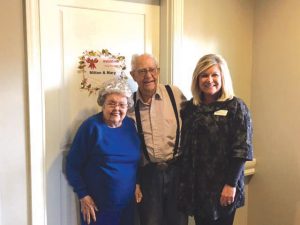 soon. “We do have a waiting list, and some are waiting to move in after the holidays.”

Baptist Village of Elk City consists of 60 apartments, which are divided into four “Neighborhoods” (15 apartments each). Two of the Neighborhoods are dedicated to residents needing assistance in living, and the other two Neighborhoods provide living experiences for residents who need memory support.

“The opening of The Neighborhoods at Baptist Village of Elk City was years in the making.  God brought it about in His timing and worked in the lives of many, many people to make it all possible,” said Steve Thomas, BVC vice president of operations. “It was thrilling to see the first residents and families being served in this new community with the expectation of serving hundreds and thousands of others in the years to come.  We are blessed beyond measure, let the ministry begin in western Oklahoma.”

Baptist Village of Elk City is already planning for immediate occupancy. Henderson said they have set goals in the first 18 months of operation.

“We are hoping to move in about three residents a month,” she said.

Henderson said one thing all the current residents have talked about is how wonderful the meals are. “They have raved over the food,” she said.

“It’s a great time for fellowshipping and socializing. They have really loved that part of it,” Henderson said.

Baptist Village of Elk City experienced a major setback last year, as the building, still under construction, was destroyed by fire in Sept. 2015. The village was originally projected to be open for business in March or April 2016.

Soon after the fire occurred, Bill Pierce, BVC president, expressed how sad everyone felt, and it affected many, including 30 prospective residents who were on a waiting list. He also was very appreciative of those who helped with putting out the fire and with recovery

“We are extremely blessed that there are no significant injuries or damage to the surrounding neighborhoods,” Pierce said in the aftermath. “There were many heroes including the firefighters from eight communities and the people of Elk City and the First Baptist Church and the Baptist Disaster Relief. We have suffered a setback, but we serve a great God who brings new beginnings out of the ashes.”

“It really brought the community together,” Henderson said about last year’s fire incident. “Everybody of the community that I have spoken with feels they have a personal interest. They all want to be a part of pulling together. It has been awesome. Even before the fire, I think the community was supportive, but this just brought us even more together.” 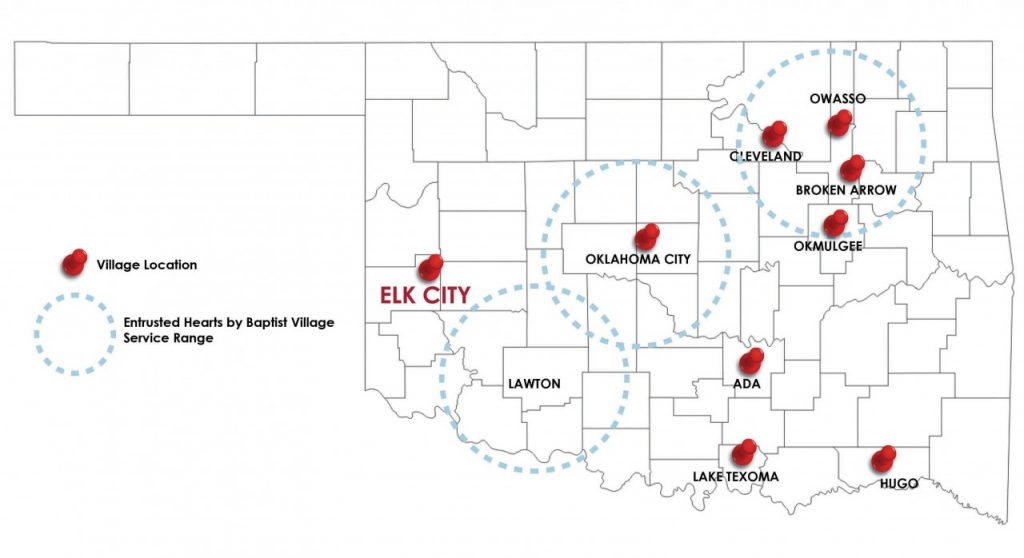 “They are absolutely loving it,” she said. “Most of them have worked in other places. (Baptist Village) is so different from anything they have done.”

Pierce shared his appreciation for BVC’s ninth village, knowing it will impact many people in the western region of Oklahoma.

“We are thankful that God led BVC to Elk City,” he said. “It is a blessing to serve the entire area. We expect to serve people who live within a 50 mile radius of Elk City.”

Baptist Village of Elk City is on the land adjacent to Elk City, First. The church donated the land to BVC.

“We are thankful that the people of First Baptist Church and Pastor Russell Duck, who served on the BVC board, had a vision for this ministry,” Pierce said. “They faithfully gifted us land and other resources. They prayed with us and were so supportive when we experienced the fire. They cried with us. Now, we rejoice together as we see the first residents served.”

Those interested in touring Baptist Village of Elk City are welcome to visit. Tour appointments can be made by calling 580/225-5555.

“Come visit the village. We want you to meet the people who serve there—residents and friends team members,” Pierce said.