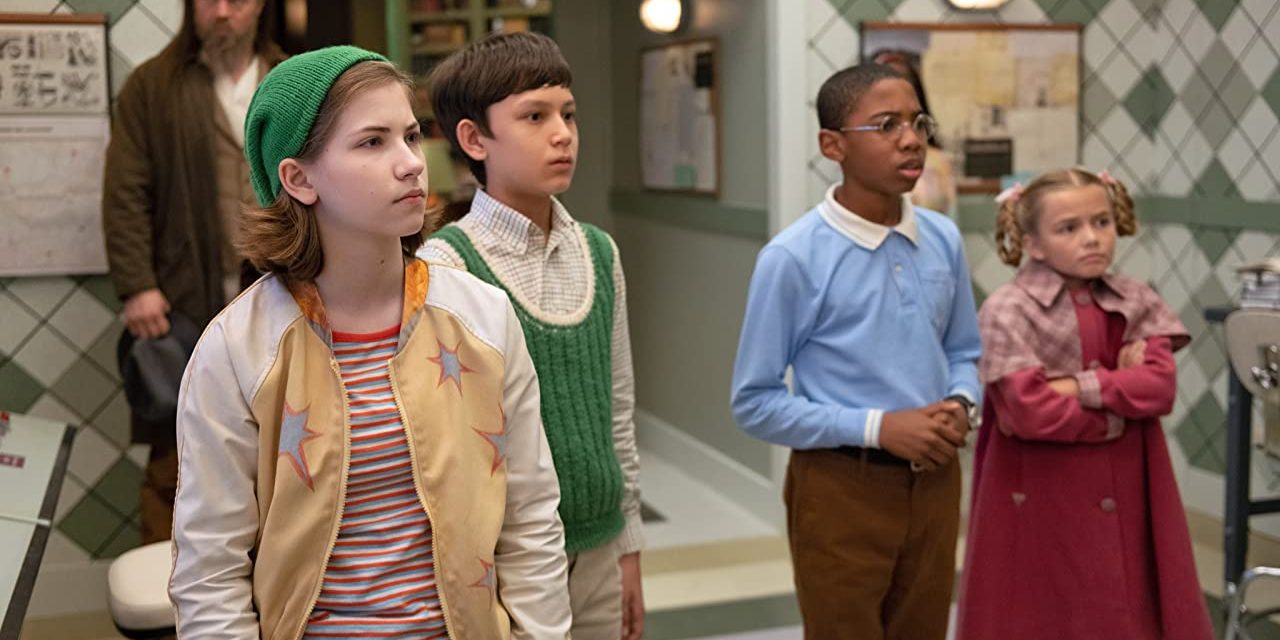 It’s not easy finding a television series the whole family can watch, especially when the household includes children and teenagers—not to mention a mom and a dad.

It seems most TV series either are too mature for the youngsters or too child-like for the picky teens in the clan.

Still, there are a handful of programs that bridge the divide, and Disney Plus has the newest entry.

Called The Mysterious Benedict Society (TV-PG), pictured above, it debuted June 25 and tells the story of four gifted orphans who are recruited by a mysterious man named Mr. Benefit to stop a worldwide crisis called “The Emergency.” This Emergency—we are told—has led to the eradication of truth and empathy.

In order for the orphans to reach their goal, they must successfully penetrate the L.I.V.E. Institute, a school that resides across the bay.

The Mysterious Benedict Society is an eight-episode live-action series and is based on the best-selling book series by Trenton Lee Stewart.

The humor makes it cross-generational, as do the cliffhanger endings and the family-friendly themes.

The comedy is similar to that in A Series of Unfortunate Events—quirky and original. In the first 15 minutes of the series, an eccentric teacher tells a classroom of frightened students they’ll be “executed” if they’re caught cheating. Soon, though, she corrects herself: She meant to say “excused.” Seconds later, she’s drinking a large jar of pickle juice. (Why? Who knows?) It’s crazy enough to make adults and children alike laugh.

Each episode ends with a cliffhanger that makes you want to want to start the next episode. But with Disney Plus releasing the episodes weekly—a streaming strategy I like—you’ll have to wait a few days to learn what happens.

Thankfully, the series also is family-friendly. The first two episodes include no sexuality or violence and only minor language (I caught one “OMG.”) If you need anything skipped, then give the filtering service ClearPlay a try. (It works with The Mysterious Benedict Society.)

Luca (Disney Plus)—A young boy and his friend spend a summer in a seaside Italian town with the goal of winning a triathlon as they harbor a secret: The two boys are undercover sea monsters. Luca is the latest film from Pixar, which (tragically) released the movie on Disney Plus instead of in theaters due to the pandemic. It includes a strong message about friendship and an inspiring allegory about race. Rated PG for rude humor, language, some thematic elements and brief violence.

Birdie (Pureflix)—A single father recently released from prison tries to reconnect with the 8-year-old daughter he barely knew. Unfortunately for him, she’s being raised by grandparents who don’t want him near her. It’s an uplifting story about redemption, forgiveness and the Gospel. LaRonn Marzett is stellar in the lead role.

Summer of Soul (Theaters and Hulu—teens and above)—It’s a documentary about the 1969 Harlem Cultural Festival, a series of concerts that drew well-known names and hundreds of thousands of fans but were largely forgotten—until now. Sly and the Family Stone, Stevie Wonder and Fifth Dimension all sang. Gospel music also played a major role in the festival and is spotlighted in the film (led by the Edwin Hawkins Singers’ Oh Happy Day). I caught only one coarse word (a “GD,” said when musician Ray Barretto is performing.) Rated PG-13 for some disturbing images, smoking and brief drug material. This one is best for teens and adults.

Capital One College Bowl Game Show (NBC, Peacock TV)—Peyton Manning and his brother Cooper host this trivia game show that features students from rival colleges going head to head. (Students from Alabama and Auburn faced off in one of the first episodes.) It is a revival of a game show that first aired in 1959. The first season includes 10 episodes and airs each Tuesday. Rated TV-PG.