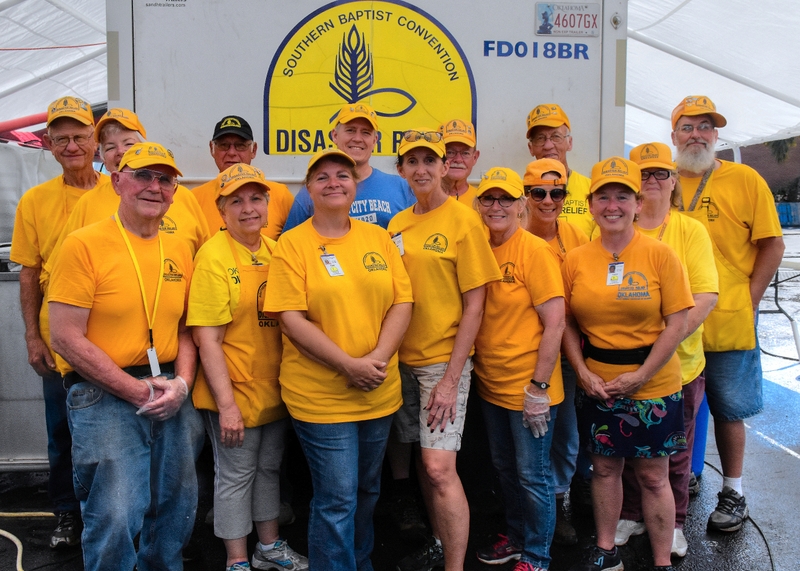 ALPHARETTA, Ga.—For more than 50 years, Southern Baptists have provided disaster relief to the United States and its territories after the gravest of tragedies. Whether it is major natural disasters that affect millions or localized events that hit small communities, Southern Baptist Disaster Relief (SBDR) volunteers regularly arrive to bring help, healing and hope to those impacted.

“I want to give a special ‘thank you’ to all of those who make Southern Baptist Disaster Relief possible,” said Kevin Ezell, president of the North American Mission Board (NAMB). “To all of our volunteers who give their time so generously and sacrificially, you are amazing people, and we cannot thank you enough.”

As they provide physical relief, volunteers also engage in providing emotional and spiritual support. SBDR reported seeing 540 professions of faith as they shared the gospel.

Southern Baptists respond to disasters both big and small because numerous churches, associations and state conventions work together to make it happen. During national events, like Hurricanes Florence and Michael, NAMB helped coordinate a multi-state response and work with national partners such as American Red Cross, the Salvation Army and FEMA.

“Southern Baptist Disaster Relief would not happen without the churches, associations and state conventions investing in the task,” Ezell said. “We are honored to get to partner with and support the grassroots efforts of our fellow Southern Baptists.”

Following the historic hurricane season in 2017, President Trump formally recognized SBDR at the White House as one of the “big three” volunteer organizations in disaster relief.

After Hurricanes Florence and Michael, SBDR sites have been visited by the President, the Vice President, state governors and members of Congress. Decades of dedicated service from Southern Baptists have culminated the national recognition of the work provided by thousands of trained and equipped volunteers.

“For years, Southern Baptists have been working in the trenches, never asking for thanks,” said Sam Porter, the national director of disaster relief at NAMB. “After serving in disaster relief for more than 20 years, I’m extremely grateful to see our story told. It is a testimony to the heart and determination of Southern Baptists around the nation, those who give and those who go.”

In the week leading up to Disaster Relief Appreciation Sunday on November 11, NAMB shared stories and photos on social media of a few volunteers who have served in 2018. Their stories can be found at facebook.com/NAMB.SBC.

Response to Hurricanes Florence and Michael are ongoing. To learn more, donate to or find ways to volunteer with SBDR, click here.

To make a tax-deductible donation or for more information about Oklahoma Baptist Disaster Relief, visit www.okdisasterhelp.org.

A ‘thank you’ video from NAMB president Kevin Ezell can be viewed and downloaded here.

View all posts by NAMB Staff