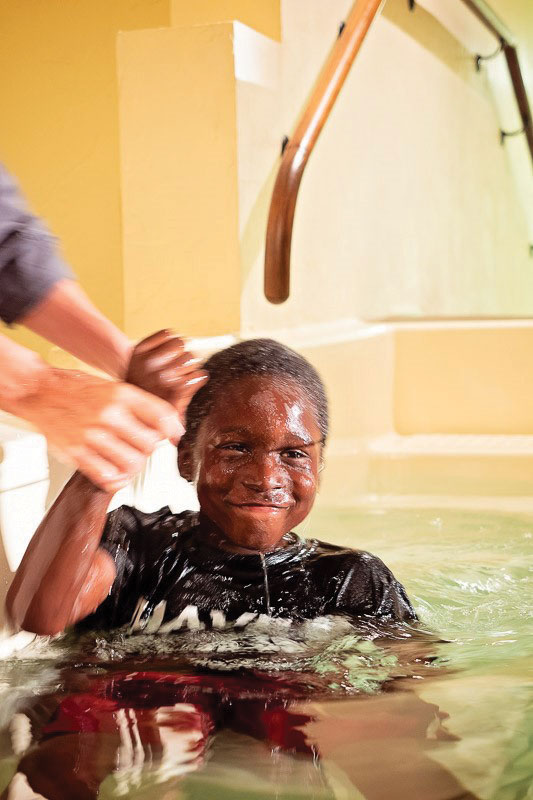 A child smiles after his baptism at Del City, Sunnylane Southern. [Photo provided]

DEL CITY—Over the course of a calendar year, a church that runs just under 300 on a Sunday morning has baptized 94 believers.

Pastor Danny Gandara, who has been at Del City, Sunnylane Southern for a calendar year, said the Lord’s work has been mighty, and it’s not because of anything that he has specifically done, rather pure obedience to the Lord’s leading.

“At an evangelism tune up I heard the phrase ‘in everything you do, a soul should be changed and a life should be saved,’ so that’s what we’re all about,” Gandara said.

Gandara said no matter the day or time of the service at Sunnylane, the Gospel is preached and an invitation time will follow. It has been that way since the day he came in view of a call, when eight professions of faith in Christ were made.

He talked about how, earlier in his life, he was someone who would go to church, and “did the church thing and wore a religious mask on Sundays.” However, Gandara said it wasn’t until later that he realized salvation is about a surrender. “You have to give up your rights,” he said. “So that’s been my heartbeat, and we really focus on God revealing that to a lot of people.”

In terms of who has been baptized at Sunnlylane, there is no age limit. Gandara says many children have followed their profession of faith in Christ with believer’s baptism, as well as people well into their 80s.

“First there were quite a few church members who had never taken that next step in their faith. From there, it kind of spread to a wide range of people,” Gandara said. “People are excited and passionate about souls, so they started inviting their friends, and it’s just been a multiplication process ever since.”

Gandara said, at Sunnylane, there is a heavy emphasis on getting outside of the church walls and inviting people to hear the Gospel. There was a big push before Easter to invite as many people to come to church as possible.

“There’s a lot of brokenness in the Del City community, but we really care about the community. We went out into the community and canvased, knocking on doors and inviting people to church,” Gandara said.

“Later that month we had a revival, and 22 people got saved. We prepared for that revival meeting through prayer. We embraced the brokenness of our community and accepted anybody, and lives have been changed because of it.”

Sunnylane members have obediently adopted the “soul getting changed and life getting saved” focus encouraged through Gandara’s preaching.

“From changing a diaper to answering a phone, it needs to be about the operation of our church focusing on a soul being changed and a life being saved. Anything that is not involved in that, we’re not going to be a part of it,” Gandara said.

Sunday School classes are now “Connect Groups.” “We changed the name to Connect Groups because you connect with God, His word and other people. We cast the vision of reaching, teaching and ministering through connect groups, and it has taken off,” Gandara said.

Gandara said each Connect Group is like its own little church. In each group there is a Care group leader, who organizes hospital visits and other miscellaneous care acts, and an outreach group leader, who connects with more people, and a teacher, who teaches lessons.

Once someone makes a profession of faith in Jesus Christ at Sunnylane, they are then directed towards two counseling opportunities. First, the team of encouragers, which is made of staff members, talks with the person.

Then, the person goes through a “Firm Foundations” class, which guides them through Scripture like the Romans Road and makes sure there is a thorough understanding of the decision they have made.

One thing that Gandara made clear however, is that nothing he has done is the reason why the church is experiencing so much life change. “God has done all the work, we’ve just gotten in on the plan and followed Him.”