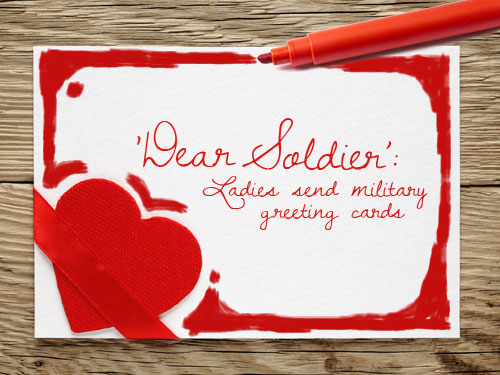 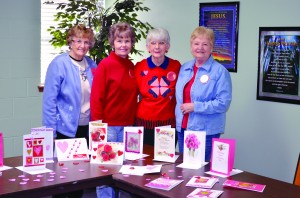 From left, Sandy Lees, Jo Ann Johnson, Jolane Gardner and Dolores Davis are members of the Midwest City, Meadowood Soldier Card Project. The group is preparing to send Valentine’s Day cards to men and women in the military serving overseas, as well as to patients at Veterans’ Hospitals in Oklahoma City and Norman.

MIDWEST CITY—Jolane Gardner and her friends care enough to send their very best.

Hallmark may be the standard for greeting cards, but the national retailer may not have the impact these ladies have on American service men and women.

“We cut old Christmas cards into strips and sort by dominant color,” Gardner said. “Then we glue the strips onto the ‘love, so and so’ side. After they are dry, we turn over the page and draw outlines of shapes and cut them out. Then we decorate a new blank card that we have made.”

The Soldier Card Project team have sent more than 1,000 cards to military personnel overseas, as well as patients at the Oklahoma City and Norman Veterans’ Hospitals.

“This is a worthwhile project as we make sets of cards to thank our soldiers for serving our country,” said Gardner. “We also make a second set with a different theme—cards for them to send back home.”

Gardner said most patients at the VA hospitals never get mail, and the group wanted to support them as well.

Recently, they received a letter from a soldier serving in Afganistan who was touched by the groups’ greeting cards.

“You have a special place in my heart,” the soldier wrote, thanking them for sending “a card from home.”

The group has been featured in the Oklahoman’s “Melba’s Swap Shop” column, and the feature has attracted others to participate in their weekly meetings.