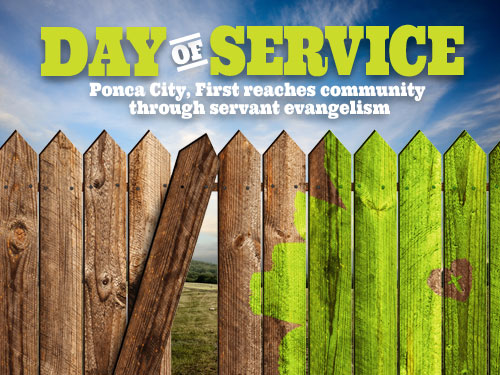 PONCA CITY—During the interim before Andy Taylor took the helm as pastor at Ponca City, First the church recognized it had a problem.

“The church identified that it had become a very inward focused church,” Taylor said.

The congregation, which had gained a reputation as a “country club church” with an abundance of white-collar members, wanted to, instead, build an image of a church that was in touch with the needs of its community.

“And we couldn’t do that if all we did was just continue to gather at our meetings,” Taylor acknowledged.

An idea for a bold new approach came when Rob Murray joined the church. A former resident of Joplin, Mo., Murray suggested the church consider something he was involved with in the tornado-stricken city: A day of service to the community called the Great Day of Service.

“When Rob came with the idea, it fit perfectly with what I see as a biblical concept of the church in that the church is not only called to hold church services,” Taylor said. “And so I was very excited about the possibility of us doing this.”

Murray led a team that put in motion a plan for Ponca City, First’s members, joining with members from other churches, to spend a Sunday serving the poor in their community. Coordinating with the city, the team found 12 square blocks that needed the most work and assigned them to clean-up teams. Special teams volunteered to provide lunch and day care.

“The people in this church just took off with it,” Murray said.

By 11 a.m., the church members left for work, wearing the fluorescent green T-shirts made for the event. Taylor had prayed for 300 people to sign up for the Great Day of Service. More than 450 showed up from three different churches.

The teams set to work mowing, trimming, chopping up downed trees and picking up trash—anything that needed to be done. One team helped a young couple take down a back porch that had been falling apart. Another group hauled five trailers of unwanted items from two houses.

Volunteers provided daycare for children under 5, while older children helped with the cleanup however they could. Church members who couldn’t get around sought the Lord in a prayer tent.

“We were all just united in one purpose for that day, and to me, it was just an amazing thing,” Taylor said.

Only 30 minutes into the project, the teams had already filled up six large trash containers provided by the city and had to start piling debris in vacant lots.

Neighborhood residents, shocked that people would help them for free, came outside to pitch in. Elderly residents brought out cookies and lemonade, with one woman just thankful to see somebody she could talk with. One man started up an antique fire truck he owned and spontaneously gave rides to the children.

“They were all pretty ecstatic to see somebody who would actually volunteer to (work in their neighborhood),” said Tim Stein, a Ponca City, First member who hosted the Great Day of Service’s tents on property next to his glass business.

At 1 p.m., the workers broke for lunch, joined by some of the residents they helped. A prayer and praise service after lunch capped off the day. Taylor said team members will follow up with residents who needed more work or simply wanted to talk, and that his congregation is itching for more opportunities to serve.

“I know that before the day was over, people already were begging me to do it again soon,” he said.

Taylor believes the Great Day of Service has given Ponca City, First a new sense of unity, that when its members all do their part, they can accomplish great things by God’s power.

“It’s also shown our church that we are capable of being the hands and feet of Christ in the community, and that church is not just about showing up on Sunday morning to be given something, but being the church is about giving something and doing the work of the ministry,” he said.

He added that the Gospel was the motivating force behind the Great Day of Service; that Ponca City, First’s members might demonstrate with their actions what they hear on Sunday.

“It’s that our people don’t just hear the Gospel, but they learn how to live the Gospel,” he said.