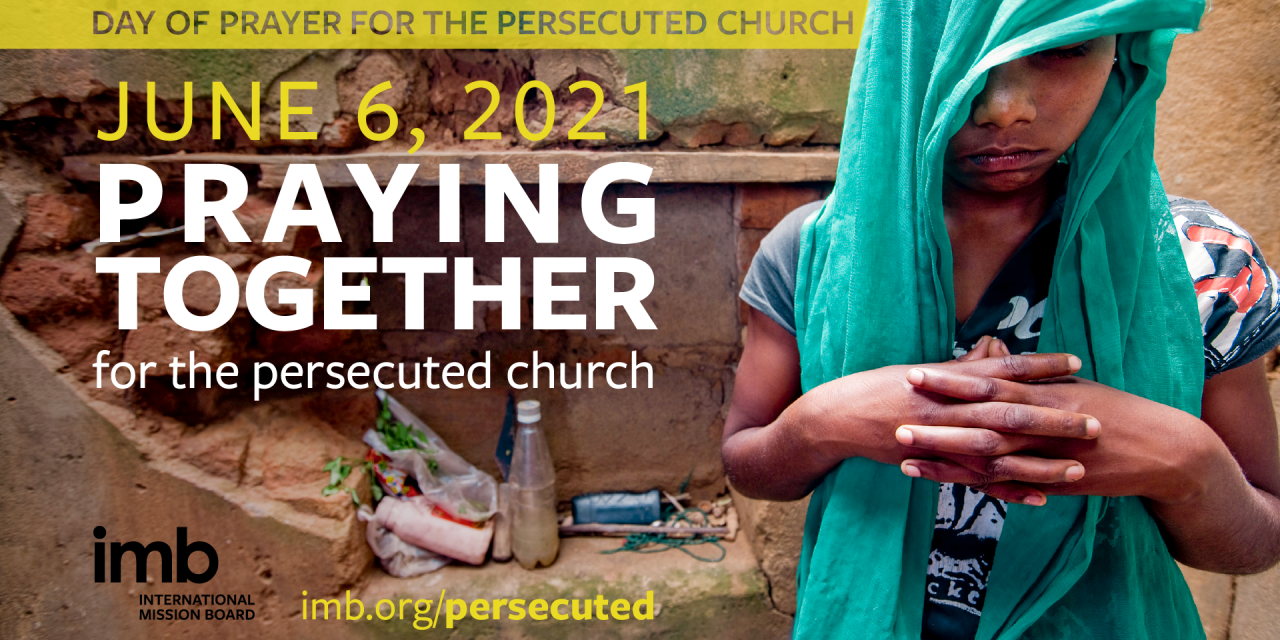 RICHMOND, Va. (BP)—The International Mission Board (IMB) is collaborating with Nik Ripken Ministries to raise awareness about current religious persecution through the Day of Prayer for the Persecuted Church. This SBC-wide initiative will be observed June 6. It is a call for Southern Baptists to increase their awareness of and pray fervently for the global persecuted church.

In 2020, more than 340 million Christians experienced high levels of persecution and discrimination. Also last year, 4,761 Christians were killed for faith-related reasons, and 4,277 Christians were detained without trial, arrested, sentenced or imprisoned. In addition, 4,488 churches and Christian buildings were attacked, according to data from the World Watch List.

“As our Southern Baptist missionaries take the Gospel to the most difficult to reach peoples and places around the world, they are witness to the suffering of those who boldly follow Jesus and are constantly confronted by those who persecute the Lord’s church,” IMB President Paul Chitwood said. “While our hearts break for our brothers and sisters in Christ who endure persecution and even martyrdom, we often feel powerless to help them. But we aren’t! We serve the One who, as Job declared, ‘makes nations great, and he destroys them; he enlarges nations, and leads them away.’ 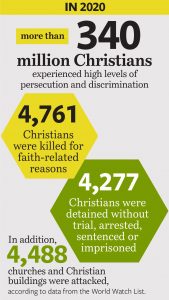 “When we pray for those who are suffering, we have access to the One who can sustain them, comfort them and bring them justice.”

Persecution of the global church comes most fiercely from within a believer’s own family, according to John Brady, the IMB’s vice president for global engagement. However, many believers are facing intense persecution from opposing religious groups and their governments as well.

Familial persecution is evident in the life of Naomi*, a Deaf widow. COVID-19 forced her to move out of her city in Indonesia back home to a remote island. There, she converted from Islam to Christianity after working with an IMB Deaf translation team in her former city. Her parents were irate, and her dad locked her in his home and beat her daily, trying to get her to abandon her newfound faith.

Because of her daily beatings, she developed serious health complications. As she was being treated in a city six hours away, her 9-year-old daughter reached out to her mother’s church leaders for prayer. Naomi eventually recovered, and her daughter has been able to see the Lord work in her mother’s life.

However, Naomi, like so many other believers around the world, still needs prayer.

“Don’t pray for our persecution to end,” a missionary reported a national believer saying. “Pray that we will be obedient through our suffering.”

Nik Ripken*, author of “The Insanity of God” and IMB missionary emeritus, said the main cause of persecution globally is when individuals profess Christ as Savior. Ripken has spent more than two decades studying global persecution and collecting stories from persecuted believers.

“If believers and their churches simply pray to God for persecution to end, the only way for God to answer that type of prayer is to stop people from following Jesus,” Ripken said. “Rather, we pray for persecuted believers to remain obedient through their suffering, and we seek to identify with persecuted believers by sharing our faith in whatever environment we find ourselves.”

Eleanor Witcher, director of the IMB’s Prayer Office, believes that one of the primary prayer needs for the persecuted church is discipleship.

“Pray that the roots of new believers (and believers who are weak in their knowledge of the Word) will quickly grow deep in Scripture as they learn to abide in Christ so that these new believers will stand firm under any persecution they may face,” Witcher said.

Witcher emphasized that this need for discipleship, growth in the Word and increased evangelism is something that all believers, not just persecuted believers, must cultivate in their own lives.

Southern Baptists are invited to join in prayer in the weeks leading up to the Day of Prayer. Specifically, believers can pray for:

Ripken believes that God’s highest purpose in persecution is to call His people to Himself, to refocus their attention to the suffering of their Lord.

“When followers of Christ suffer willingly for their Savior, it gives their faith value,” he said. “That kind of suffering also increases witness.”

Join other believers across the Southern Baptist Convention by committing to pray for the persecuted church. Visit imb.org/persecuted and sign up to receive a free prayer guide.