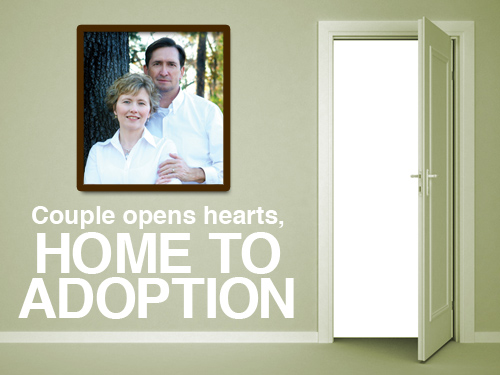 SAND SPRINGS—Al and Christine Shasteen are like many Oklahoma couples who hold down jobs, raise children and go about their business each day. Their path to parenthood, however, is nothing short of extraordinary.

“Our family has grown in its own, unique manner over the years,” said Christine. “Although our oldest child, Lainey, is biological, my husband and I discovered early in our marriage that we both had hearts for adoption.

“We did the research and took the necessary steps which ultimately resulted in us bringing our daughter, Elsah, home from Guatemala six years ago. It didn’t take long for our family to realize that—although she was born in a different country, to different biological parents—Elsah was supposed to be part of our family. God had planned it that way—no question.”

The couple, who are members of Sand Springs, Broadway, took part in the church’s recent “Orphan Sunday” event.

Orphan Sunday was a nationwide initiative on Nov. 6, 2011, sponsored by the Christian Alliance for Orphans and the Cry of the Orphan, “to add a unified voice and coordinated effort to the many worthy efforts that preceded this year.”

“Simply put, Orphan Sunday is one day out of the year, set aside for Christians to stand up for orphans,” said Christine. “(The event) is about raising awareness and opening hearts. It’s about educating people, reminding Christians that God’s children are suffering, even dying, and we are called to take care of them. It’s also about showing the way, helping Christians see how they can be part of the solution. ”

“This was Broadway  Church’s first Orphan Sunday event. Michael Vinson from Children’s HopeChest spoke to the group about opening our eyes to the global state of orphans,” she said. “It was a powerful message. Michael shared with us the truth about the orphan crisis in this world and, at the same time, offered hope as we can all take action and make a difference.”

Representatives from various groups also spoke, such as Dillon International (through whom the Shasteens adopted their children).

“By most standards, our family was complete a long time ago, but Al and I longed for more children,” said Shasteen.

With two boys and two girls at home, everyone, including the Shasteens, expected their family growth to stop there.

“Except that wasn’t God’s plan. God placed Africa on our hearts, specifically Ethiopia. We brought our son, Will, home from Ethiopia in 2010.”

During the adoption process, the Shasteens learned about two girls who needed a family, Ruby and Kate.

“We honestly struggled with this one. Al and I knew these girls were supposed to be part of our family, but we already had a big family. We’d done ‘our part.’ Plus, the girls were older—estimated to both be around 7 years old—and they were both deaf. What in the world was God thinking? In the end, we took that first step out in faith, and God has reassured us at every step since the first.”

In December 2011, the Shasteens flew to Ethiopia to pick up Ruby and Kate, their sixth and seven children.

“We have been given the privilege of parenting seven of His most beautiful children. He allows us to witness to others and to share our testimony. It’s hard to miss us, even in a crowd. Yet we have numerous opportunities to share with both Christians and non-Christians.  Our children are growing up, aware and wanting to take action.

“Al and I never, not even in our wildest dreams, would have imagined growing our family to what it is today—a large family consisting of children from five different countries.”

Yet God’s plans for the Shasteens were bigger than theirs, and He knew their hearts even better than they did.

“Through each adoption, our hearts and eyes were opened wider than before. Looking back, we see how God eased us into where we stand today.

“Through adoption, God has given my husband and me a personal tour of the orphan crisis in this world,” she said.

“We have a true compassion for God’s children who are alone in this world, and we want our fellow Christians to be aware and understand what’s happening, and our responsibility to do something about it.