Cordova preaches from the creek at CrossTimbers 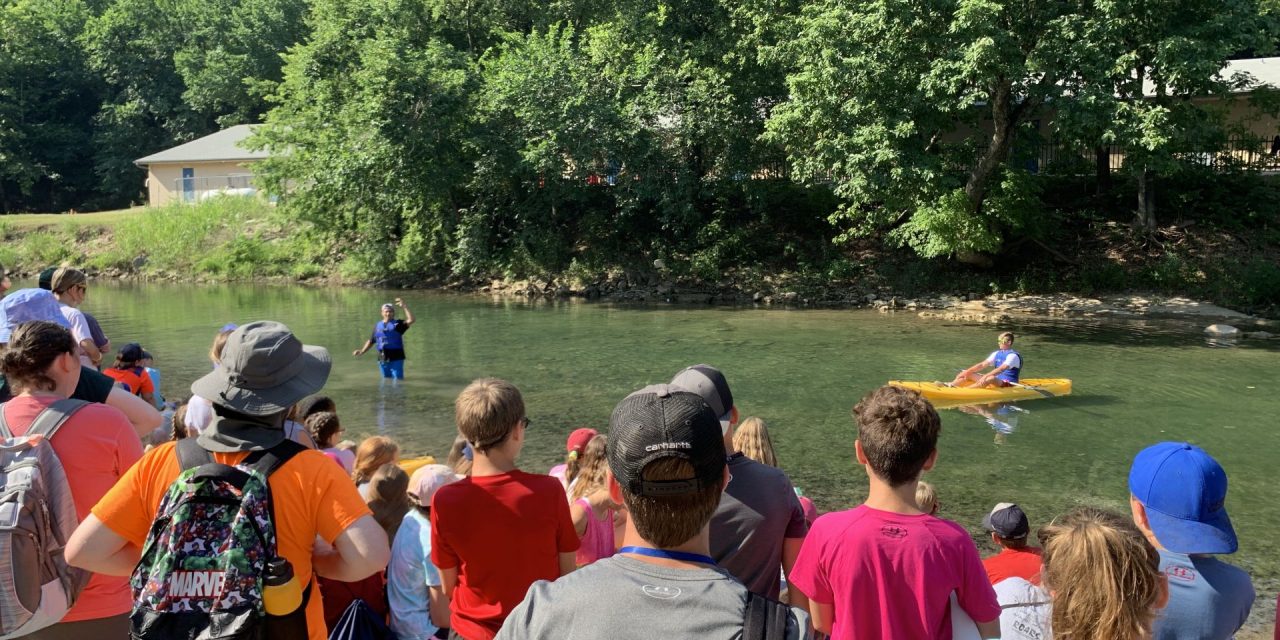 DAVIS—Sharing the Gospel takes creativity sometimes when sharing with children. At CrossTimbers Children’s Mission Adventure Camp, campers who finished grades third through sixth will hear the Gospel throughout their time on the campgrounds.

Even though they may hear the Gospel often, it could take a unique presentation to finally hit home with some campers. That’s what Rick Cordova offered during Session 4 at CrossTimbers Davis. The pastor of Oklahoma City, Bright City brought the whole camp to the creek that runs through the middle of the encampment. With the help of a camp staffer sitting in a kayak in the creek, Cordova spoke how important it is for Christians not to drift, according the Heb. 2:1.

Earlier this year, Charlie Gatton, CrossTimbers program director, met with all the camp pastors in a pre-camp meeting to go over what the summer camp will be presenting, especially the passages of Scripture that will be emphasized.

“Charlie was talking about coming up with creative ways to communicate and how a lot of students learn by seeing,” Cordova said, recalling the prep meeting. “He mentioned, ‘If you want to use a kayak, use a kayak,’ and I thought, ‘That might actually work.’”

At first, Cordova was planning to use mini-pools on stage with some plastic ducks in the water of the pools, having volunteers come up and make waves in the pool. But then, with Gatton’s suggestion, he thought the kayak would be an even better example.

On the last day of the camp session, Cordova worked it out with camp staffers to have the whole camp meet him at the creek. Everybody saw him walk into the water while a staff member was there, sitting in a kayak.

“I had him start upstream,” Cordova said about the kayaker. “He would sit in the kayak as I spoke. I would emphasize with the kids that ‘when you go home, a lot of things will distract you, make you drift away.’ They may say they’re tired and don’t want to get in the Word, or when eating dinner with their family, they may argue with one of their siblings. Little decisions like these can cause us to drift in our spiritual lives. On the surface, everything seems fine. Your faith seems fine, but beneath all of it, you are slowly drifting away.”

As Cordova was preaching, the kayaker would slowly drift down stream. “The timing was perfect in how he would move,” Cordova said. The kayaker wasn’t going fast, but it was obvious to the campers that he was further away from where he was when Cordova started his sermon. “The Lord worked it out so well,” Cordova said.

The sermon continued with campers giving full attention to what Cordova was saying. “It’s easy to get back to the old routine,” he preached. “It’s these tiny excuses like ‘I’ll share my faith next time’ or ‘I’ll go to church next week.’ These little decisions add up, and before you know it, you’ll be in a completely different spot from where you began. In order not to drift, it takes work.”

Cordova said the experience made him think of Jesus teaching the crowds by the waterside, like in Luke 5. He noticed how the water was used to amplify his voice.

“I guarantee you, Jesus’ sermon was a lot better than mine,” Cordova said with a laugh. He appreciated the opportunity he had to preach at CrossTimbers.

Gatton was pleased with how Cordova creatively connected with the campers.

“It was one of those things the kids will never forget,” Gatton said. “Everybody was on edge because it was different. It was a fantastic analogy of Hebrews 2:1 that we have to pay attention and not drift away.”

Gatton said he appreciates all the camp pastors who spend time at CrossTimbers to share the Gospel with campers.

“We have the best camp pastors in the state,” he said. “They are different every year, and they all will bring a fresh view of the verses we are focusing on at camp. Everyone is different, but they all have the same message. It’s like fishing. You have different bait for who you are trying to catch, but the hook is always the same.”