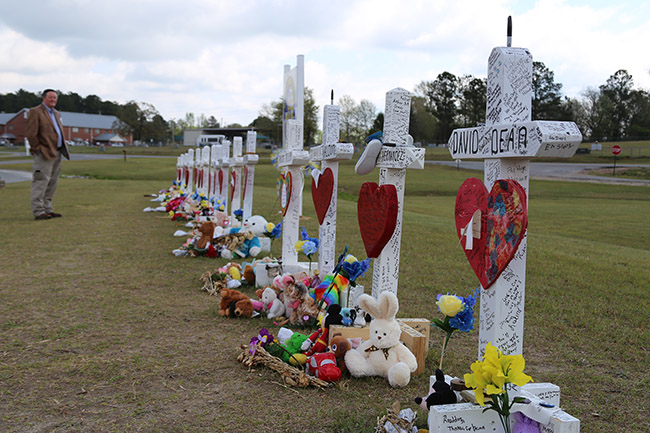 BEAUREGARD, Ala. (BP) — So much more — that’s what the March 3 tornados were to Rusty Sowell. So much more than he ever could’ve fathomed.

He’d heard that tornado’s sound like a freight train, but as he and his wife laid on the floor and an F-4 storm crossed over their house, he said it was so much louder than a freight train could ever be. 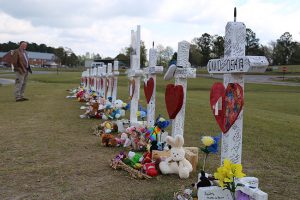 Pastor Rusty Sowell reflects on the crosses still remaining on the lawn of Providence Baptist Church in Beauregard, Ala., in memory of the 23 people killed by tornados that hit the rural community March 3. Since the storms hit, Providence Baptist has been involved in 24/7 ministry to the “walking wounded” in the area, Sowell said. Photo by Grace Thornton/Alabama Baptist/BP

And it was more deadly than Sowell ever could’ve imagined as he wrapped up church services at Providence Baptist Church that morning, the rural congregation he’s served as pastor for the past 35 years.

“Our fire chief alerted me that there were some serious weather alerts, so we opened up the basement of the church as a shelter for anyone who wanted to come,” Sowell recounted.

People lined up. A Providence Baptist team trained in disaster response began registering people as they entered, including one church member who had gone home from church with her grandchildren, then thought better of it and drove back to the church basement.

In the end, there wasn’t time to register everybody — church members had to just throw open the doors and get everyone inside. One tornado dropped, then another as more than 80 people huddled there and the Sowells laid on the floor of their home.

“I had no idea at that point that so many people were gathered at the church,” he said.

But minutes later as the air cleared and the phone calls came, he found that out — and a lot of other information. People had died, and first responders — including Sowell’s son — were searching for the missing.

The church member who had turned around and gone back to the church — her house was totally gone.

“We know of several like that who went home after the storm and their properties were totally destroyed, so we feel like lives were saved that day,” the pastor said.

Sowell was one of them — homes all around his were destroyed too. He sees every day since March 3 as a “bonus day,” one he might never have had if things had been slightly different.

He’s reminded of that each day as he drives by the 23 white wooden crosses on the lawn of Providence Baptist, with notes written on them to memorialize loved ones lost in the community.

“We realize our humanity and that life can change on a dime. It has,” Sowell said. “I’ve seen grown men cry — me included.”

A couple of weeks ago, as more thunderclouds rolled in and rain splashed the 23 wooden crosses on the lawn, people came flooding to the church’s basement again, begging to get in.

The trauma is “still so fresh,” Sowell said. “Time is a great healer but it doesn’t come fast enough.”

But where time has been slow, he said God has been right on time — to the point that church members are still shaking their head in disbelief. 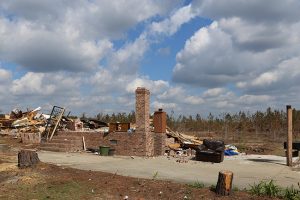 A set of stairs and foundation is all that is left of this house hit by one of the March 3 tornados in Lee County, Ala. Two massive tornados swept through the area that day, killing 23 and causing catastrophic damage that left many survivors without homes. Photo by Grace Thornton/Alabama Baptist/BP

Back in 1995 when Hurricane Opal’s path traced across Lee County, the church was “dead in the water” for a few days, Sowell said. They didn’t have power, and they didn’t have any resources to do ministry in the community.

So in the years after, when they built the church’s west campus on the other side of the road, they built the building with disaster in mind. Though it’s big enough to house worship services, it’s got other intentional features as well — like massive shower and restroom facilities, a large commercial kitchen and a huge diesel generator.

And now 24 years after Opal, Sowell said the church is confident God saw this coming.

“There was a moment a day or two into the tornados that as clothes were stacked head high and the room was filled with supplies, toiletries and water that we looked around and said, ‘You know, this is what this building was built for,'” he said. “We began to look back and see the hand of God every step of the way. It’s just humbling.”

And God provided the team too, Sowell said. One church member ran a trucking company and knew how to get things they needed, plus how to organize shipments as they were coming in from generous donors across the country. Another church member had experience running a commercial cafeteria. Still another was Toni Long, the Tuskegee-Lee Baptist Association disaster relief coordinator who was able to organize cleanup efforts after the storms.

“We had key people in our church that God brought through the years,” Sowell said.

Another was David Dismukes, whose father Robert was pastor of Providence Baptist until he died in 1984. Dismukes grew up in the community, served in public affairs in the Army and recently retired back to the area.

“He knew how to handle all the media and logistics,” Sowell said.

As Dismukes drives around the area these days, people know his truck. He’s personally visited with the families of every victim. As he goes down the list of crosses, he can tell their stories.

The first, Marshall Grimes, was a member of the Christian Motorcyclists Association.

“I went back and found him on Facebook, and after the first tornado rolled through, he posted on his wall that he had made it through just fine,” Dismukes said. The second tornado took his life. 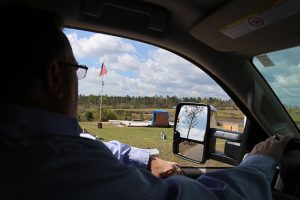 David Dismukes, a member of Providence Baptist Church, who has been helping with post-storm community ministry, points out the lone brick wall still standing at a house hit by one of the March 3 tornados. A family was huddled behind the wall praying when the storm hit. All survived. Photo by Grace Thornton/Alabama Baptist/BP

Another victim, a small child, was missing the night of the tornado, and Dismukes was called to join a search party. Before he was able to get out the door, he got the call that they had found the child, who hadn’t survived.

“Seeing them carry in the body bags, especially the small ones, is the worst part,” said Dismukes, who along with Sowell — also a longtime volunteer firefighter and hospital chaplain — worked at the first responders’ staging area the night of the storms.

As a chaplain, Sowell said, “When we’re called in, it’s trauma; it’s tragedy. But this one has been harder than all of them.”

It’s been a tough struggle, he said, but the church is learning to praise God in the valley and lean into their faith.

“A lot of people are still walking around shell-shocked, thinking they might wake up and it might be a bad dream,” Sowell said. “But it’s not. It’s been a real dark moment, but there have been glimmers of light all the way through this.

“God has taken care of us and we’ve tried to do our best to take care of everyone, and I think that’s been a witness to the community of hope and love.”