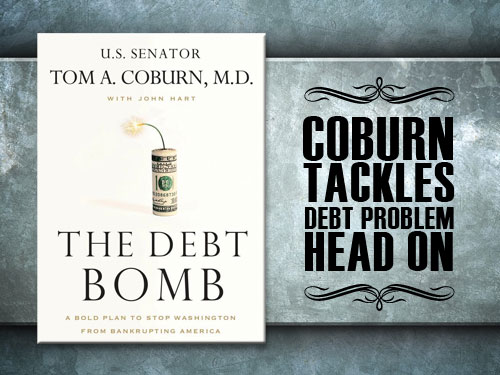 The Baptist Messenger recently interviewed U.S. Sen. Tom Coburn on its weekly Messenger Insight podcast, which is available for free download in the iTunes store and at BaptistMessenger.com.

Baptist Messenger: I am thrilled that you have written an important new book called The Debt Bomb: A Bold Plan to Stop Washington from Bankrupting America. What prompted you to write this book on this topic at this time?

Sen. Coburn: It is a critical time in our nation’s history. Our biggest threat is not the Taliban or Al Qaeda. It is our debt. The purpose of the book is to explain to people how we got here—the bad habits that got us here—and to give them some hope on how we can get out of it.

What this really means to the individual nearing retirement age—and we don’t fix this problem—is whatever you have for retirement is not going to buy what you thought it would buy. Because what we have is a concept of financial repression where the government prints money. The value of that money lessens, and your purchasing power declines.

Messenger: You are absolutely right, and I appreciate your bravery for pointing this out. It is not a popular notion to say we have a recipe for disaster and we could face economic collapse like we have never seen. In fact, in the book’s introduction you say, “We could face a sudden economic collapse worse than the Great Depression.” I think it will take shocking statements like this, which you back up with research, to wake everyone up to these harsh realities. Was your purpose to sound the alarm in addition to provide solutions?

Coburn: It was both. I describe in the book what (I believe) is the biggest problem in Washington. It is the Republicans and Democrats (both). We are now $16 trillion in debt. The only way you can get $16 trillion in debt is to have a Congress that approves budgets that allow you to do that. Well, the Congress over the last 20 years has been controlled by both Republican and Democrat administrations.

We have seen the problem grow. It has not gotten better. The problem is career politicians who continue to vote for their reelection rather than for the best interest of their country. So they’re conflicted. They’re human. They are great people, but they tend to think short-term about their next election. So what we really lack in Washington is people of real-world experience—not political experience.

We also lack people who want to get into the political fight. This is a bruising “sport.” You get accused of all sorts of things. Your family and your diseases—and everything else about you—is public knowledge. And a lot of people, who have a lot to offer, have failed to jump into the fight, because they do not want to pay the price of losing a certain anonymity. And we need them.

Messenger: Excellent point. Spoken just like a medical doctor. I think you not only diagnose the problem in just the right way, but also offer solutions. The other Oklahoman I have heard talk about the problem with the same force is J. Rufus Fears, who is a history professor at the University of Oklahoma. He talks about declaring war on debt and points out some of the same historical examples you do: Britain, France, the Ottoman Empire, the Roman Empire, who declined economically and had problems with debt as well. Now, I was very interested in this illustration of a debt bomb. Can you talk about that?

When this happens, it’s going to happen overnight. Things continue as they are until they don’t. If interest rates were to change back to our historical average, that would add $650 billion a year into the budget, just in interest. That is more than we spend on defense and every discretionary spending program. That is where we are at risk. As soon as the world’s confidence in our ability to repay goes, we are flat out of luck. What happens then is that we are going to be Greece. The people who are loaning us money are going to tell us what to do.

Messenger: Senator, is there a moral component to all this?

Coburn: Sure, let’s think about what we have done in our country and the immorality of it. We have lived the last 30 years off the next 30. In other words, we have borrowed money that is going to have to be paid back. Now who is going to pay it back? At 64 years of age, do you think I am going to pay it back? No. So, the moral component is that we are stealing opportunity from our children. It would be just like you telling your children, “I am going to live my life. I am not going to send you to school. I am going to do what’s best for me, but not what’s best for you. And, by the way, when I get through, I am going to leave you the bill for everything I did.” I used to worry about my grandkids. I am now worried about my kids and me, on whether or not we can accomplish this.

The one thing I want everybody in Oklahoma to understand is that there is not a problem in front of us we can’t fix. What we lack is leadership and a frank conversation with the American people about the severity of our problem. Most politicians won’t stand up and say, “Hey we’re broke. You are telling me you want the government to do more, and I am telling you the government is going to have to do less. All of us are going to have to come together and solve this together in a fair and equitable way.”

Messenger: I think some people, because of works like yours, are starting to wake up. So often the conversation revolves around should we or shouldn’t we have this program. Today, it is based on can we or can’t we afford it?

Coburn: There’s actually a bigger question. If you look at our Founders, and read the Federalist Papers, we are so outside the limited government our Founders set up. We have come to the Federal Government and said, “Do this.” But if you read the Constitution, especially Article I, Section 8, which is the Enumerated Powers, there were very limited powers given to the Federal Government. The rest belongs to the states. What we have done is usurp that power.

The Supreme Court decision related to “ObamaCare” is so important. Because of the violation of the Commerce Clause intended in our Constitution, if “ObamaCare” is not struck down, there is no reason to have states anymore, because the Federal Government has said we can move in any direction, on any issue, at any time, and we can tell you what to do. So this expansion of the Commerce Clause, and the lack of slapping it down in the past by the U.S. Supreme Court, has created a government that is far outside its bounds.

But it’s also made us weaker, because it created dependency. Dependency is a form of tyranny, whereas earned success is happiness. We have gotten those confused, and we have created a situation in which people feel entitled. I have talked to five or six employers in Oklahoma in the last week, ones who want to hire people. People have come to them and said, “I don’t really want the job until my unemployment has run out.” But they are checking the box so they can stay qualified for unemployment.

So we have an unemployment system that encourages people not to work, rather than one that encourages them to work. There is a great book your readers need to read, by Marvin Olasky. It’s called The Tragedy of American Compassion. He outlines the history of how you really help somebody instead of making them dependent. You don’t do that through the Federal Government. You do that through churches and communities where you hold them accountable with some personal responsibility. We have gotten totally away from that. Do you realize we have one in 18 people in the United States now collecting a disability check? Do you really think one out of 18 people you see is disabled? Forty percent of it is fraud.

Messenger: What makes Oklahomans so proud of you is that you speak the truth and are more than a politician, but are a statesman. We encourage all of our readers to read a copy of The Debt Bomb. Sen. Coburn, thank you for writing this work and for constantly representing us so well.

Coburn: Glad to visit with you. Blessing to you.