Clemson’s Lawrence shines on and off the field 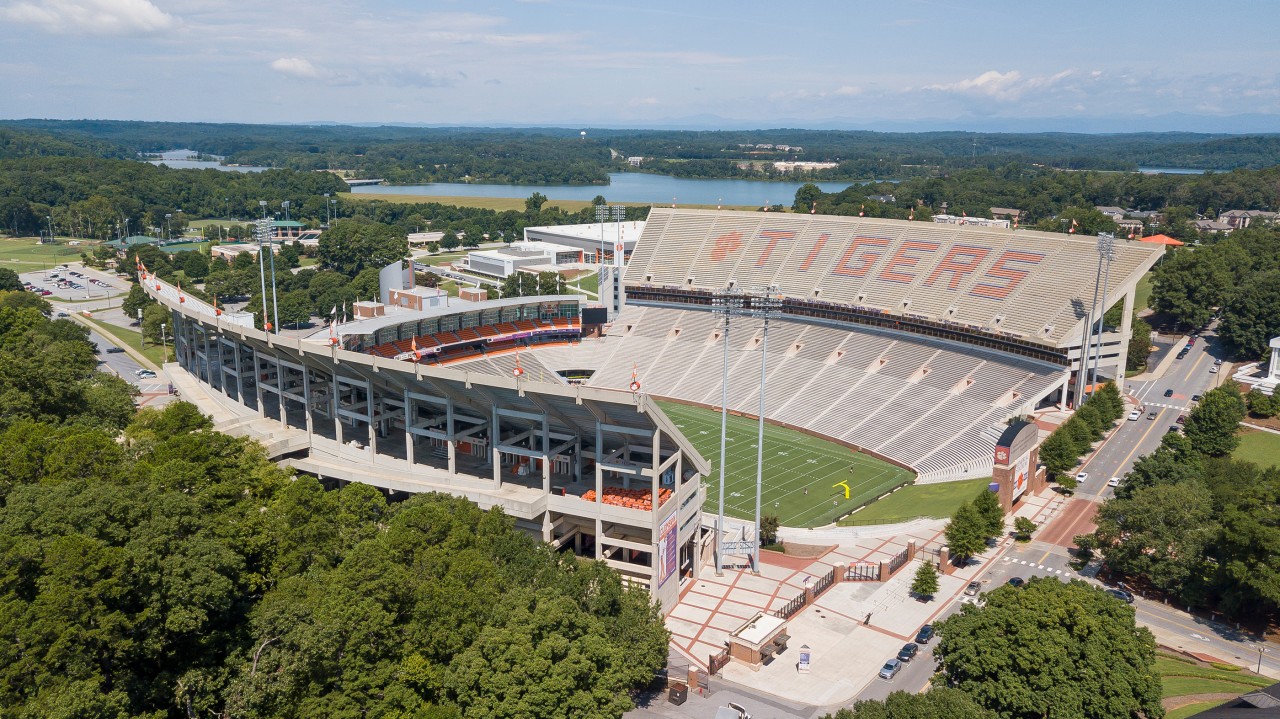 **Editors Note** Article reposted from www.christianindex.org. The original date of publication was January 8, 2019.

DULUTH, Ga.,—For other Cartersville residents and I, it was surreal to see Trevor Lawrence, a kid who had just been known around town as “Trevor” since he was 15, on the national stage. It shouldn’t have been. 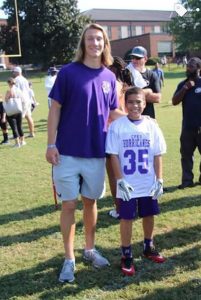 On a muggy August morning after a game the night before, Trevor and other Purple Hurricanes posed with players in the Cartersville Parks and Rec Department, including the author’s son. SCOTT BARKLEY/Index

Over four years we saw his talent at Cartersville High’s Weinman Stadium, the spirals thrown at ridiculously impossible angles with equally ridiculous velocity. Fans of the Purple Hurricanes became used to 42-0 leads halfway through the second quarter. In 2017, his senior year, Trevor and the Canes led Calhoun – a team that would later that year win the Class AAA state championship – 56-0 at the half.

So when the kid many call “Sunshine” after his resemblance to the character from the movie “Remember the Titans” shone so brightly on the national stage against the favored Alabama Crimson Tide, many of us weren’t surprised.

Something I do take note of regarding these young athletes are how they handle the spotlight away from the field. Keep in mind that Trevor is 19 years old. Last year’s National Championship also had a lot of young guys featured like Jake Fromm and Tua Tagovailoa.

Their small towns can be a fishbowl. Get out of sorts publicly in any way, even for a moment, like teenagers do and the talking can start about how you may be a good athlete, but “let me tell you about his attitude.”

I remember a hot, steamy Saturday morning in August 2017. Cartersville had played a big game the night before against Allatoona. A two-hour minicamp for football players in the Carterville Parks and Rec Department was being held at CHS, requiring Trevor and many of his teammates to be there by 8 a.m. At the end of it Trevor was bombarded by parents – yours truly included – wanting a picture of him with their sons. I was impressed by the way he stayed for every last one without a hint of being held up or inconvenienced.

Credit goes to the parents and churches (The Lawrence family are members of Tabernacle Baptist Church in Cartersville) at times like that, but it can’t be overstated the influence of their coaches. As a fellow member of Cartersville First Baptist, I’ve heard Trevor’s high school coach, Joey King, share his testimony with our men’s ministry. Clemson’s head coach, Dabo Swinney, is such a tremendous man of God that it’s tough finding someone better I’d want my sons playing under.

Trevor is one of the rare teens to stay off Twitter. His most recent post is from July 12. Still, it offers a look as to where his priorities lie:

Take note of that post’s retweets and likes. That’s influence, and it begins with the adults around our young people. Without that guidance and the rudder Scripture provides, they’re likely to drift into other areas. 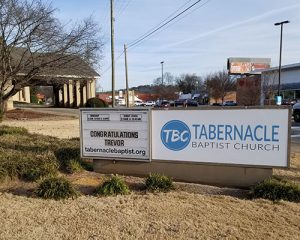 Tabernacle Baptist in Cartersville, where the Lawrence family are members, showed its love for Trevor on the church sign. SCOTT BARKLEY/Index

For all of you coaches out there, thank you. I was a high school assistant coach and know the paltry stipend you get doesn’t come within a galaxy of the amount of time you put in outside the classroom. You mentor and counsel; you address parents who have an inflated view of their child’s athletic ability; you sacrifice a lot of time away from your family. As I learned, coaching is just the thing you get to do in addition to all of that.

This goes for you too, volunteer coaches. You may not know the first thing about soccer, but someone said if you don’t do it there might not be a team. So, there you are on the sideline with a whistle and 14 faces looking at you for direction. I’ve been there, staying up late on a Friday night sweating over a lineup to make sure playing time is as evenly distributed as possible among a group of ten-year-olds while still giving you the best chance to win.

No, odds are the results of your influence won’t play out in front of a crowd like the one watching the National Championship game. In all likelihood, though, they will carry just as far.

It could last generations, even, from when you shared the Gospel with a child in Vacation Bible School or led a discipleship group with teenagers. And as we all know, that’s the brightest light to shine.