Alex, Southern goes ‘All in’ during December revival 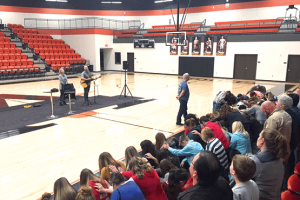 ALEX—Decembers are typically a busy time in church life. From Christmas music programs to special worship services to outreach efforts, most churches are not lacking for activities this month.

Yet one Oklahoma Baptist pastor felt led by the Lord to add one more major undertaking for his congregation in December 2018. That pastor is Tim Carr of Alex, Southern, who believes God was urging him to hold a week of revival events.

The idea for the events, though, came to him almost a year before it came together while he was on an overseas mission trip with other pastors, including Jeremy Freeman of Newcastle, First.

Carr shared that God gave him a vision to hold revival events in the town of Alex, which has a population of approximately 550, and Freeman recommended that Carr call on his father Ken Freeman, a renowned Oklahoma revival preacher who has led countless evangelistic events, including ones targeted to youth.

From that conversation forward, God only expanded the vision and plans.

“I believe God was calling us to pray for and work toward revival events in Alex, which is a relatively small town,” Carr said. “Because of God, what came together was much larger than what I could have ever envisioned. We ultimately had churches from Bridge Creek, Ninnekah, Maysville and other areas on board, as well as our director of missions, Tim Russell in Grady Association.”

The congregation of Alex, Southern, which runs about 100 people on an average Sunday, began praying and serving.

“We simply made some flyers,” he said. “ With the help of our youth, we distributed some 1,000 flyers door to door.”

All of these efforts culminated in a half-week of events that began on Sunday morning, Dec. 9, at Alex, Southern. Ken Freeman preached, and there were 15 professions of faith in Christ that morning service alone. During the evening service, more came forward to make spiritual decisions.

Monday evening’s event focused primarily on prayer and seeking a move of God.

On Tuesday, Caleb Freeman, the teenage son of Jeremy Freeman who miraculously survived an automobile accident in December 2017, spoke. Caleb shared how God saved his life and how the Lord has helped him on his difficult road to recovery. Seven people made professions of faith at that service.

The culminating event took place at Alex High School in the gymnasium. Thanks to local public school leaders who allowed the event to be hosted there, Carr, Freeman and all those involved had a place.

“The Alex School District has a new gym with a jumbo screen, really first class,” Carr said. “I felt the Lord showing me that we could fill this gym with people and share the Gospel.”

Churches and schools from the surrounding areas brought students, and more than 400 were in attendance.

“Ken asked the students a powerful question. ‘How many of you are from broken homes?’ and how many were estranged from their parents,” Carr said. “That’s when many kids in the room raised their hands. These young people were crying. We know they need Christ, and we know these kids need the church to be what the church needs to be for them.”

The event leaders embraced the brokenness as opportunity for the Gospel, and during the invitation that evening, many students came forward. “Out of the school event alone, we had 40 spiritual decisions; 29 of which were professions of faith,” he said.

After people made decisions for Christ, Ken asked people to come down. They literally filled the basketball court, at least 100 people on the basketball floor praying.
Carr, who is a farmer as well as pastor, thanks God for the spiritual harvest.

“Our people got on board,” he said. “Other people and communities helped in every way possible. We prayed, and God did what only He can do.”

All told, the Alex revival events brought forth a harvest of 100 spiritual decisions. The churches will be doing follow-up with all those who made decisions.

“The main thing now is to disciple these new believers, especially the teenagers. That falls on the church,” he said.

Carr believes the Lord can bring revival anywhere, if people will look to the Lord.

“Our God holds everything. It’s all His. Small church or big church has nothing to do with it. It’s about how willing we are to get on our knees and seek Him,” he added.