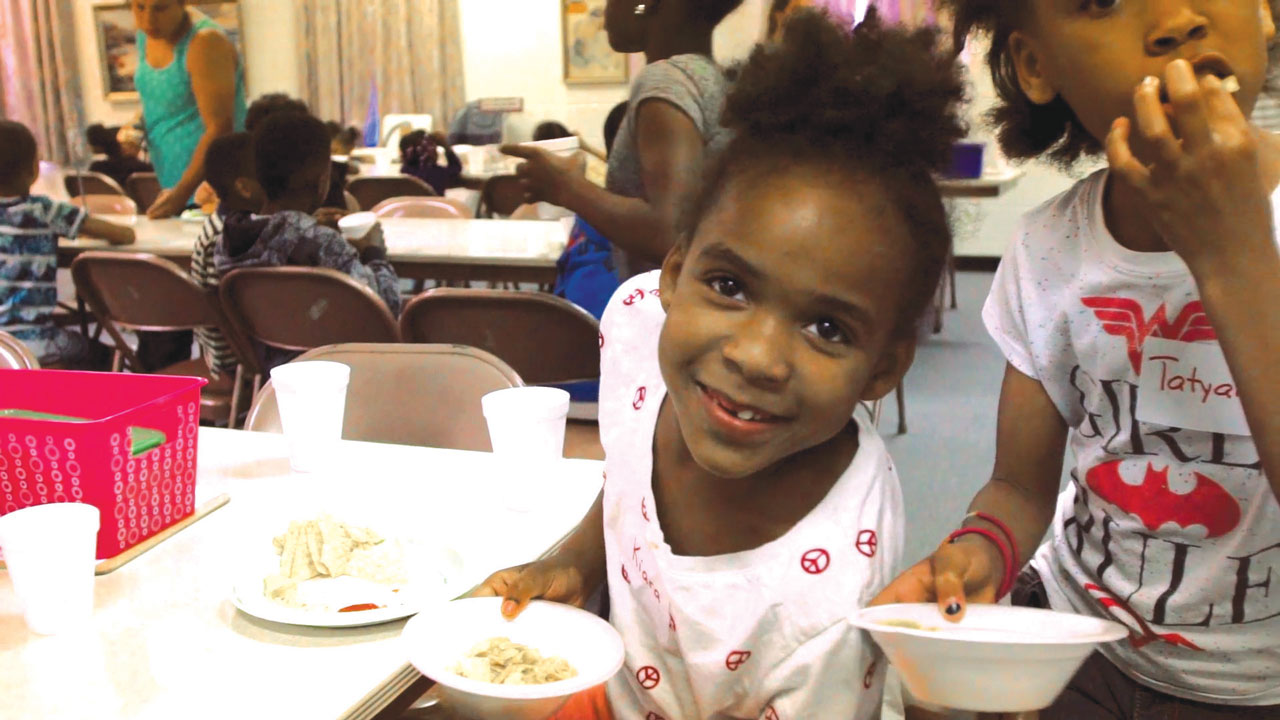 Roughly 20 percent of the population in Oklahoma is affected by food insecurity. What does that mean? “Food insecurity” is a term used to describe a situation in which a person does not know from where their next meal will come.

Through the Edna McMillan Oklahoma State Missions Offering (SMO) Hunger Fund, however, churches like Oklahoma City, Mission OKC are doing their best to change that number, one meal at a 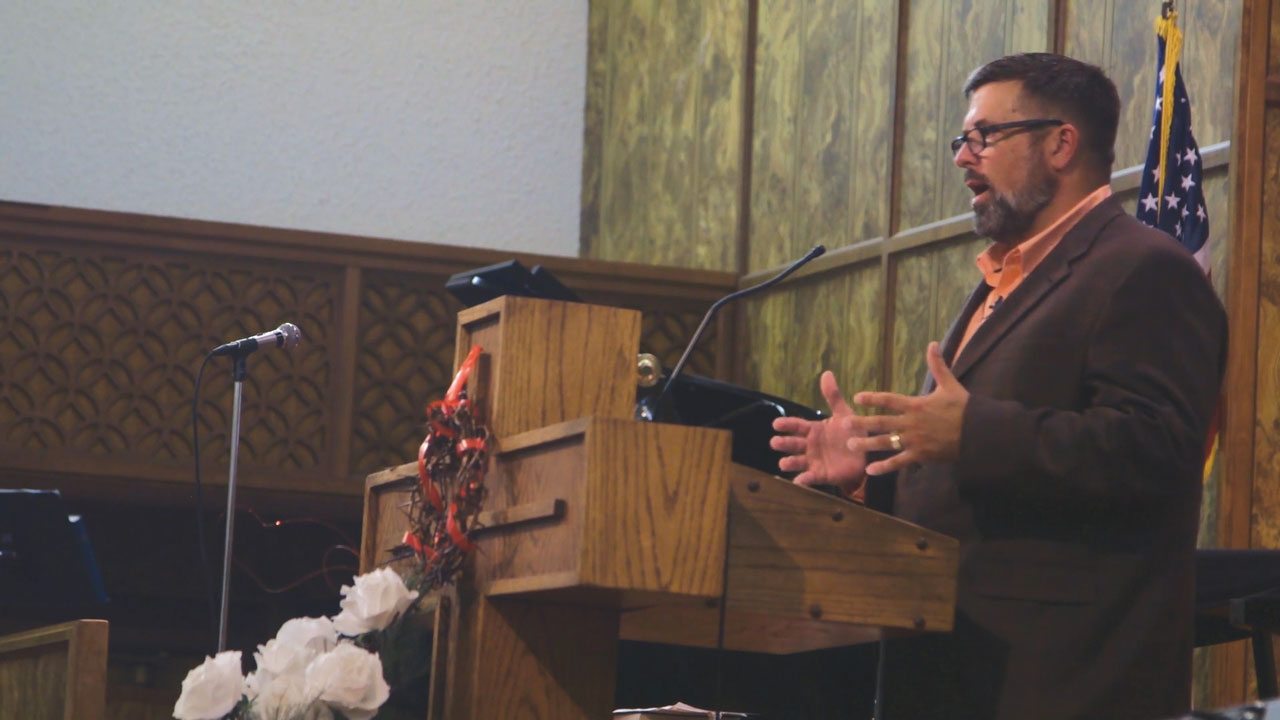 Chad Clement, senior pastor of Mission OKC presents the Gospel from behind the pulpit.

Chad Clement, pastor of Oklahoma City, Mission OKC, a church plant, recognized the growing need of hunger among children in the city. Chad and his wife Anna are able to feed thousands of children who might otherwise go without a meal, using the SMO Hunger Fund as a springboard to share the Gospel.

“We work with families in low income apartment complexes across Oklahoma City. Our philosophy is that if you go out and meet the felt physical needs of people in poverty areas, they are open to the Gospel,” Clement said.

In 2000, Clement, a former Marine and stockbroker, surrendered his life to serve the Lord in urban missions. He has been serving at Mission OKC for five years now, along with his wife Anna. They started the church plant in the living room of their low-income apartment.

“In a population where you have a lot of single mothers, they are really wondering ‘Does anybody see me struggling?’” Anna said. “Their kids are hungry. Many of them were used to only one meal a day. So we were in a place where we were wondering, ‘What is it going to take to reach this community?’ Well, their kids are hungry.”

Anna has served as an urban missionary and church planter in Texas and Oklahoma for 20 years. She now serves as a helper to her husband and director of education at Mission OKC.

The SMO Hunger Fund provides resources for food pantries through local churches or associations, helping provide things like backpacks for children, after-school hot meals for children and their families and more.

“Once people are fed, we are able to present the plan of salvation. It’s like Jesus’ example where he went to the top of the hill. He fed them, and then he taught them,” said Don Williams, disaster relief/chaplaincy specialist at the Baptist General Convention of Oklahoma.

By meeting physical needs like hunger, church planters like the Clements and many others can address the spiritual needs. According to Williams, with funds received from the SMO last year, half a million meals were served, with an estimated 50,000 hearing the Good News. 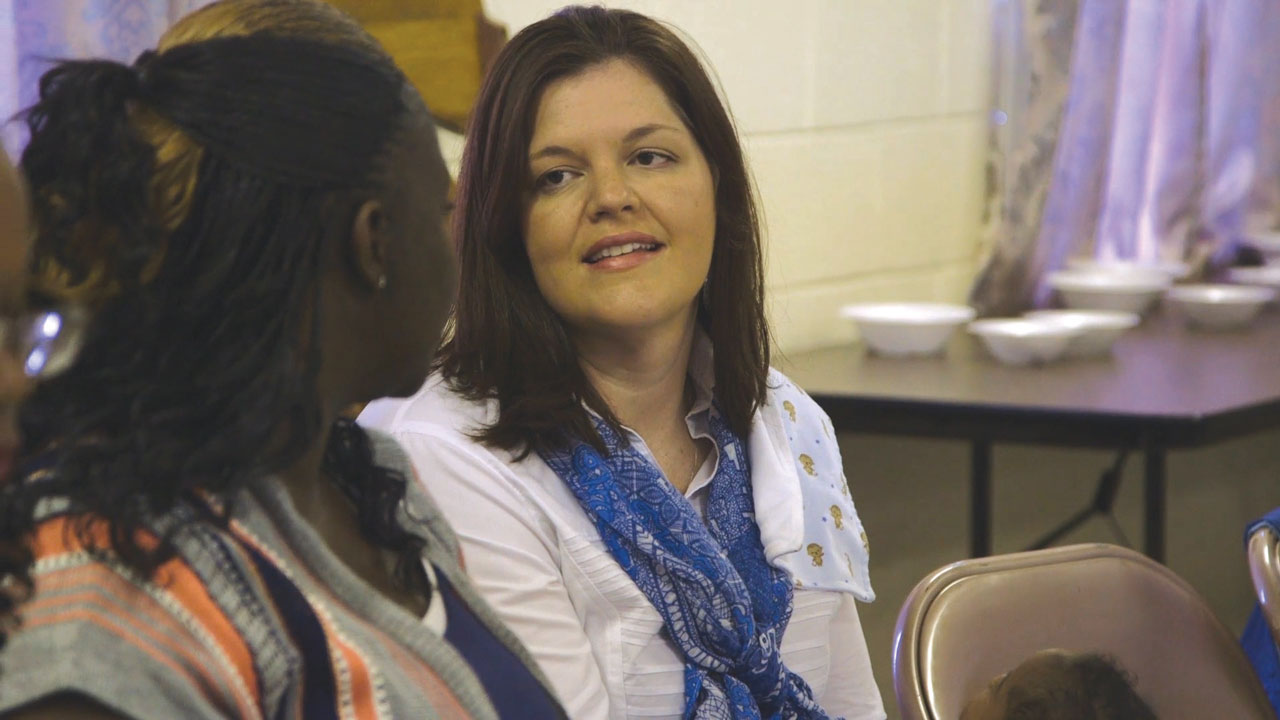 Anna Clement speaks with a mother at dinner.

“We’re committed to be here and provide,” Chad said, “but our Sunday offering one day was $1.50. As a new church plant, we contacted the BGCO and told them that we are feeding kids in the neighborhoods, and immediately we started receiving State Missions Offering Hunger Funds.”

While the SMO provides added funds to churches and ministries that feed the hungry, Williams emphasized that volunteers are needed to keep programs running smoothly as well as support from the church itself, referencing that, biblically, the church is called to take care of widows and orphans in their time of need.

Those interested in giving to SMO can be sure their generous offering will be used directly by churches like Mission OKC. “The hunger funds go directly into providing hot meals to kids all year long,” Chad said, “and it’s been a tremendous help to us in being able to take the Gospel to these neighborhoods.

“We had close to 300 decisions to Christ in our first six years of ministry here at Mission OKC, and we see that continuing to grow exponentially as we partner with more churches and reach greater areas of our city.”

One Scripture passage Williams cited as a reason to give to the SMO is Ephesians 4, “It says we are all called, and as Christians, we need to figure out what God has called us to do, and as far as we go, we need to be the hands and feet to the world.”

“I hope people understand, when God impresses upon them to give to the SMO, He has missionaries waiting on that provision. And as you give generously, we’re giving our best,” said Anna.