Churches Encouraged to S.T.O.P. and Pray 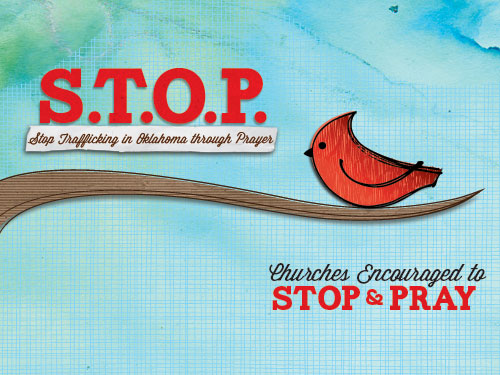 When an email invitation came across her desk in the summer of 2009, little did Kelly King, Baptist General Convention of Oklahoma (BGCO) women’s specialist, know her response would initiate a new passion and direction for the ministry she oversees.

“I had no idea how someone got my name, but I was invited to attend an FBI task force meeting on Human Trafficking in Oklahoma. I knew national Woman’s Missionary Union (WMU) had adopted human trafficking and exploitation as its critical issue, but there was so much I still needed to learn,” said King. “I knew the issue was rampant overseas, but I was floored when I watched an FBI video showing footage of a truck stop on I-35. After attending that particular meeting, I was determined Oklahoma Baptists could make a difference.”

Since that time, the awareness of human trafficking and exploitation has exploded. College students raised more than $3 million at a Passion conference last year in Atlanta. Awareness at large events, such as the NFL’s Super Bowl, have brought the attention into the national spotlight. Rallies and fundraisers seem to be rampant. And while the awareness and the passion have increased, one question is still asked.

“No matter the audience, there is one over-arching response,” said King. “People want to know—what can we do to stop trafficking?”

This summer, your church can do something. STOP and Pray.

“S.T.O.P. is an acronym for Stop Trafficking in Oklahoma through Prayer,” explained King. “The task force from the women’s office felt like we could ask pastors in our state to take a moment on Sunday, June 24, and collectively pray. While many people see trafficking and exploitation as a social issue, it is honestly a spiritual issue—and it’s happening in our backyard.”

Why Oklahoma? The history of human slavery includes a common factor—trade routes. In 2010, the U.S. State Department listed Houston, Las Vegas, Atlanta, Kansas City and St. Louis in the top 10 of cities where child sex trafficking occurred. Considering Oklahoma’s geography and the trucking industry along I-35, I-40 and I-44, Oklahoma is vulnerable to traffickers.

O.A.T.H. (Oklahomans Against Trafficking Humans) reports that a lead officer for the state’s trafficking task force accounts more than 100 child sex trafficking cases were being investigated in 2010 in Oklahoma. They also share on their website that the FBI’s Innocent Images, ICE Cyber Crimes, OSBI Internet Crimes Against Children and the Oklahoma City Police Predator Unit report multiple cases around the state occurring in almost every county. *

“We are definitely calling on our churches to pray specifically on June 24, but we also knew that a powerful story would help people understand the issue,” said King. “Because we didn’t have specific funds to produce a video just for STOP Sunday, we looked at one of the State Missions Offering allocations, and how they were addressing the issue of trafficking.”

A video highlighting the ministries of DaySpring Villa was produced for churches to show to their congregations. Jeannetta McCrery, a former victim of trafficking, now works at the faith-based domestic violence shelter. Her story and the ministry of DaySpring will be featured in this year’s State Mission Offering, but is available now for churches to view on June 24.

“Jeannetta’s story is one of heartbreak and yet, full of God’s healing,” said King. “Because DaySpring was recently approved by the Attorney General’s office as the first program to offer services to adult victims of human sex trafficking, and they are in the process of developing specific housing for victims, we felt it was important to share this story.”

To view the video and to download resources your church can use on STOP Sunday, visit the website at bgco.org/women.