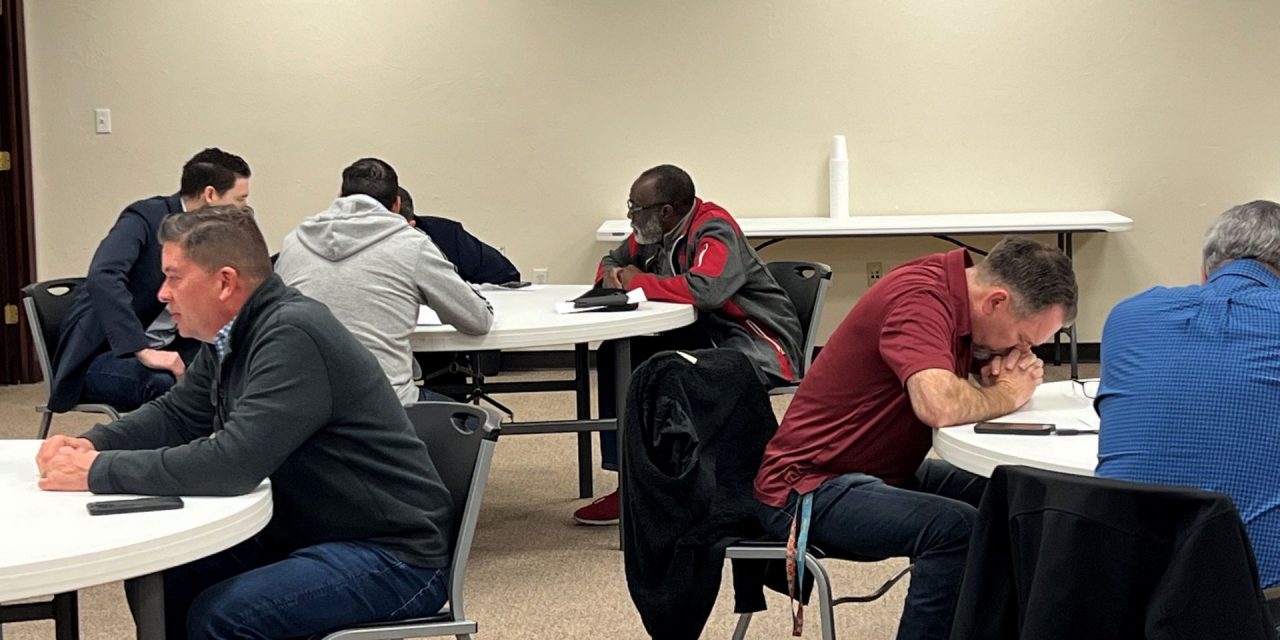 Above: Pastors gathered to pray for Ukraine at Capital Association’s offices

“Thank you for your prayers. Keep praying!” 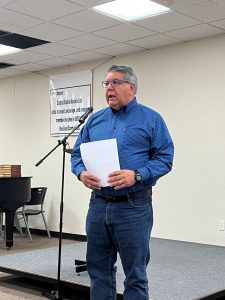 Walter Mullican gives a report on the conditions in Ukraine during the prayer meeting.

This message was sent to many Oklahoma Baptists who have served on mission teams in various places in Ukraine over the years and have remained in contact with acquaintances made in that country. Updates came from Ukrainian brothers and sisters in Christ via cell phones and social media, thanking them for praying and asking for more prayers.

“We are grateful for your constant support. We definitely feel that,” a woman said via Viber, a popular social media platform in Ukraine. “It’s like everything you read about that happened to David in the Psalms is coming to life here.”

The woman, hunkered down as bombs were exploding near her home, referenced Phil. 4:7 in her video message to a friend. “We know your prayers,” she said. “We feel them physically. Personally, like so many people, I worry from time to time. But other times He gives like this ‘weird’ peace that comes from nowhere—that comes from heaven. Your every prayer helps us to be cool-headed and calm. Pray for continued wisdom in making the right decisions.”

A group of nearly 25 pastors gathered in Oklahoma City on Feb. 28 to pray for Ukraine in an impromptu prayer meeting hosted at the Capital Association (CBA) offices.

“I felt an urgent need to call our pastors to a special time of prayer this morning,” said Mark Walters, associational missions strategist for CBA. “Hearing their prayers, I heard heartfelt intercession for the people of Ukraine who are caught in the midst of the battle, as well as for the safety of the refugees who were fleeing to safety in neighboring countries.”

Walter Mullican, a transitional pastor in Oklahoma, has served as a missionary multiple times in Ukraine, and he gave a report at the CBA prayer meeting.

“We are getting real-time reports directly from Ukrainians of things that are going on. They are telling me, ‘I’m hearing the bombs outside my window,’” said Mullican, who recently retired as pastor of Oklahoma City, Portland Avenue. “I’m hearing from my contacts in the country primarily through social media channels. They still have internet, and the phones are still up.”

Mullican visited Ukraine last fall and had continued to lead online English classes and Bible studies with Ukrainians up until the beginning of the war.

“The one thing that I keep hearing from my Ukrainian friends, both believers and non-believers, saying is, ‘Please don’t quit praying for Ukraine,’” Mullican said. “We have a tendency that when something is trending on social media, and we have a hashtag that we’re going to pray. And then when it calms down, and you don’t hear about it as much, we move on to the next thing.  We need to be faithful in our praying.”

Todd Fisher, executive director-treasurer of Oklahoma Baptists, also agreed. “I encourage Oklahoma Baptists to take time in our worship services, Sunday School classes and small groups to pray for all affected in Ukraine and especially for our brothers and sisters in Christ there.

“I have directed our staff to develop a landing page on the convention’s website to help facilitate communication and provide prayer and mobilization resources from Oklahoma Baptists and Send Relief,” he said referring to the North American Mission Board and International Mission Board’s combined channel for crisis relief and ministry.

“In coming days, through this web page and other means, we will share more specific information about Oklahoma Baptists’ efforts to send support to these churches to help all who are in desperate need in this crisis,” Fisher said.

For a full list of prayer points and information about how to donate to Southern Baptist Ukrainian war refugee relief efforts visit oklahomabaptists.org/Ukraine.