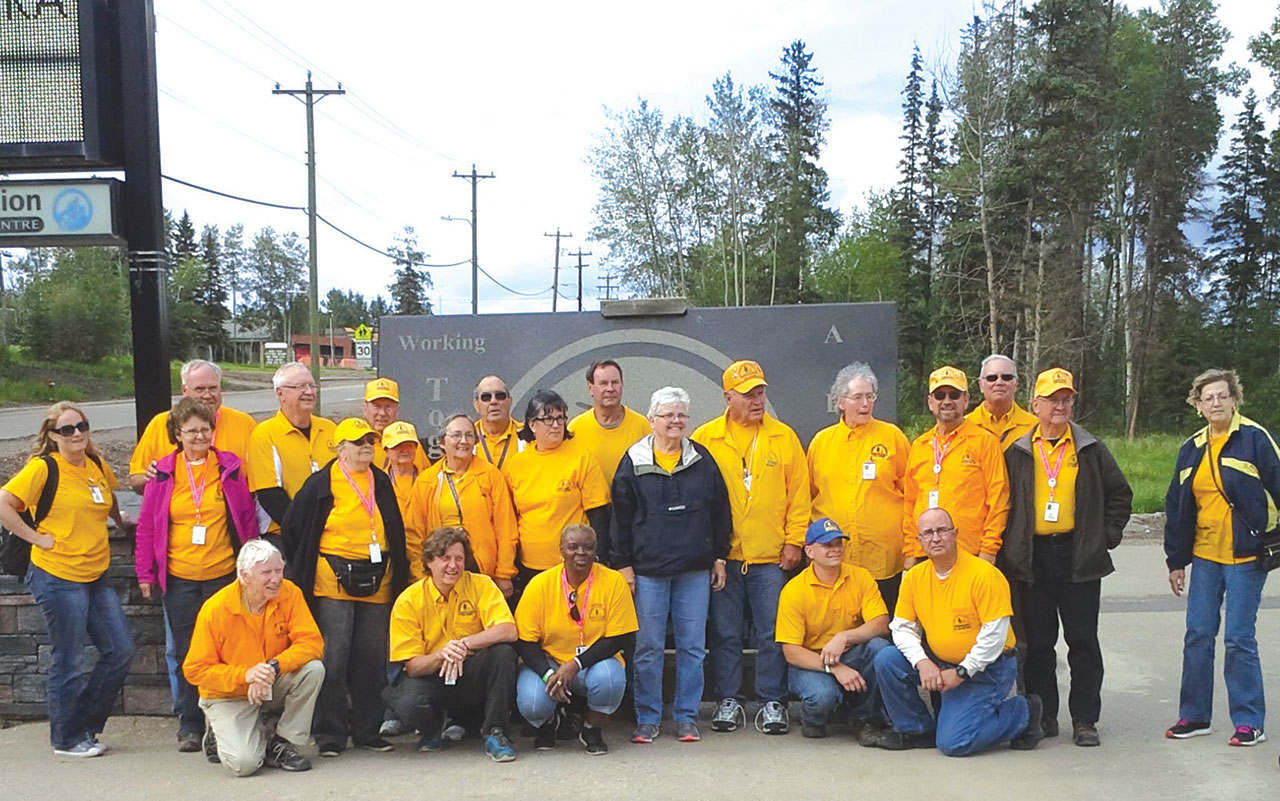 Well, that wasn’t exactly the announcement shoppers at the Walmart in this wildfire-devastated city in the far northern reaches of Alberta heard a few weeks ago, but the open arms, hearts and just as important—listening and empathetic ears—of chaplains from Oklahoma roamed the aisles of the store for a few days recently.

And one with a familiar name—a name sure to bring a smile to just about anyone’s face—was among them: Charlie Brown.

No, not that Charlie Brown! Not the lovable loser of “Peanuts” fame created by cartoonist Charles M. Schulz.

Tulsa native Charzetta Brown, who admitted she shared some of her namesake’s characteristics of being nervous and lacking self-confidence when she traveled to Canada.

“It was a good experience for me to go,” said Brown, who got her nickname from classmates in school. “But, it was my very first call out as a chaplain,” she added quietly, “and it really helped me  . . . ,” her voice fading into silence.

That’s the way it often is with those who make themselves available for service to God. They volunteer to help heal the wounds of others and find their own wounds bound up by the experience. Satan hates a servant heart, and most often creates a wall of impediments to keep a willing heart from following through on a commitment.

And the obstacle course he put in front of Brown, a member of Tulsa, New Joy Fellowship, seemed impassable. But, she remained faithful to her commitment to go, in spite of the fact that just before she was scheduled to leave for Canada, her mother passed away, and her home had a water leak under the floors.

“The Canada trip was coming up, and so it (The trip) was something I really needed,” Brown related. “Going to a place where others were experiencing loss; not knowing exactly how I would handle that, but just the thought of taking my mind off of my circumstance and focusing on others.  There’s a healing process in doing that.

“Then, when I was sitting in the bus at the border waiting to get through, I got a call that my brother had died of a heart attack. I decided right then that I would just stay on the bus and turn around and go back home. But, then, I thought, No, the Lord knew these things were about to happen, and yet He sent me. So, I went ahead, because I believed there was something there for me, even though there were all of these unknowns because I had never served as a chaplain before.

“To begin with, I knew no one in our group, other than (Baptist General Convention of Oklahoma Chaplaincy Specialist) Don Williams, who I had seen at chaplaincy classes, but didn’t really know well personally. So, I stepped out on faith, and we got to the welcome center, got our instructions, and I just felt like that was what I was supposed to do—help people as they came in, listen to them talk, and give them a helping hand with whatever they needed to pick up, such as clothing or water.

“It gave me the opportunity as I was walking out to their car with them to see how they felt and to know where they were emotionally and spiritually. A lot of them were so positive in the face of losing everything, and that was helping me get through my losses, too. I knew then, that, with the Lord’s help, I will make it.”

The chaplains at first accompanied ash out teams cleaning home sites, but that didn’t last long.

“When we went to a site with the team, I asked for the Lord to help me,” admitted Brown, who has worked as secretary/registrar at Tulsa MET Jr. High & High School for 15 years. “I asked Him to open my eyes, my ears, and my heart to see and feel whatever it was I needed to do.

“To be able to see the need, to hear, to have it in my heart to know what to say and then when it comes to praying—even though the homeowners had charts of their homesite of where there might be valuables in the ashes, I always asked the Lord for the treasures of their heart to be found. Things that they didn’t think of.

“We did find such things, and I always thanked the Lord when that happened. It was a tremendous blessing to them and to me, too!”

When the ash out opportunities ceased, Williams had to get creative.

“We said, ‘God called us here, what is He calling us to do?’” he said. “So, I thought, where are people going to be? All of their belongings are gone. People had to get food and other stuff, so they had to go to Walmart.

“The chaplains were very skeptical when I dropped them off—I had other things to do—but they made connections with security and the clerks and other people, listened to their stories and prayed with people.”

“I was excited when we got to go to Walmart because, first, I needed some things, too, and that worked into a way for us to share with people,” Brown added. “When I go to the store, I’m usually focused on what I need to get, and I thought that would be the way those people would be, too.

“I wasn’t too sure how us being there would work, because Don told us to just start talking to people. I said, OK, Lord, You‘re going to have to help me with this.  As far as casual conversation, I’m a quiet person. I don’t talk much. I heard the other chaplains, and they were just getting after it, but I said, ‘Lord, are You sure I’m supposed to be a chaplain because I don’t talk like this?’

“I know chaplaincy is a ministry of presence, and I can sit and observe. I sit and watch; that’s how I learned all of my life. Observing how others do things. But, I had some great experiences at Walmart.

“I was looking at spray air fresheners, and a lady came in and grabbed a can. Turns out her house had burned down. I asked how this one freshener smelled, and she sprayed a little. We got to grabbing other scents and spraying a little in the air and running under the mist and laughing together and having a great time.

“She said, it was so nice to find someone like me. We visited for a while, and I waited for the chance to share my faith with her.”

Williams said Brown is a great example of a faithful chaplain-servant.

“That’s the way it is with any disaster. We always tell the chaplains, it’s never convenient to respond to a disaster. If you are led to respond, that means God is calling you to respond. That’s the kind of volunteers we have; Charlie used all of her annual leave to minister to people in Canada she doesn’t know through all of that stuff that was thrown at her in her life.”

Still, Brown had concerns for her home while she was away.

“I was worried about it all the time I was gone, but I trusted in the Lord, and when I got back, I could feel some bumps in the floor, but a plumber had fixed the clog, and there was no major damage,” she said. “I had my mother’s funeral service just before I left. They had my brother’s service while I was away.  But, you know what makes it OK? They were children of God.”

While Canada was Brown’s first call-out as a disaster relief chaplain, she is a seasoned mud-out volunteer, with extensive work in Oklahoma last year through the summer months; not bad for a first-year volunteer.

She also is trained in feeding, chain saw, skid steer, inventory, and child care and is a member of the BGCO’s Medical Reserve Corps.