Breakfast, a backpack and a pat on the back 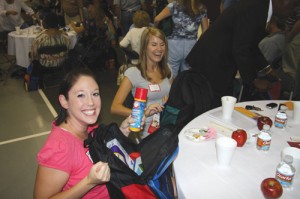 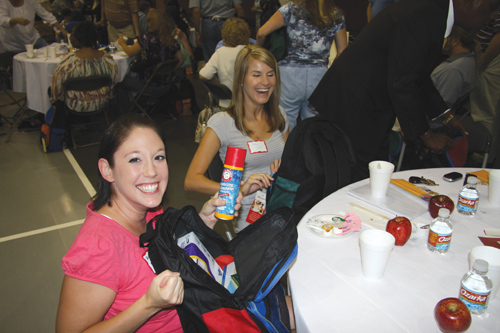 It wasn’t exactly a polished apple placed on their desk by an admiring student, but 405 teachers and administrators in the Oklahoma City Public Schools (OCPS) got a figurative hug and a pat on the back from members of Oklahoma City, Northwest Aug. 18.

The church, located at 3030 N.W. 23rd St., held its Fourth Annual Teacher Appreciation Breakfast, and the turnout surpassed expectations, despite heavy rain which fell throughout the morning.

“It was a huge success,” said Northwest member Renee Decker, who coordinated the event and reported the church had received 380 reservations prior to the breakfast. “We were really pleased with the turnout, and excited to get them started off to a great year.”

Lori Kiely, a biology teacher at Northwest Classen High School, was the first teacher to pass through the line for the 7 a.m. meal. This was the third time she had attended the annual breakfast, which featured scrambled eggs, sausage, bacon, mixed fruit, hash browns, biscuits and gravy, donuts and coffee and orange juice.

“It’s great,” Kiely said as she settled into her seat. “I think it’s pretty nice that they do this for us. It starts us out well. Everything they have given us really helps.”

Pastor Ben Brammer called the breakfast, which involved dozens of volunteers of all ages, “pastoring the city in a little way. It’s caring for the city. It’s looking at the city as our parish, and I think it’s so important to be a city on a hill as the church and not be just be in a secluded, bubble-like atmosphere. As a result, they know we’re here and they know we care for them.”

The pastor said that fact has been lived out.

“As a matter of fact, I was talking to one of our new members just the other day and they told me the reason they became members of Northwest was because of how we care for the community. Now that speaks volumes,” he said. “That’s what God calls us to do. To pastor the city. To love them, but also to speak the truth. So, this a very exciting thing to me.”

DeAnn Davis, regional executive director for 16 OCPS schools in the area surrounding the church, called the breakfast a “remarkable presence of all these people of the community that support the schools. It’s such a kind gesture, and I think all of the teachers and principals really do appreciate their efforts, but they just go so far above and beyond it’s incredible. We just love it.”

Davis said the annual breakfast really helps teachers and administrators at the schools begin the year on a positive note.

“It jump starts the school year, and makes you feel so wonderful about the community spirit that there is here,” she said. “I think sometimes the teachers feel under appreciated, but, boy, they really start the year off here with a boost this way!”

The theme of the breakfast was “Legacy.” Brammer thanked the teachers for their dedicated service to students and the legacy of learning they pass on.

Each attendee received a backpack filled with supplies, and several door prizes were given away, including a new office chair and two gas grills.

Brammer encouraged the teachers to use the supplies in their work, but to pay forward the gift by giving the backpack to a deserving student in their class whose family couldn’t afford to purchase one.

Decker said the teachers expressed appreciation for the breakfast as they left to prepare for the opening day of school, which was two days away.

“They said they had a wonderful time,” she said. “There was one school whose teachers were here for the first time, and they kept commenting on how wonderful this was, and they were so happy to be a part of it this year.”

The event was gratifying on a personal level for Decker as well.

“I have been coming to church here for three-and-a-half years, but had never been a part of this. As I got involved in it, I realized I had no idea how big it is and how special it is. I think the more I worked on it, the more awesome an experience it became for me. It’s wonderful just to be a part of a project that ministers to our public school teachers, and I think they need to know they are appreciated.

“You could really feel the energy in the room as they gathered this morning. To get them together in one room before school starts in a relaxed setting is meaningful to them, too, I think.”